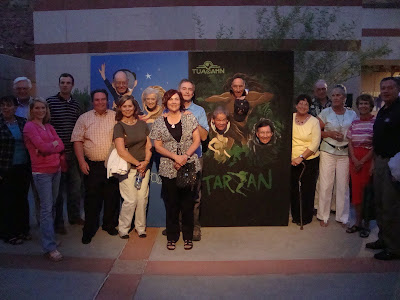 On an extra warm night in late September, approximately 35 Rotarians and their spouses, friends and family members enjoyed dinner provided by the Golden Corral Restaurant and a performance of "Crazy for You" at Tuacahn. Thanks goes to Immediate Past President Ken Sizemore (now serving as chair of the Community Service committee) for organizing this "Broadway in the desert" opportunity to socialize under the stars in the spectacular "Canyon of the Gods" - as one of 80 outstanding activities and programs in our "Challenge of 80" celebration of 80 years of SGR.
Posted by Linda Sappington at 6:21 AM No comments: 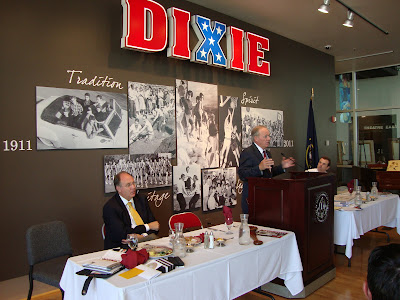 OPENING: Don Pendleton was in his usual place as Sergeant-at-arms noting the presence (or absence) of members and visitors to SGR - held this week at the Eccles Fine Arts Center on the campus of Dixie State College. Ray Robinson led members in a touching rendition of “America” and a spirited chorus of “Are You From Dixie?” accompanied on the piano by Heidi Mitchell, a talented DSC music student. Bob Bramlage invited members to follow him in the Pledge of Allegiance. Durant McArthur asked for the blessings of heaven on the meeting and the meal. Christina Schultz conducted a lucrative Horseplay, on behalf of Dixie State College, while Terance White collected fines!

ANNOUNCEMENTS: June McAfee reported the dictionaries are in and will soon be ready for distribution to 3rd graders throughout the school district. She will be in contact with those who have signed up for this service. 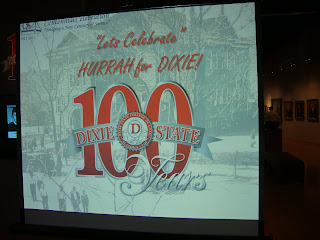 Ken Sizemore announced there are still a half dozen tickets available for tonight’s performance of “Crazy for You” at Tuacahn. Tickets are discounted to $22 each and the meal, provided by the Golden Corral Restaurant will be paid for by SGR. He also announced two upcoming service projects: October 15-16 is the International Festival as part of the Huntsman World Senior Games. Volunteers are needed to man the booth. The city of St. George has approached Ken about helping on Saturday, October 23 to plant trees at the SK8 Park. 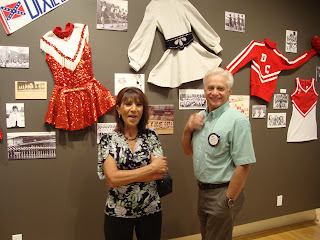 PROGRAM: Dixie State College President Stephen Nadauld spoke of the excitement on campus surrounding the 100 year anniversary of the school, noting enrollment has increased by 60% in the past three years as bachelors degree programs have been introduced bringing the head count to more than 9000 students. He also noted outreach to China has resulted in the enrollment of 2 students and the hope of up to 200 more in future years. On that note, the president added the number of minority students has increased by 120%.

Exciting things are happening on the campus. The recent DOCUtah was the first introduction to the community of this exciting documentary film festival. On February 5, the Mormon Tabernacle Choir and the Orchestra on Temple Square will perform on campus. A new 170,000 square foot library will soon be under construction. The current library will be renovated to become Math and Science Building and the building known on campus as “the NIB” (North Instructional Building) will be renovated to become the Education Department. A Centennial Pavilion will soon be completed with activities to include sand volleyball; and, the college is replacing the astro-turf on the football field. The college has recently signed an agreement with a California film company to produce infomercials, commercials and movies in partnership with DSC’s media center, which now includes KCSG-TV. The Public Broadcast System (PBS) is working on a documentary about DSC which will be aired in December . . . “and we are well on our way to becoming a college town!” said the president.

Rotarians, who enjoyed a delicious lunch prepared by DSC Campus Dining, were invited to enjoy the display of memorabilia reflecting the successes and changes on the college campus over a century.
Posted by Linda Sappington at 6:35 AM No comments:

OPENING: Don Pendleton was missing from his usual place as Sergeant-at-arms so Jack Petersen assumed responsibility for noting the presence (or absence) of members and visitors to SGR. Ray Robinson led members in a tribute to the end-of-summer rendition of “In the Good Old Summertime.” Richard Isom led members in a recitation of the 4-Way Test. Bob Miller invited members to follow him in the Pledge of Allegiance. Eldon McArthur asked for the blessings of heaven on the meeting and the meal. Bob Bramlage conducted a spirited Horseplay, on behalf of the Guatemala stove project, while Jack Petersen collected fines!

ANNOUNCEMENTS: Next week’s meeting of SGR will be held at the Eccles Fine Arts Center where Rotarians will enjoy lunch and a display celebrating the 100-Year Anniversary of Dixie State College.

President Grant announced the “Challenge of 80" program which will celebrate the 80 year anniversary of SGR (chartered January 1931) in increments of 80 (see a list of goals on the right side of the blog at http://stgeorgerotaryclub.blogspot.com).

Ken Sizemore announced Rotary Night at Tuacahn on Tuesday, September 28. SGR will pick up the dinner tab. Tickets for the performance of “Crazy for You” will be discounted to $22 each. He also noted the upcoming 3rd annual International Festival in the Town Square will be held on Friday, October 15 and Saturday, October 16. SGR will have a booth focusing on Guatemala, including a stove and information about the stove project.

Ray Robinson announced the recent introduction to Rotaract at DSC had more than 50 students in attendance thanks to the efforts of Lauren Christensen, Rotaract president.

June McAfee announced the dictionaries will soon be ready for distribution to 3rd graders around the school district.

Ken Seefeld reported on the Chamber of Commerce expo last week where 10 people signed up for more information about Rotary. 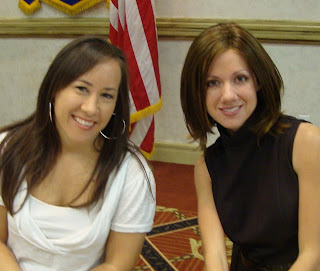 PROGRAM: West Martin introduced Jenn Watkins and Chanda Gunter from Dixie Press, the new online newspaper and radio news program. Jenn, the former editor of Today in Dixie, noted the rise and fall of newspapers in the country due to new ways to market businesses and products. According to the entrepreneur, people believe this industry has been dying for 60 years - consolidating 2-3 small newspapers into 1 in communities all across America. The threat in the ‘70's was TV news . . . and today, the traditional newspaper boy has been replaced by Comcast and Google. The high cost of doing business and the need to cut staff has also had a serious impact on the newspaper business.

The young women’s new business venture is Dixie Press which can be found online at www.sgnews.com or on radio station KZNU / 1450 am on Thursday afternoon at 4:30 pm.
Posted by Linda Sappington at 8:12 PM No comments:

OPENING: Don Pendleton was in his usual place as Sergeant-at-arms noting the presence (or absence) of members and visitors to SGR. Ray Robinson led members in an offbeat rendition of “Shine On Harvest Moon” Christina Schultz led members in a recitation of the 4-Way Test. Bob Bramlage, back after several months away, invited members to follow him in the Pledge of Allegiance. Kyle Case asked for the blessings of heaven on the meeting and the meal. Dan Strobell conducted a spirited Horseplay, on behalf of the Guatemala stove project, while Jeff Morby collected fines!

ANNOUNCEMENTS: Linda Baker reported a successful RYLA with 142 students from all across Utah, including 4 teens sponsored by SGR

PROGRAM: President Grant introduced West Martin, Program Chairman, who introduced Christina Schultz, Executive Director of the DOCUtah project who introduced Phil Tuckett, the brains and brawn behind the first ever International Documentary Film Festival at Dixie State College. An associate professor at DSC, director of the Dick Nourse Center for Media Innovation; the producer, director and writer for NFL Films; a former player for the San Diego Chargers football team; and the winner of 30 Emmy Awards for outstanding television, Tuckett shared his vision for DOCUtah. “Doing it for the love of the game,” was his answer when asked why he and college had decided to jump into this enormous project which “accepts diversity outside of our community.”

Approximately 150 films - from 487 submissions from film makers in 36 countries - will be at the centerpiece of DOCUtah, which will run from an opening night at Tuacahn on Thursday, September 16 to a closing event at the OC Tanner Amphitheater in Springdale. The documentary films will be shown at several local movie theaters in St. George, at venues in Kanab and on the college campus. Tickets are on sale at the Dixie State College box office.

Posted by Linda Sappington at 7:55 PM No comments: