Bill Gates has partnered with Rotary and other organizations committed to wiping out polio. Today, an article appeared in "USA Today" highlighting the effort. 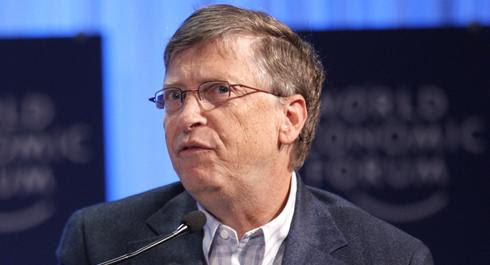 "We are on the threshold of eliminating polio once and for all," the Microsoft billionaire and philanthropist says in his 2011 annual letter, given in advance to USA TODAY and slated for public release in New York on Monday. In an interview, Gates warns, however, that outbreaks in Nigeria, Tajikistan and the Democratic Republic of Congo provide a "scary" reminder that decades of progress will be lost without sustained action.

You can read the full article on USA Today
Posted by Richard at 6:11 PM No comments:

OPENING: Don Pendleton provided a friendly greeting while noting the attendance of Rotarians and guests. Ray Robinson led members in “America the Beautiful” in honor of Human Rights Day. Quinn Hadley led members in a recitation of Rotary’s 4-Way Test of the things we think, say and do. Gil Trujillo invited members to follow him in the Pledge of Allegiance and Sam McArthur asked for the blessings of heaven on the meeting and the meal. 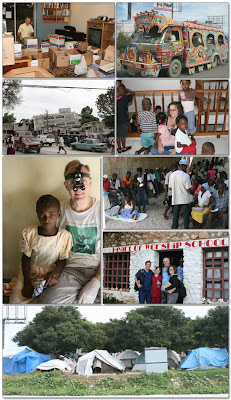 PROGRAM: Allen Hilton, his daughter Julia, and Dr. Scott Bulloch reported on their recent trip to Haiti to provide dental care. Julia was struck by the lack of infrastructure. She noted there was no power, no water, and no waste disposal. Dr. Bulloch mentioned on one trip how he had been horrified to watch a child simply drop a wrapper on the ground. He went to pick it up and then noted there was no trash receptacles, and even if there had been, there was no infrastructure to collect and dispose of it. He noted that helping Haiti can be frustrating, a lot like "trying to eat an elephant." It feels like little changes from year-to-year. He has been making trips for 8 years. He noted that he was pleased to see some progress this past year with building of new roads and he noted the introduction of heavy equipment which he had not seen before. He directly attributed the lack of infrastructure and the government for the poor living conditions. He noted the resilience and hard work ethic of the people. Allen Hilton provided several photos which give a feel for the conditions taken during their recent trip and a selection of those photos are shown above.
Posted by Richard at 9:49 AM 3 comments:

A New Member, a new Paul Harris Fellow, and the Second Ammendment

OPENING: Don Pendleton was at his post, providing a friendly greeting while noting the attendance of Rotarians and guests. Ray Robinson led members in “Let There Be Peace.” Kent Dallmeyer led members in a recitation of Rotary’s 4-Way Test of the things we think, say and do. Ken Sizemore invited members to follow him in the Pledge of Allegiance and Jenny McDowell asked for the blessings of heaven on the meeting and the meal. 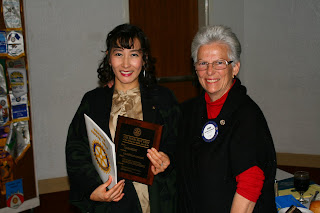 ANNOUNCEMENTS: Ray Robinson introduced David Moore and Robin Jones from the American Cancer Society who shared a request for Rotarians to participate in the upcoming Relay for Life by putting together teams or other avenues. The relay is to be held the last weekend of April. New club secretary, Richard Isom, shared announcements related to the coming weekend's All Clubs meeting including a final plea for RSVPs and a request for help Pat Trujillo make table centerpieces reflecting the spirit of our club. Mayor McArthur reminded members of the grand opening of the new airport Wednesday at 2:30 p.m. and also invited all to attend the city's birthday celebration on Saturday including free root beer floats at the Opera House, free swimming at the Aquatics Center a free rides on SunTran.

CLUB BUSINESS: Phil Hall honored the club's latest Paul Harris Fellow, Les Stoker, for his contributions to the Rotary Foundation. Jenny Lee was inducted as the newest member of the club by board member, Jenny McDowell. 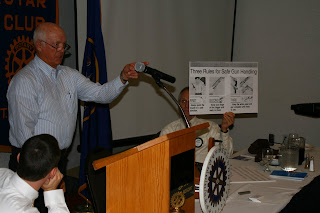 PROGRAM: Allen Hilton introduced Brent Jensen, whom, he joked, "had forgotten more members names than he had ever known." Brent shared about the Southern Utah Shooting Sports Park which provides a facilities for safe training and practice with firearms for sport and for protection. He highlighted the importance of our Second Amendment right to bear arms in preserving freedom, quoting from several founding fathers on the subject. He cited statistics that also show that a citizenry with unrestricted access to guns reduces violent crime. He noted that 38 states have an agreement to honor each other's concealed carry permits. He debated the benefits of requirements for proper training and permits balanced with the need to not infringe on the right to bear arms. He noted that since hunter education was instituted in Utah in 1957 that hunting related deaths dramatically decreased. Last year their were no hunting related deaths in Utah. Education is also a key in teaching kids to be safe around guns and Brent pointed to the Eddy Eagle program which teaches kids to "Stop. Don't Touch. Leave the Area. Go Tell and Adult." He shared a story where this training had protected a little girl and her younger siblings.
Posted by Richard at 7:18 PM No comments:

All About the New Airport

OPENING: Don Pendleton was at his position as Sergeant-at-Arms, noting the presence (or absence) of members attending SGR’s first weekly meeting of 2011. Ray Robinson led members in “Jingle Bells.” Kyle Case led members in a recitation of Rotary’s 4-Way Test of the things we think, say and do. Durant McArthur invited members to follow her in the Pledge of Allegiance and Terrance White asked for the blessings of heaven on the meeting and the meal. 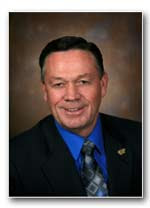 ANNOUNCEMENTS: President Grant Carter read a letter of resignation from Dean Terry thanking the club for their friendship and inviting members to visit individually or as a group at his ranch. It was also announced that the change of the former Rotary Bowl organization to a St. George Rotary Club foundation was nearly completed. PDG Gil Trujillo made an announcement regarding the All Clubs meeting January 15th to be held at the University of Utah. DG Penny Atkinson would like all who can attend from our club to join them and has shared a video at http://www.youtube.com/user/UtahRotary. Nancy Neff shared thanks to all those who helped as bell ringers for the annual Salvation Army drive.
PROGRAM: Our own, Mayor Dan, began with a poem encouraging us to step out and do what others say can't be done and then related that to the long journey that will culminate with the opening of the new St. George airport on January 12. He noted that there are a lot of rumors about the airport and that one of his goals was to help dispel the rumors with truth. A copy of the latest issue of "Inside St. George" was displayed and it was noted that most members had likely already received a copy which highlighted the history of the airport project.
The site for the new airport was also the site of a former airstrip built in the 1940's. It was selected because it was the most ideal spot due to lack of surrounding building, proximity to the industrial parks, and that a large chunk of the needed land was already owned by the city, in addition to geographic and geologic factors. The bulk of the funding for the new airport came from the FAA from funds they receive on ticket purchases and other fees. As a requirement to receive the funds for the new airport, the city must close the existing airport site. This is due to limitations at the existing site that create violations to FAA safety rules. 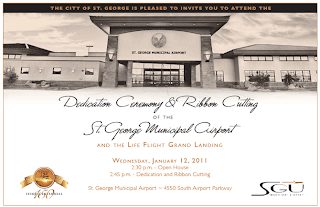 The airport was built with an eye to accommodating future needs including jet service and air freight service. The city is currently actively marketing to get flights to other locations. SkyWest will continue to provide daily flights to Salt Lake City and recently announced flights to Los Angeles.
The airport will open January 12th with a dedication ceremony to be held at 2:30 p.m. It was announced that President Dieter F. Uchtdorf of the Church of Jesus Christ of Latter-day Saints First Presidency will give the dedicatory prayer. He was an aviator prior to his church call.
Posted by Richard at 7:52 PM 2 comments: