OPENING: Don Pendleton was at his position as Sergeant-at-Arms, noting the presence (or absence) of members attending SGR’s last weekly meeting of 2010. Ray Robinson led members in “Silent Night.” Bob Bramlage led members in a recitation of Rotary’s 4-Way Test of the things we think, say and do. Debbie Justice invited members to follow her in the Pledge of Allegiance and Steve Radmall asked for the blessings of heaven on the meeting and the meal. 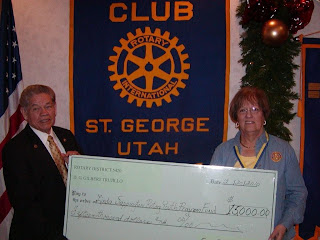 ANNOUNCEMENTS: PDG Gil Trujillo presented a check in the amount of $15,000 which represents unexpended funds from the Utah Rotary District Conference in May. These funds will fund such Rotary youth programs as Youth Exchange, RYLA, Rotaract and Interact.

Ken Sizemore and SGR’s nominating committee conducted election of officers to serve with Linda Baker during FY2011-12. Durant McArthur was selected to serve as President Elect-nominee. Board members elected are Janet O’Riley and Lowry Snow. Quinn Hadley will serve on the Youth Committee. 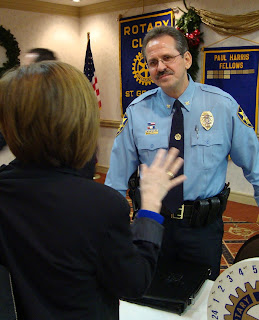 PROGRAM: Marlon Stratton, Chief of the St. George Police Department for more than 10 years, shared information about his agency, which includes 104 officers, 45 civilian employees and 30 volunteers. Working together, the department strives to deal with issues of crime not visible to the community through five divisions: patrol, investigation, special enforcement, traffic, and administrative services /communications.

The chief noted he is frequently asked how the downturn in the economy has affected the local crime rate. According to the law enforcement administrator, the economy has created a decrease in the population, but there has been an increase in thefts and burglaries. The newest challenge for the department is prostitution, which always involves drugs and violence. Fighting drug use “is like trying to drink from a fire hose,” notes the chief. “It is a fulltime problem requiring a lot of manpower.” Prescription drugs, heroin and marijuana are the three biggest addictions and implicated in criminal activities at least 99% of the time. Gangs are a continuing problem, too, with more than 600 gang members in Washington County.

On the positive side, graffiti is down by 42% because of the city’s policy of removing it within 24-48 hours. VIPS (Volunteers in Public Service) are a real boon to the city’s efforts to control crime during a time when the SGPD’s budget has been cut by 18%.
Posted by Linda Sappington at 1:55 PM No comments: 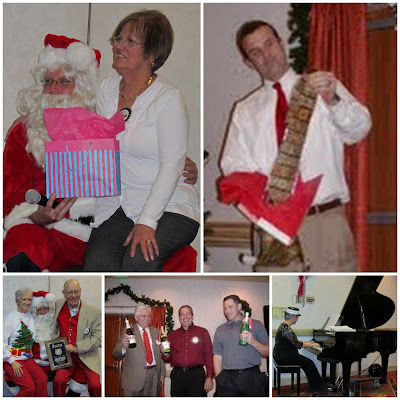 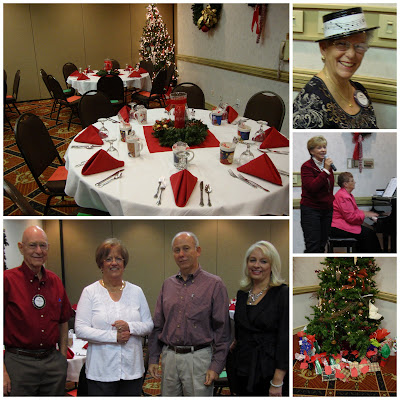 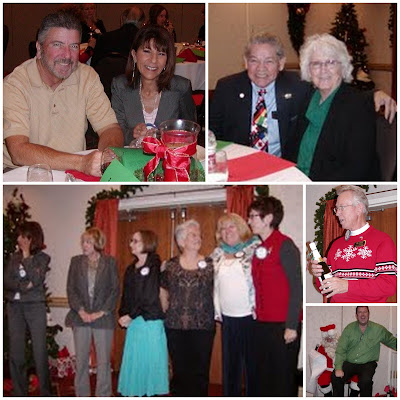 OPENING: Don Pendleton was at his position as Sergeant-at-Arms, noting the presence (or absence) of members and spouses attending SGR’s annual Christmas party at the Holiday Inn. Ray Robinson led members in a festive rendition of “Joy to the World.” PDG Gilbert Trujillo led members in a recitation of Rotary’s 4-Way Test of the things we think, say and do. Eldon McArthur invited members to follow him in the Pledge of Allegiance, after which Jim Coleman asked for the blessings of heaven on the meeting and the meal.

PROGRAM: The food was sumptuous and plentiful, there was animated conversation at every table and gifts for everyone distributed by Santa Claus. Members of SGR were entertained by Jenny McDowell who brought her hat to the keyboard for a couple of lively ragtime piano numbers and Jan Gardner, accompanied by Marilyn Hickman, sang “My Grown Up Christmas List.” The party ended with the presentation of Rotarian of the Year to Ray Robinson, who serenaded Ruby as his partner in all-things-Rotary; and, the presentation of a gift from members of SGR of a digital camera to Linda Sappington who will be leaving the club after next week for 18 months in the West Indies LDS mission. Everyone appeared to go away filled with good food, good company and an enhanced holiday spirit.
Posted by Linda Sappington at 11:22 AM No comments:

OPENING: Don Pendleton was at his position as Sergeant-at-Arms, noting the presence (or absence) of members attending SGR’s weekly meeting at the Holiday Inn. Ray Robinson led members in a festive rendition of “Jingle Bells.” Kyle Case lead members in a recitation of Rotary’s 4-Way Test of the things we think, say and do. Dan Strobell invited members to follow him in the Pledge of Allegiance, after which Allen Hilton asked for the blessings of heaven on the meeting and the meal. Carl Riek conducted a spirited Horseplay while Greg Basso collected fines on behalf of The Learning Center for Families.

Ken Sizemore announced the nominating committee will be ready on Monday, December 20 for the election of a president-elect (nominee) and two directors to serve in 2011-12.

Nancy Neff expressed her appreciation for Rotarians who have already taken a turn ringing the bell for the Salvation Army’s Red Kettle Campaign, but she still needs more volunteers. Please contact her if you can help in this worthy cause in support of such local agencies as the Community Health Center, the Doctors’ Volunteer Clinic, Dixie Care and Share and the Hope Pregnancy Center.

The Rotary Christmas party will be held on Monday, December 13 (noon - 2 p.m.) Please notify Linda Sappington with the number of guests you will be bringing.

PROGRAM: Allen Hilton introduced Dan Wyson, a local investment counselor, who shared information on the current economic outlook for the community, calling “investments, an art . . . not a science.” He noted “a recession is a good thing because it is an economic diet, although this one has been painful.” Right now, according to the financial expert, there are “billions on the books of large corporations across America, but no one is spending because everyone is scared because they don’t know what the government is going to do next!” His predictions for the future? “Unemployment rates are not going to go down very quickly, but this is a great time to invest.”
Posted by Linda Sappington at 6:58 AM No comments: