Board member reports were the order of the day on Monday, August 14, 2017.

Foundation Chair Dave Prisbrey spoke on how donations to RI “come back to us in 3 years.He also explained the concept of EREY and encouraged members to support the RI Foundation.

Secretary and PI Chair Linda Sappington asked each member to review his/her bio on the club website and update as needed.She also indicated Brandon Staples will be assuming some responsibility for keeping the website current and for expanding our social media presence. In her role as PI chair, Linda noted the more involved in “service above self” our club is, the more opportunities to “say Rotary” in our club and community.

Grant Carter, Membership Chair, shared some thoughts from the book “How We Decide” noting Rotary is famous for comradry and an environment where friendships can grow, but most members don’t know enough about RI to be able to share their knowledge with others. “We are missing members who either don’t attend or who have left our association,” he noted.“Imagine all the good we could do if everyone took part.”

PEN Brandon Staples spoke on how to get the word out about all the good Rotary does in the world. He encouraged members to get in the habit of posting pictures on social media … of club activities, club socials, and provide Rotary marketing materials and display the 4-Way Test in our offices.

In the interest of time, President Rulon and PE Lynn Beecher will report at another upcoming meeting.
Posted by Linda Sappington at 3:52 PM No comments: 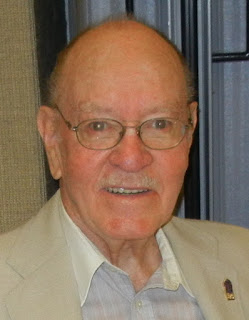 Ray Robinson had five loves in his life:  first and foremost, his wife Ruby with whom he was almost inseparable; his family, including a deceased daughter Linda and a son Kelly as well as 7 children (Glenda, Bonnie, Laurie, Mike, TJ, Ray, Jr. and Pat); 26 grandchildren, 82 “greats” and to date, 5 great-great grandchildren.

Ray also loved his country for which he served in the U. S. Army in World War II and recalled numerous experiences in Japan during the “clean up” period after the Armistice.

He also loved his Church.  A longtime member of the Church of Jesus Christ of Latter-day Saints, Ray and Ruby spent several years as team teachers in the 7-8 year-old Primary class.  The calling he held at the time of his death was that of a greeter before Sacrament meeting – an assignment he performed faithfully every week until his health deteriorated.

And, finally, he loved Rotary!   His legendary “service above self” attitude included several years on the board of St. George Rotary including a year as president (RY2000-01); 10 years hosting – with wife Ruby – numerous foreign exchange students in their Bloomington home.  For his support of Rotary youth program’s Ray was named Utah Rotarian of the Year a few years ago.  He had 19 years of perfect attendance, due in part to his role as club song leader.  He never wanted to miss leading his Rotary friends in a rousing rendition of “God Bless America” or what he called “the tootsie wootsie song.” 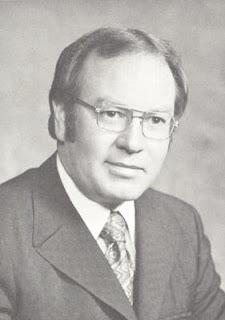 He was also involved in his community, serving on boards of the United Cerebral Palsy Association, Chamber of Commerce, American Cancer Society, and the Salt Shakers both in Salt Lake City – where he was President and CEO of Rio Grande Building Products, a commercial hardward firm – and in St. George where they retired in 1999.

One of the Robinson’s favorite self-appointed services was waiting at the bus stop every morning to be certain the neighborhood children got safely on the school bus.   This simple act earned them the name of “bus stop grandparents,” a title he wore with honor.

Ray also enjoyed golf, music, woodworking, outdoor activities, but was never too busy to spend time with any family member who needed his attention or wisdom.

Ray passed from this life on Tuesday, August 8, 2017 at his Bloomington home after a short battle with esophageal cancer.  He will be missed by those of us who knew and loved him and whose service impacted their lives in many, many ways.
Posted by Linda Sappington at 2:58 PM No comments: