OPENING: Sergeant-at-arms Don Pendleton was on duty greeting members and visitors to St. George Rotary. Ray Robinson led the SGR Choir in a harmonious rendition of the first and last verses of “America the Beautiful.” Kris Neal invited members to follow her in the Pledge of Allegiance. Ken Sizemore asked for the blessings of heaven on the meeting and the meal and Don Pendleton led members in a recitation of the 4-Way Test. Sam McArthur took to the podium for a spirited Horseplay while Dan Strobell collected fines in support of Kris Neal’s feral cat program.

Phil Hall indicated some members have asked whether it is too late to take advantage of matching funds for Paul Harris Fellows. He will check and report back next week.

Greg Basso asked for volunteers to help with his backpack project on Friday, July 30 at 10 a.m. at Shepherd of the Hills Methodist Church. 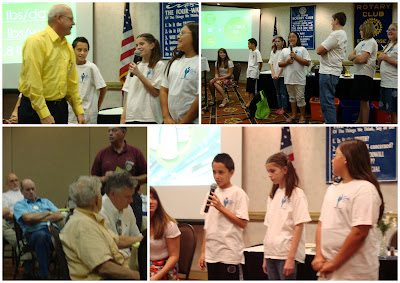 PROGRAM: Linda Sappington introduced the program which featured members of the Youth Volunteer Corps of Washington County with team leaders Becky Cox, an AmeriCorps member assigned to Community Education and Kayla Shenfeld, a VISTA Summer Associate at the Volunteer Center of Washington County. More than 30 youth volunteers between the ages of 11-14 are taking part in the Summer of Service “100 Hours in 100 Days” program where they are learning to “Reduce, Reuse and Recycle” and sharing their knowledge and expertise through the production of public service announcements currently running on Canyon Media’s Planet 94.1 radio station; TV ad spots and power point presentations explaining the problems associated with nearly 40,000 pounds of discarded plastic, metal, glass and paper per year for every American! The kids have taken a field trip to the landfill, learned marketing techniques at the Dick Norris Communication Center at Dixie State College and are planning a tour and service project at the Habitat for Humanity ReStore and will make a presentation to the Washington County Commission in early August. St. George City Mayor Dan McArthur answered the students’ questions about the city’s recycling efforts. At the end of their 100 hours, each student will receive a $500 education award from the Corporation for National and Community Service which can be used anytime in the next ten years at a college or university of their choice.
Posted by Linda Sappington at 8:32 PM No comments:

OPENING: Ray Robinson conducted the SGR Choir in a rousing rendition of “Home on the Range” in honor of Pioneer Day. Gil Trujillo invited members to follow him in the Pledge of Allegiance. Terance White asked for the blessings of heaven on the meeting and the meal. Rick Schofield led members in a recitation of the Rotary 4-Way Test.

President Grant asked for volunteers to serve as the club’s CANstruction team. See Linda Sappington for more information or to volunteer. 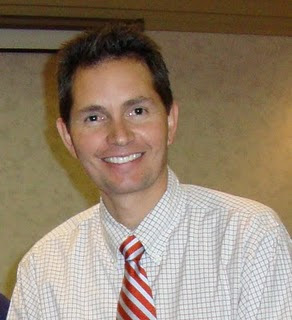 PROGRAM: Grant Carter introduced new members Richard Luekenga, Jr. and Kip Bowler who reported on their lives and times! Richard Luekenga noted his name is of German origin, while he is from Richfield; served an LDS mission in Argentina; and, as a former student at Utah State University, he is proud to call himself an Aggie. He studied for a career in audiology in Louisville, Kentucky, then moved to St. George in 2005 where he joined with three other healthcare professionals to create the Dixie Hearing and Balance Center, 630 S. 400 East. In his practice - closely tied to Intermountain Health Care - he treats hearing and balance disorders in infants to adults of all ages.

In his spare time, Richard enjoys basketball, football, water and snow skiing, and golf (“I’m a sandbagger of sorts”).

Luekenga was brought into the club by Ray Robinson, but introduced to the principles of Rotary as a child by his father who “was the 4-way test in action!” 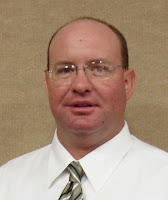 Kip Bowler, a loan officer at the Village Bank, has “lived in St. George my whole life.” Descended from pioneers who came to this region in the late 1800's, Bowler is a graduate of Southern Utah University who lives in Gunlock with his wife and three children. In his spare time, he is also involved in the livestock industry and enjoys roping and riding.

Sponsored by Phil Hall, Kip has Rotary in his blood. His grandfather, Truman Bowler was a longtime member and served as president of St. George Rotary in 1978.
Posted by Linda Sappington at 7:07 PM No comments: 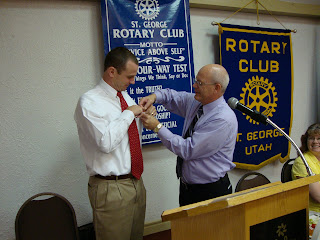 OPENING: Sergeant-at-arms Don Pendleton was on duty greeting members and visitors to St. George Rotary. Ray Robinson led the SGR Choir in a happy rendition of “In the Good Old Summer Time” (otherwise known as the “Tootsie Wootsie” Song. Lee Sheets invited members to follow him in the Pledge of Allegiance. Nick Lang asked for the blessings of heaven on the meeting and the meal.
President Ken Sizemore welcomed PDG Gil Trujillo home after a year of running up and down the freeway visiting everyone of Utah’s 44 clubs. 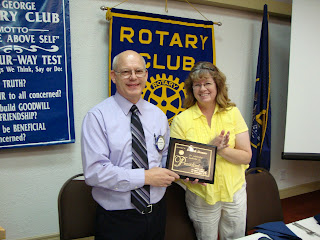 PROGRAM: President Ken called his “a great year. Despite the impact of the economic downturn which resulted in a major loss in membership, we have ended the year with a half dozen new and enthusiastic members bringing the total from 63 to 69 with 2-3 more putting in applications!” Ken also noted how much he and Barbara enjoyed the opportunity to attend the RI Convention in Birmingham, England “where members become Rotarians!”
During the year, the club enjoyed a Halloween Social at Staheli Family Farm and a memorable Christmas party planned by Shar Heitkotter and Greg Basso. “The low point in my year as president was when the decision was made to do away with the Dixie Rotary Bowl . . . the high point was the accomplishment of my personal goal to have ‘boots on the ground in Guatemala.’”
President Ken also recognized Linda Sappington for chairing the Utah Rotary District Conference in May then distributed Distinguished Service Awards, as follows:
* Doug Seefeld (for giving up his two week vacation to review and reorganize SGR’s bookkeeping)
* June McAfee (for taking the Dictionary Project to a whole new level) 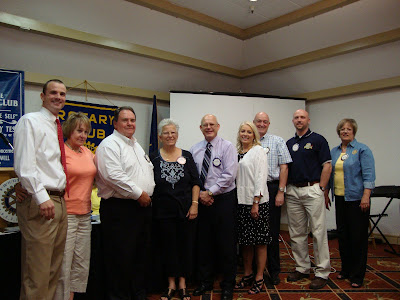