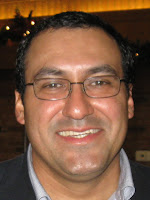 Dr. Carlos Mercado is one of the newest members of St. George Rotary. "As soon as I open my mouth, you can tell I'm not from southern Utah," jokes the medical director of the new Liberty Dialysis Center, one of 70 such rural and outlying clinics across the United States. Liberty Dialysis in St. George is located at 1173 S 250 W, #402. Born in Columbia, South America, the Nephrologist (specialist in the function and/or diseases of the kidneys) spent much of his young life in New York City. One of three children of educated parents - his mother was fluent in six languages, his father also a Nephrologist and both his brother and sister are engineers - Carlos graduated from medical school in Columbia, then completed his 3-year residency in Miami where he was the first non-Jewish physician at Cedar Sinai Medical Center. From Miami, Carlos practiced in Ft. Lauderdale, Florida then accepted a position as the medical director for a dialysis center in Greenfield, North Carolina.

On December 19, 2007, Dr. Mercado became a resident of St. George "We are very happy here but I'm going to talk to the Chamber of Commerce about the snow," he joked. "There was nothing on the subject in their relocation packet, but we love the warm weather and find the people to be very nice!"
His membership in SGR has also been a pleasant experience. Though he struggles to attend regularly due to his busy schedule, when he is able to be to meetings he finds it "a good opportunity to socialize, relax and have a few laughs."
Posted by Linda Sappington at 8:01 AM No comments: 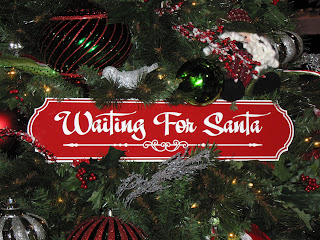 Three days before Christmas, Bob Bramlage, SGR's new Sergeant-at-Arms was on duty greeting Rotarians and other visitors to the 3723rd regular weekly meeting of St. George Rotary. Ray Robinson lead the SGR Choir in the holiday favorite "Silent Night" followed by "We Wish You a Merry Christmas." Our very own Flag Man Lee Warren invited members to follow him in the Pledge of Allegiance and Dan Strobell asked for the blessings of heaven on the meeting and the meal. Reed Noble conducted a lucrative Horseplay in support of Coins for Kids while Durant McArthur collected fines.
President Jeff expressed the thanks of the entire club to Greg Basso, Shar Heitkotter, and Bob Bramlage for a great Christmas party held last week.
Reed Noble indicated the nominating committee had found "a glitch in the bylaws" and asked the board to review the changes which will reflect the election for two years of a secretary and treasurer. Linda Sappington will continue as secretary for a second year, but Ken Seefeld will assume responsibility as Treasurer when Mark Armstrong steps down. Nominations for two new 2-year board positions and for president in a couple of years, will take place on January 5 with the election to follow on January 12. Thanks to Reed and his committee including Byron McLeese, Ken Sizemore and Nick Lang.
President Jeff also reported a check in the amount of $550 has been received from Rotary International. This simplified grant supports the Dictionary Project.
Gil Trujillo reminded members of the upcoming All Clubs Luncheon in Salt Lake City on January 6. Former RI president Frank Devlin ("Create awareness . . . take action!") from Mexico City will be the featured speaker.
Ken Sizemore reminded members to complete the Member Satisfaction Survey. To date, only 19 from among SGR’s 93 members has been returned. Although most comments were positive, Ken indicated there is a shortfall in areas of "member orientation and education, public relations and concerns about the increasing level of fines during Horseplay." He also indicated some of the surveys suggest a need for more information about the Rotary Foundation, current opportunities for club service and the need for a better microphone. Ken also indicated some members’ spouses were concerned about the amount of time required to be a Rotarian.
The program involved Classification Talks by Chad Michaeli, Carlos Mercado and Richard Brown. See the blog page to "Meet Chad Michaeli" and "Meet Richard Brown" and watch for "Meet Carlos Mercado!"
Posted by Linda Sappington at 5:22 PM 1 comment: 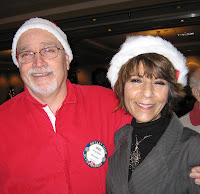 Rotarians and spouses gathered on Monday, December 15 for the 3722nd meeting of St. George Rotary Club and SGR's first ever daytime Christmas party. Ray Robinson lead the SGR Choir in a festive rendition of "Jingle Bells" followed by a harmonious version of "Joy to the World."

Lee Warren led members in the Pledge of Allegiance. Sterling Spafford asked for the blessings of heaven on the meeting and the meal - which included a choice of prime rib, ham or turkey. 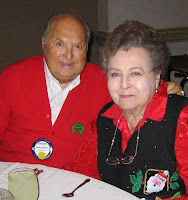 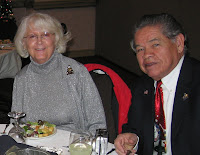 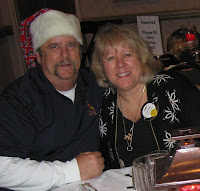 President Jeff also announced the formation of the Nominating Committee with Reed Noble as chair, along with Nick Lang, Byron McLeese and Ken Sizemore. Nominations will take place on January 5. Elections will be held on January 12. 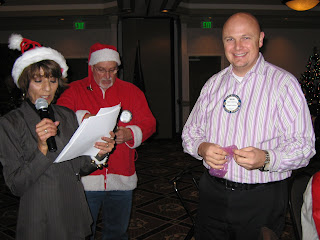 A special thanks to the Holiday Inn for their outstanding service to SGR during 2008. 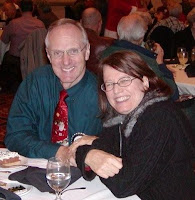 Chaired by Shar Heitkotter, Greg Basso, Bob Bramlage and Jack Petersen, the party was a laugh-riot-a-minute as Santa's elves distributed hand selected gifts ranging from shower caps to stuffed toys, candy bars and other goodies. Thanks to everyone involved . . . and Merry Christmas to you and yours!!! 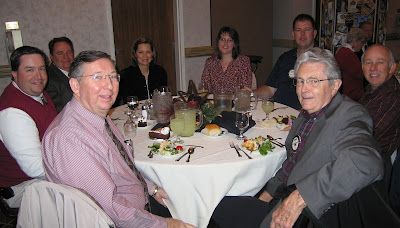 Posted by Linda Sappington at 6:59 PM No comments: 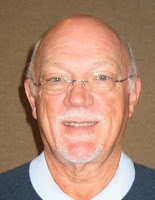 Probate attorney Richard Brown is SGR's newest member (inducted Monday, December 8) sponsored by Ken Seefeld. Richard practiced law in the state of Washington for more than 38 years before returning recently to his Utah roots. Born in Logan, he and his family relocated to the state of Washington when he was 10-years-old. A graduate of Olympia High School and the University of Washington with a BA degree, Richard went on to also graduate from the University of Utah Law School - so any allegiance to a sports team is somewhat muddled, he jokes! He currently limits his practice to estate planning and probate but during his legal career in Washington he also served many years as a City Attorney. The most well known of the cases in which he was involved was that of Mary Kay Letourneau. "I was only involved peripherally," states Brown, "but it was an interesting and high profile case which got a lot of media attention."

He and his wife, Anne are the proud parents of six young adults - including two they adopted from Costa Rica. He and Anne also enjoy their role as grandparents to 17. In his spare time, Richard enjoys golf, pickleball, bridge, reading and watching football on TV.

This Rotarian was a member of the Des Moines, Washington Rotary Club for five years and was hopeful there would be an opportunity to belong to "this wonderful organization when we moved to SunRiver. That club did not materialize, so I jumped at the chance when Ken suggested I join St. George Rotary."
Posted by Linda Sappington at 5:14 PM No comments: 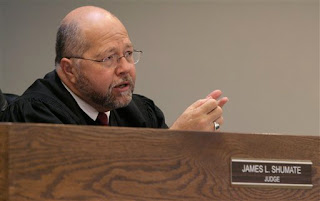 Rotarians and visitors gathered on Monday, December 1 at the Holiday Inn for the 3720th meeting of St. George Rotary. Ray Robinson lead the SGR Choir in a rousing rendition of "You’re A Grand Old Flag!" Lee Warren ("the flag man") invited members to follow him in the Pledge of Allegiance and Durant McArthur asked for the blessings of heaven on the meeting and the meal. Shar Heitkotter conducted a very abbreviated Horseplay with Jack Petersen collecting fines in support of Coins for Kids.
Announcements: Representatives from the two teams participating in the Jr. Rotary Bowl were on hand to introduce team members from Desert Hills Middle School and Hurricane Middle School.
Congratulations to David Clark, newly appointed Speaker of the Utah House of Representatives. Dave appointment is the first in more than thirty years a representative from southern Utah has held this high position.
Richard Isom reminded members of SGR to order their DRB souvenirs, sign up for the golf tournament and collect their tickets for the 23rd Army Band Concert and the DRB Banquet where Rod Zundel will emcee and Phil Tuckett will be the keynote speaker.
Program: Jeannine Holt introduced Judge James Shumate from the 5th District Court who shared his insight on judicial proceedings as well as issues relating to drug use in the community. According to the Judge, the new courthouse came as "a really sweet deal . . . a perfect coming together! The city needed more space, so they took the current courthouse. West Elementary School was outdated and needed to be replaced, so the courts got the Tabernacle property and the school district was deeded property by the city. It was a ‘win-win’ all the way around!" The current courthouse includes four small courtrooms, but only one is designed for jury trials. "We have seen some high profile cases in the past year or two which has tied up all available space and made for a whole lot of ‘hurry up and wait’. The 5th District Court sees about 10,000 cases a year, so we have to keep things moving," noted the judge. The new $29 million building will include 8 courtrooms, including one designated for federal court. "Hate and discontent is my stock-in-trade," stated Shumate who also noted "case fillings are rising as economic indicators fall!"
Shumate also oversees Drug Court which has a 22% recidivism rate compared to Purgatory Correctional Facilities 82% recidivism. About 1/3 are heroin addicts. "We haven’t had a case involving a meth lab in about two years because our addicts have switched over to heroin which is cheaper and freely available in Las Vegas - though it is absolutely fatal if abused," notes the judge. Over the past 9 years, more than 360 have graduated from Drug Court which costs approximately $4000 annually compared to $50,000 for a year in prison. "This is a very effective and worthwhile program. We are saving lives one human being at a time," states Shumate.
Posted by Linda Sappington at 6:42 PM No comments: