"Be Careful Out There" is WCF Message

OPENING: Jack Petersen assumed responsibilities as SGR’s Sergeant-at-Arms greeting Rotarians and other visitors to the 3751st regular weekly meeting of St. George Rotary. Ray Robinson lead the SGR Choir in two verses of "Home on the Range" in honor of Pioneer Day. Jeff Morby invited members to follow him in the Pledge of Allegiance and Phil Hall asked for the blessings of heaven on the meeting and the meal. Steve Radmall conducted a high energy Horseplay with fines collected by West Martin on behalf of the CANstruction project.

ANNOUNCEMENTS: President Ken read a letter of thanks from a recent Sterling Scholar recipient and announced the upcoming SGR board meeting on Thursday, July 30, 7:15 a.m. at his office.

Utah Rotary District Governor Gil Trujillo will pay an official visit during the regular luncheon meeting of SGR on Monday, August 10. Members of the board will meet with the RDG for approximately an hour following the luncheon. 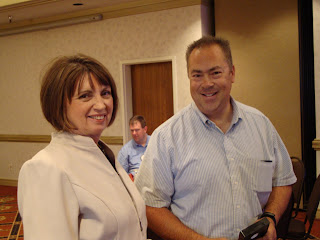 PROGRAM: Linda Baker, Vice President and manager of the local office of Workers Compensation Fund, introduced David Brogley, WCF’s 13-year Senior Safety and Loss Consultant who shared tips on staying safe in the home and the workplace noting there are more than 27 million injury accidents a year in the U.S. resulting from poor safety choices. According to Brogley, "the pain and anguish of injury can be avoided with just a minute of thought." He also encouraged members of SGR to "be careful out there!"
Posted by Linda Sappington at 6:14 AM No comments:

OPENING: Terance White served as SGR’s Sergeant-at-Arms greeting Rotarians and other visitors to the 3750th regular weekly meeting of St. George Rotary. Ray Robinson lead the SGR Choir in "God Bless America." Richard Brown invited members to follow him in the Pledge of Allegiance and Kyle Case asked for the blessings of heaven on the meeting and the meal. Grant Carter conducted a spirited Horseplay with fines collected by Jack Petersen in support of CANstruction.

ANNOUNCEMENTS: Gary Benson reported on a $500 corporate sponsorship for the Dixie Rotary Bowl. Through a partnership with Dixie State College, local businesses and individuals can get a full sponsorship package - including advertising in the local media - for this low price. PROGRAM: New SGR president Ken Sizemore reported on his experience attending the Rotary International Convention in Birmingham, England. In recognition of the historic moon walk on July 20, 1969, Ken showed a video clip of the event which astronaut Neal Armstrong called ". . . one small step for man, one giant leap for mankind!" President Ken also shared video clips of the presentations made during the opening plenary session at the RI Convention by United Nations Secretary-General Ban Ki-moon and RI President Dong Kurn Lee; and a tour of the House of Friendship. President Ken then reflected on his conversion to the Objects of Rotary through attending conventions and assemblies; and, distributed the Proposed Committee structure spreadsheet.
Posted by Linda Sappington at 9:30 AM 1 comment:

OPENING: Terance White is beginning to put names and faces together in his new assignment on SGR’s board. To accomplish his goal of getting to know everyone, he took attendance and greeted Rotarians and visitors to the 3749th meeting of SGR. Ray Robinson conducted the SGR choir in a particularly harmonious rendition of “America the Beautiful.” Shar Heitkotter invited members to follow her in the Pledge of Allegiance. Phil Hall lead members in a recitation of the 4-Way Test. Lee Sheets asked for the blessings of heaven on the meeting and the meal. President Jeff called for a 1099 vote in the amount of $3 per member in lieu of Horseplay.

ANNOUNCEMENTS: President Jeff announced an increase in monthly dues from $50 to $60 since the club has been losing money monthly due to the increase in RI fees and voluntary contributions for Polio Plus, EREY and other Rotary costs. Greg Basso voted against the action, but all other members voted in favor. 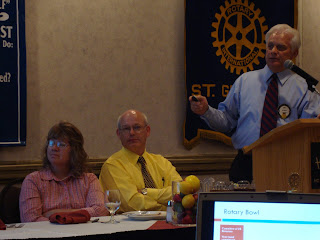 PROGRAM: President Jeff shared a retrospective of his year in the form of a power point presentation, reminding members of the fun and service provided to the club and the community since July 2008. “It wasn’t all good news. We lost 17 – but gained 8 new members - bringing our total membership to 82. On the other hand, we met our commitment to Polio Plus, improved the Rotary Bowl in numerous ways; held an orientation for new members and reactivated a few others; and had 75% of our members fulfill their commitment to EREY.” According to Jeff, “this year we strengthened our Interact clubs, purchased another 22 wheelchairs, contributed $30,000 to the purchase and installation of stoves in Guatemala and distributed 2100 dictionaries to 3rd graders in 74 Washington County classrooms.”

“Service above self” awards were given to Gary Benson for his efforts to organize the Washington City Cotton Days parade and for his service as the Rotary chauffer; Shar Heitkotter and Greg Basso for being Santa's elves. Shar was also recognized for her service as chair of the DRB committee and Greg was recognized for his efforts to promote the wheelchair program. Linda Sappington was recognized as the club's Super Blogger. Gil Trujillo received an award as southern Utah's Rotary ambassador (and the rest of the list will have to wait until I get home from Denver). 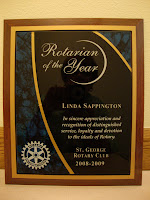 Special recognition was given to Ken Sizemore, Grant Carter, Linda Baker, Linda Sappington, Ken Seefeld, Kris Neal, Mark Armstrong, Terance White, Kerry Hepworth, Bob Bramlage, Reed Noble and Allen Hilton were given special thanks for their support of Jeff Morby during his year as president in 2008-09. Linda Sappington was named 2009 Rotarian of the Year.

Ken Sizemore was inducted as 2009-2010 president. Board members who will help him meet his goals include Ken Seefeld as treasurer, Kris Neal as assistant treasurer, Linda Sappington as secretary, Linda Baker with responsibilities for club administration. Terance White and Grant Carter will oversee recruiting and retaining members; with Phil Hall with responsibilities for the programs of the Rotary Foundation; Jerry Rasmussen coordinating service in the community and the world; and Bill Fowler managing duties relating to public information.
Posted by Linda Sappington at 4:52 PM No comments:

What's Black and White and Read All Over?

OPENING: Jack Petersen assumed responsibilities as SGR’s Sergeant-at-Arms greeting Rotarians and other visitors to the 3748th regular weekly meeting of St. George Rotary. Ray Robinson lead the SGR Choir in "Let Me Call You Sweetheart. Stan Gubler invited members to follow him in the Pledge of Allegiance and June McAfee asked for the blessings of heaven on the meeting and the meal. Dan Strobell conducted a high energy Horseplay with fines collected by West Martin on behalf of the Guatemalan stove project.
ANNOUNCEMENTS: Gil Trujillo was welcomed back from the Rotary International Convention in Birmingham, England where he was impressed by talks by Desmond Tutu, Jane Goodall and other outstanding world and Rotarians leaders.
There will be no meeting on Monday, July 6, but members and spouses are invited to attend the installation of officers on Monday, July 13.

PROGRAM: Donny Welch, publisher of The Spectrum and Daily News, gave an impressive power point presentation relating to readership and new features being planned for his newspapers. He noted the current adult readership of the local papers is up 3.5% - higher than it has ever been in their entire history; and, 75% of the 18-34 year old demographic are regular readers - outpacing all other Gannett publications in most categories. In addition to the print products of the paper, http://www.spectrum.com/ sees 135,000 unique visitors every month and there is a substantial increase in Sunday readership, "probably due to coupon clippers in a bad economy!"

His staff of 117 full time equivalents is working hard to develop quality products to attract and meet the need of new businesses as far north as Beaver. Welch also indicated they are working on a program to "giveaway $150,000-$200,000 in advertising over the next few months."
Posted by Linda Sappington at 8:12 PM No comments:

OPENING: On Monday, June 22, Bob Bramlage, SGR’s Sergeant-at-Arms, greeted Rotarians and other visitors to the 3747th regular weekly meeting of St. George Rotary. Ray Robinson lead the SGR Choir in a rousing version of "Take Me Out to the Ballgame." Phil Hall invited members to follow him in the Pledge of Allegiance and West Martin asked for the blessings of heaven on the meeting and the meal. Shar Heitkotter conducted a high energy Horseplay with fines collected by Richard Brown on behalf of the Guatemalan stove project.

PROGRAM: President Jeff expressed his appreciation to Dixie State College for their willingness to partner with SGR and the Dixie Rotary Bowl foundation. Coach Ron Hahn, head coach for DSC Football Team expressed appreciation to Ali Threet and Vasu Mudliar, new President of the Dixie Athletic Booster Club and elaborated enthusiastically on the upcoming football season with six away and five home games. There is great spirit, great tailgating party, loud support for the students, and the fans are great. This should be an exciting season with 12 local players and 20 transfers though donations have dipped and each away game costs $40,000. Brochures and schedules were distributed to Rotarians with an invitation to join Dixie Spirit with a package including dinner at the Golden Corral and football tickets. Dixie Spirit involves the community in support of DSC students and student athletes. The college representatives also noted the success of other athletic programs including men and women’s basketball with 60 local kids on teams and women’s soccer which team placed 2nd in All American Conference.
Posted by Linda Sappington at 6:43 PM No comments: