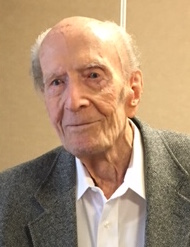 Elvin Martin Anderson, a longtime member of St. George Rotary, passed away on Monday, August 29, 2016 at the age of 104. Andy was born March 5, 1912 in Oasis, Utah to Peter M. and Tora Jensen Anderson; grew up on a farm and graduated from Hinckley High School.  He left the farm behind to move to California where he began his working life doing odd jobs and where he met June Barg on a blind date which lasted for 69 years.

From 1933 to 1946, Andy worked for Standard Oil Company then joined the Marine Corps, serving three three years in the South Pacific. After his service, he and June ran their own gas station in Malibu, CA for seven years. They contemplated retirement at this time, but soon found out there was more month than money so decided to try their hands at real estate.  This new field kept them happily engaged for the next 21years.

Andy and June retired to Oceanside, CA where they spent 13 happy years golfing and enjoying the San Diego area. In 1989, when California began to feel too crowded, they moved to St. George, Utah. They loved St. George and became active in ICL at Dixie College. He also joined the St. George Rotary Club where he found friendship and service opportunities for nearly a decade. They also enjoyed local cultural activities and golfing at the Bloomington Country Club.

June passed several years ago.  Andy is survived by his nieces and nephews throughout the United States.  A service will be held at a later date.

Rest in peace, good friend.
Posted by Linda Sappington at 11:27 AM No comments: 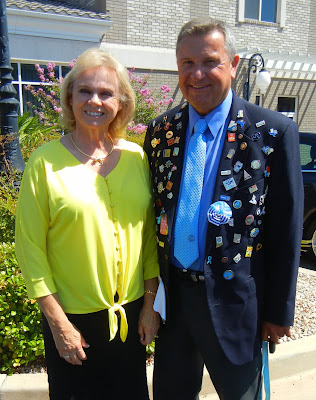 TODAY IN ROTARY was the official annual visit from our District Governor.  DG Uwe Shaun Michel (a member of the South Jordan Rotary Club) shared the story of Jonathon and Charlotte (from Britain’s Got Talent) and reminded members of SGR “the Lord wants to bless your lives and I’m here to help.”  The leader who came from Germany while still a youngster noted, “I’m a business man and I like to make money.  I want to get a good return on my investment.”  He also asked, “since clubs run everything, how do we measure our success?  We have to make ourselves a little uncomfortable in order to truly serve humanity.”

Wife Annette Michel reminded members of SGR, “Rotary is a family affair.  Our first large service project involved all of our kids gathering 6 tons of equipment to equip a small hospital in Guatemala.  We began working on a Hopi Indian reservation several years ago and have two former exchange students we call our own children.”

Referring to RI President Germ as “a Jonathon” DG Shaun reminded St. George Rotarians, “we have to take care of the mother ship (RI).  Utah Rotarians have big hearts, but we can’t work in silos.  We must partner more.”
Posted by Linda Sappington at 1:54 PM No comments: 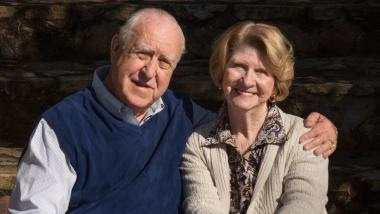 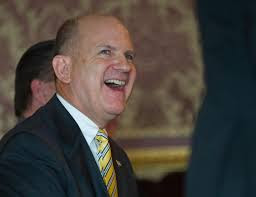 TODAY IN ROTARY David Damshen, Treasurer of the Great State of Utah, asked SGR’s members and guests to support Constitutional Amendment B designed to provide “intergenerational equity” to Utah’s school children by continuing to “grow the land trust program” ($2 billion achieved in 2015) to guarantee quality education into the future.  Changes to the wording of the current statute will be as follows:

According to Damshen, these changes constitute a “consummate no-brainer!”

When asked why we are still bonding for school buildings since this funding is already in place, Damshen noted these funding sources are separate and distinct.

The Treasurer then turned the focus of his presentation to Utah’s unclaimed property, which is $30-40 million annually, of which approximately 27% is claimed by rightful owners due to improvements in imaging technology, “fast track” automation and an efficient call center system.

He noted, too, there is about $9 million in unclaimed property for Washington County residents which funds are “held forever” until claimed.  To search for unclaimed property  in the name of an individual or a business, see www.mycash.utah.gov.
Posted by Linda Sappington at 6:19 AM No comments:

Chief-of-Staff Speaks at All Clubs Luncheon 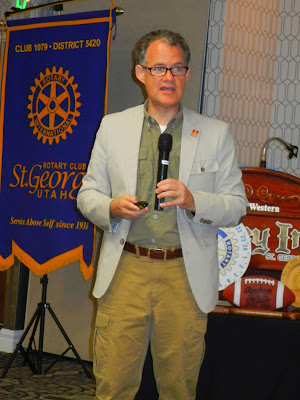 Devin Thorpe, D5420’s chief-of-staff, a Forbes magazine contributor and “a champion for social good,” shared his experiences in helping to eradicate polio in India and Pakistan at an All Clubs Luncheon at the Abbey Inn.  Before Rotarians and several visitors, Devin announced 19 new cases of polio to date in 2016  IN THE WORLD.  “We MAY have already seen the last case of polio EVER,” said Devin, “and an official end to this life-threatening disease which has plagued mankind’s children for generations!”

To finish this project – and any other project in the world - Devin reminded members of SGR, Dixie Sunrise, Red Rock, Zion Canyon and Hurricane Valley Rotary clubs to, “keep shoveling, build momentum and support and create an effective end game stategy.”

“India didn’t believe they could eradicate polio,” Devin said, “but in the long run their belief in their ability to succeed was less important than for them to keep shoveling.”  Around the world there are millions of paid individuals working to eradicate polio in countries like Pakistan, “which in some cases, require as many as 8 vaccine’s before it ‘takes’.”

Rotary has partnered with some really smart people, but Rotary is leading the way!  However, the eradication of this disease has a $1.5 billion price tag, with $35 million coming for the world’s Rotarians … the balance provided by the Bill and Melinda Gates Foundation and world governments.  “Rotary needs a lot of help, so if we share the work, we must also share the credit!”

Although there has been a 99.9% reduction in the number of polio cases in the world, to accomplish “our end game every child on the planet must be immunized in the next 3 years, so we must continue to amass our war chest … and we are already a year behind!”

The key-takeaway from today’s meeting, according to Devin is “if we can end polio … what else can we do?  So, let’s start imagining a world without malaria, poverty, and a world where every child gets a decent education!”
Posted by Linda Sappington at 2:51 PM No comments: 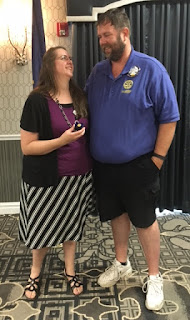 TODAY IN ROTARY, Annaliese Isom was awarded a Paul Harris Fellow by her husband Richard Isom and Greg Zemp received his PHF+5 … amazing and generous support for the Rotary Foundation.

Our own Paul Tikalsky, a scout executive – one of 3800 professional scouters nationwide - for more than 33 years and the father of five Eagle scout recipients, spoke about scouting in the local community noting “Eagle candidates complete approximately $250,000 in projects in the local community and generate about 60,000 pounds of canned goods for the Utah Food Bank.”

As the Field Officer for the Utah National Parks District – the largest council in the USA with more than 40,000 volunteers - Paul has been heavily involved in the construction of the Marion D. Hanks scout camp at Quail Creek with a price tag of $600,000.  With fundraising support and donated labor provided by such Washington County companies and non-profits as SUHBA and Tuacahn, $80,000 in other improvements have made this a 1st class facility.

Other upcoming projects include a capitol campaign for a re-do of the 1700-acre Thunder Ridge Scout Camp with Hyrum Smith heading up the fundraising efforts.

The Beaver High Adventure Camp has less infrastructure but also needs an upgrade.

“The local community often takes scouting for granted,” noted Paul, “but scouting prepares boys for life by teaching them to do tough things!”
Posted by Linda Sappington at 7:25 PM No comments: