SGR Hears of Roads and Streets

Jack Petersen, Sergeant-at-Arms greeted members and visitors to the 3731st meeting of St. George Rotary Club. Ray Robinson lead the SGR Choir in a festive rendition of "I’m Looking Over a 4-Leaf Clover." Lee Warren invited members to follow him in the Pledge of Allegiance. Terance White asked for the blessings of heaven on the meeting and the meal. Don Pendleton took the podium for a high energy Horseplay while Phil Hall collected fines on behalf of the Rotary SK8 Park landscaping project.

President Jeff Morby introduced club members to the Rotary Foundation Future Vision Plan. Gil gave additional input then asked for member support. All were in favor of becoming part of this pilot program.
Jesse Thompson, sponsored by Jim Coleman, was read in as a prospective member. Any comments relating to this proposed new member should be shared with any member of the board.
Kyle Case asked for hosts for a girls softball fast pitch tournament in May. Call Kyle at 674-0550 for more information.
Glade Hamilton, Assistant District Governor (Area 10) visited and extended his thanks and appreciation to members of SGR for their service to the community and encouraged support of the Rotary Foundation.
President Jeff announced the work day for all of club members on Global Youth Service Day (Saturday, April 25) at the SK8 Park. Trees and flowers will be planted and it is hoped the permanent Rotary sign will be placed on or before that day. For more information, contact Linda Sappington at 674-5757. 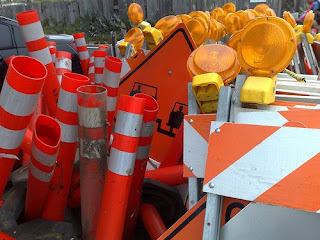 PROGRAM: Jeannine Holt introduced Larry Bulloch, City of St. George Public Works Director who reports, "Work is progressing on the Southern Parkway, designed as a 65 mph, non-stop expressway to the airport. Initially, there will be three interchanges, one on the frontage road, one at River Road and one at the airport access road. When increased traffic requires it, these intersections will be converted to interchanges. Enhanced safety at the Bluff Street intersection and at locations where the City Creek and Pioneer Rim Trails cross Red Hills Parkway will also be a focus of this project. Completion of the environmental assessment (EA) is expected by Spring 2009. Design is expected to be complete by Spring 2010 and construction by Spring 2011.
The Brigham Road Interchange located at MP4 on I-15, is a UDOT facility which has experienced significant congestion problems since it was opened. A recent study identified existing deficiencies and proposed several short and long-term alternatives to mitigate the deficiencies. Improvements at the west roundabout by UDOT will add an auxiliary Wal-Mart by-pass lane, modify the central island and the splitter islands and improve signing and lane markings."
For more information about city roads and airport projects, see "traffic and transportation" at sgcity.org or call Larry at 627-4050.
Posted by Linda Sappington at 5:13 PM No comments:

Bob Bramlage, SGR’s Sergeant-at-Arms was on duty greeting Rotarians and others visitors to the 3730th regular weekly meeting of St. George Rotary. In honor of Presidents’ Day, Ray Robinson lead the SGR Choir in "The Battle Hymn of the Republic." Don Pendleton invited members to follow him in the Pledge of Allegiance and West Martin asked for the blessings of heaven on the meeting and the meal. Ken Sizemore took the reins for Horseplay while Durant McArthur collected fines on behalf of the SK8 Park landscaping project.

PROPOSED NEW MEMBER: Jesse Thompson is proposed as a new member with a classification of Trades. Jim Coleman is his sponsoring member. Comments regarding the proposed new member should be directed to any member of the board. 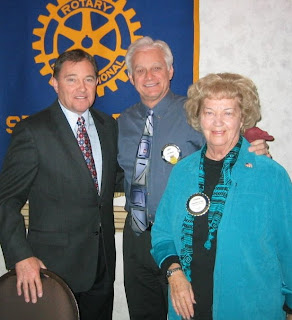 PROGRAM: Jeannine Holt introduced Utah Lt. Governor Gary Herbert, an honorary member of the Provo Rotary Club. Herbert said he is frequently asked what he and the Governor (Jon Huntsman, Jr.) are going to do in their second term in office. "We are going to do what we have done in the first . . . concentrate on economic development! History is a good teacher, so we’re going to look back as we move forward." Quoting statistical trends from It’s Getting Better All the Time, the Lt. Governor noted, "over the past 100 years this nation has made significant advancements in anything we can quantify, and its because freedom - and an entrepreneurial spirit -works!" Herbert, a former Utah County Commissioner stated, "despite the doom and gloom coming out of Washington DC, the situation in Utah is not all bad. We have a fiscally responsible legislature in the best managed state in the nation . . . and the sky isn’t falling, despite Washington County’s 6% unemployment rate - the highest in the state." Looking ahead, Herbert prognosticated there are about 120 companies considering moving to Utah. Tourism is up "and there has never been a better time to buy real estate in St. George." A 4th Congressional seat for the state is not a done deal, but it could happen following the 2010 census. The district would include the western counties of the state from Washington County in the south to West Valley City in the north.
Posted by Linda Sappington at 2:52 PM No comments:

Bob Bramlage, SGR’s Sergeant-at-Arms was on duty greeting Rotarians and others visitors to the 3729th regular weekly meeting of St. George Rotary. In honor of Valentine’s Day, Ray Robinson lead the SGR Choir in "Let Me Call You Sweetheart." Lee Warren invited members to follow him in the Pledge of Allegiance and Dan Strobell asked for the blessings of heaven on the meeting and the meal. Don Pendleton took the reins for Horseplay while Dick Brown collected fines on behalf of the SK8 Park landscaping project. 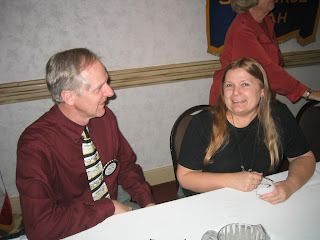 PROGRAM: Cathy Cieczlewicz, Curator of the Sears Art Gallery at Dixie State College, encouraged members of SGR to "buy fine art for your homes. Don’t think you have room? Hang it floor to ceiling . . . called salon style. Rotate it or buy it and donate it back to Dixie State College." George Whitehead, Dean of Fine Arts said, "art protects our culture and helps to 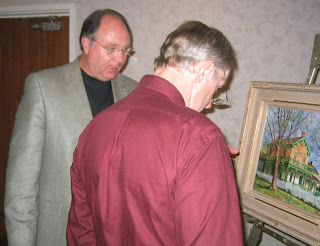 educate our students and our community. Don’t buy a couch painting (art purchased to match the living room furniture) because good art increases in value." Encouraging members to attend the Sears Invitational Art Show, Whitehead said, "it (the Invitational) is a perfect place to begin being a collector because we’ll give you a 35% tax deduction. Art on display ranges from abstract to photo realism by nationally and internationally renowned artists." A gala evening on Friday, February 13 kicks off the two month art show. Entertainment is by Marvin Goldstein. Tickets are $75 each. The Invitational will be open Monday through Saturday from 9 a.m. - 6 p.m. and on Sunday from 2 - 6 p.m.
Posted by Linda Sappington at 7:53 PM No comments:

Jack Petersen, one of SGR’s Sergeants-at-Arms was on duty greeting Rotarians and others visitors to the 3728th regular weekly meeting of St. George Rotary. Ray Robinson lead the SGR Choir in George M. Cohen’s "You’re A Grand Old Flag." Don Pendleton invited members to follow him in the Pledge of Allegiance and Richard Isom asked for the blessings of heaven on the meeting and the meal. Lee Sheets was in great form leading Horseplay while Allen Hilton collected fines on behalf of the SK8 Park landscaping project.

President Jeff Morby announced the death on Saturday of Sara Miller (Mrs. Bob). Funeral services will be held on Wednesday, February 4 at 3 p.m. at the Grace Episcopal Church (1072 E. 900 South).
There was no update on Don Dunham’s condition, but Kerry Hepworth reported how pleased Don and Jan were by the attention of members of SGR who have visited him in the hospital or have sent cards or flowers. 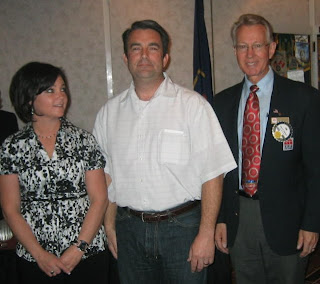 NEW MEMBER INDUCTION: Steve Davis, Chief Operating Officer at Rainbow Sign was inducted as SGR’s newest member, with his wife Lisa and sponsor Jim Coleman at his side.
Congratulations to Jeannine Holt and Drew Heaps for their recent recognition by the St. George Area Chamber of Commerce. 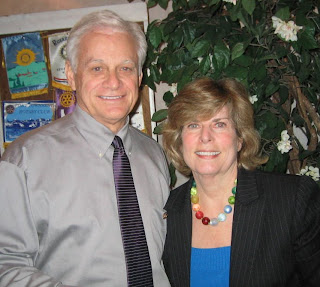 PROGRAM: Denise McCourt, Industry Relations Director for the American Petroleum Industry shared "the Truth About Oil and Gasoline." Addressing the recent announcement of $45 billion in profits in 2008 by Exxon / Mobil, McCourt indicated the oil company is "about in the middle of the pack!" Exxon profits were approximately 9.5¢ of every dollar while Microsoft lead the corporate world with profits amounting to 27.8¢ out of every dollar. "What will the oil companies do with their profits? They’ll put them back into exploration, production and refining," said McCourt. "This country will never be energy independent because 85% of our natural resources are off limits for drilling and exploration on the east and west coastlines and along the Florida coastline in the Gulf of Mexico."
Most of America’s crude comes from Canada and Mexico before it comes out of the Middle East. Out of every dollar paid by consumers at the pump 72¢ represents the cost of crude oil, 17¢ covers the cost of refining and 11¢ is taxes. To ensure future energy security, government policy choices needed include: (1) an increase in energy production by promoting all sources; (2) energy efficiency as an American core principal; (3) investment in advances technologies and longterm energy initiatives; (4) allow market forces to allocate products and adjust to changing conditions; (5) refrain from implementing new taxes which increase the cost of developing domestic supplies; and, (6) support the need to actively participate in global energy markets.
Posted by Linda Sappington at 6:10 PM No comments: