OPENING: Donald Ira Pendleton was at his post as Sergeant-at-Arms meeting and greeting members and visitors to the 3772nd meeting of SGR. Ray Robinson helped members find the right pitch for a rousing rendition of the BYU fight song . . . "When the Saints Go Marching In." Bob Bramlage invited members to follow him in the Pledge of Allegiance and Phil Hall asked for the blessings of heaven on the meeting and the meal. Richard Brown conducted an expedited Horseplay while Nancy Neff collected fines on behalf of Community Education’s Kids Space program.

PROSPECTIVE NEW MEMBERS: President Ken Sizemore read the names of Terri Kane as a prospective member of SGR who he hopes to induct in the next week or two. Other prospective members include Jeff Norton, Andy King, Tiffany Cox and Don Shelline.
Greg Basso asked for support of the Backpacks for Kids project, now in its 6th year with a history of helping 660 kids. His organization needs volunteers to help with all aspects of the project, but he particularly needs someone to serve as a secretary and the vice president.
President Ken noted the date for the Guatemala trip is set for April 23-30. Commitments must be made to Dan Strobell by mid-February.

PROGRAM: Phil Hall introduced his friend and dental professional Scott Bulloch, DDS who shared his affection for and experiences in Haiti. The father of 12 - soon to be 14 children (2 adopted from Guatemala and 2 - about to be 4 - adopted from Haiti), noted the Haitian government is in disarray, education is almost unheard of in some parts of the country and the people have little or no health - or dental care. "There are millions of children who have been orphaned by the earthquake, and many parents are trying to deliver their malnourished and injured children to orphanages in hopes they will get the help they need, because the children in orphanages are the lucky ones!" 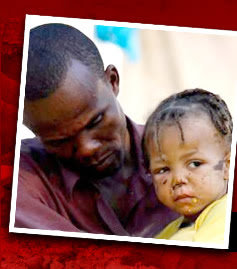 Dr. Bullock, who visits Haiti at least once each year, reports he and those who travel with him, work around the clock for two weeks at a time, "but we feel we are barely scratching the surface of the need (for dental care). Some of the children have never even seen a toothbrush. We work in difficult conditions with no power, no lights with temperatures ranging from 70-90 degrees and 100% humidity." Of the people in Haiti, Dr. Bulloch notes, "most are hardworking, beautiful people, but it is a nation with a corrupt government, no public works and 80-90% unemployment."
According to the dental professional, "what we are trying to do is not always long lasting, but change is happening . . . a little at a time. Health is gradually improving and little by little children are getting some education. Many of the children can read a little, while their parents and grandchildren can’t."

In a plea for support from SGR, Bulloch notes, "Feed the Children (a non-profit relief organization which delivers food, medicine, clothing and other necessities to children and families in need throughout the world, has made a commitment to provide food to the children, if there is a facility where they can eat and utensils." The cost for utensils in the village where Dr. Bulloch works would be approximately $2000. The board will consider whether SGR can make such a commitment.
Posted by Linda Sappington at 8:10 PM

OPENING: Donald Ira Pendleton was at his post as Sergeant-at-Arms meeting and greeting members and visitors to the 3771st meeting of SGR. Ray Robinson led members in a cheerful rendition of "I’m Looking Over A 4-Leafed Clover" on a dreary, rainy Monday afternoon. Jeff Eggertz invited members to follow him in the Pledge of Allegiance and Terance White asked for the blessings of heaven on the meeting and the meal. Richard Isom conducted Horseplay while Kyle Case collected fines on behalf of Community Education’s Kids Space program. 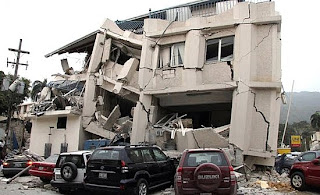 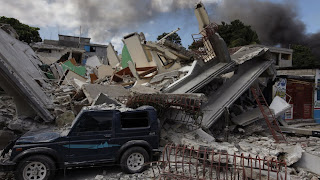 PROGRAM: On this Martin Luther King holiday, President Ken felt it appropriate to discuss ways in which members of SGR could assist in the recovery effort in Haiti following a 7.0 magnitude earthquake on Tuesday, January 12. Government officials in the impoverished nation estimate as many as 200,000 are dead and millions more injured. The strongest quake to hit Haiti in more than 200 years, also crumbled government buildings, hospitals, schools and shantytowns. Most of the capital city of Port-au-Prince is in ruins.
In response to the overwhelming magnitude of the Haitian disaster, RI has established the Haiti Earthquake Relief Fund, a donor advised fund within The Rotary Foundation, for Rotarians who want to donate toward recovery efforts. 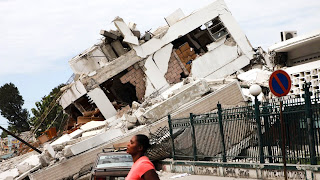 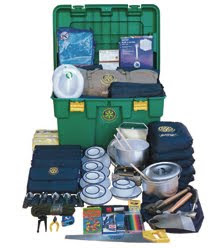 The box itself is lightweight and waterproof and has been used for a variety of purposes in the past - from water and food storage containers to a cot for a newborn baby. A key piece in every box is either a wood burning or multi-fuel stove - capable of burning anything from diesel to old paint as well as boiling water and cooking food. In addition, there are pans, utensils, bowls, mugs and water storage containers.
June McAfee suggested a voluntary $100 assessment to members of SGR for the purchase of Shelter Boxes or other supplies desperately needed in Haiti. Members will hear more about how they can help at next week’s meeting when, coincidentally - Dr. Scott Bulloch will speak on his international service project in Haiti.
Posted by Linda Sappington at 3:32 PM No comments: 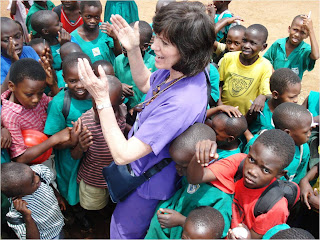 OPENING: Donald Ira Pendleton was at his post as Sergeant-at-Arms meeting and greeting members and visitors to the 3770th meeting of SGR. Ray Robinson helped members struggle through a shaky rendition of the "Battle Hymn of the Republic." Andy Anderson invited members to follow him in the Pledge of Allegiance and Dan Strobell asked for the blessings of heaven on the meeting and the meal. Richard Brown dazzled members in his "first ever" Horseplay while Phil Hall collected the fines on behalf of Community Education’s Kids Space program. 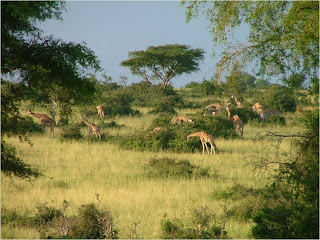 PROGRAM: Linda Baker introduced Drew Cahoon, a retired dentist and visiting Rotarian from the Raymond, Alberta Rotary Club who spoke on the "Power of a Dream and a Commitment" project to bring much needed dental care to the people of Uganda. He joined Rotary after a near fatal accident and got involved immediately in a project to collect books for the African country. "20,000 books later, I was hooked and began researching the country’s other needs," noted Cahoon. What he found was shocking - to himself and to everyone who heard his story! There are currently only 156 dentists practicing in a country of 27 million people. 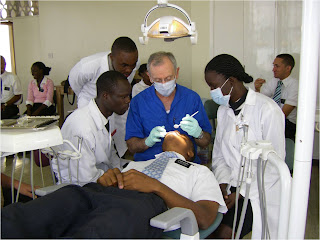 Through the Rotary 3H program (Health, Hunger and Humanity), Cahoon was able to begin the process of finding additional financial support as well as dentists and other technicians willing to help him in his efforts. Through such organizations as Rotary International, the LDS Church, DentAid and others, the Rotarian and others were able to raise nearly $500,000 to replace equipment and enhance the services provided by the Makawere University Dental School - including 20 new chairs and state-of-the-art x-ray equipment. Cahoon also noted he has made a commitment to travel three times a year for a period of three weeks each visit to Uganda and extends an invitation to any Rotarians to come along. For more information, Drew Cahoon can be reached at dgcahoon@gmail.com.
Posted by Linda Sappington at 2:50 AM No comments:

OPENING: Donald Ira Pendleton was steadfast in his role as Sergeant-at-Arms meeting and greetings members and visitors to the 3769th meeting of SGR. Ray Robinson was in fine form as he led the SGR Choir in a couple of verses of "America." Terance White invited members to follow him in the Pledge of Allegiance and Nick Lang asked for the blessings of heaven on the meeting and the meal. Jeff Morby conducted an energetic Horseplay while Linda Baker collected the "filthy lucre" on behalf of Community Education’s Kids Space program which provides academic hope and help to approximately 160 children in after school programs at Red Mountain, Sunset, Coral Cliffs and East Elementary Schools.

ANNOUNCEMENTS: Jeff Morby, chairman and members of the Nominating Committee distributed ballots for election of officers. Phil Hall was named President Elect (Nominee) to serve in 2012-13. West Martin and Jenny McDowell were elected to two positions on the SGR board and Linda Sappington will serve another year as club secretary.
PROGRAM: Classification talks were given by Nancy Neff and Linda Baker. Nancy, born in Independence, Missouri, grew up as a member of the Reorganized LDS Church where her father served as a member of the Quorum of Twelve Apostles. From age 11-15, Nancy and her family lived in Japan where her father worked to grow the membership of his church. Her family’s international experiences also took them to Italy, the UK, France and Nashville (which she describes as another foreign country). Nancy has a BS in recreation and a Master’s in health. In her spare time, she has always enjoyed hiking, biking and spelunkering. During her 25 years in Salt Lake City, Nancy worked for Intermountain Health Care’s community health centers and for the state Public Health Department where she had responsibility for the "Healthy Utah" program. Currently, she is the executive director of the St. George Community Health Center. 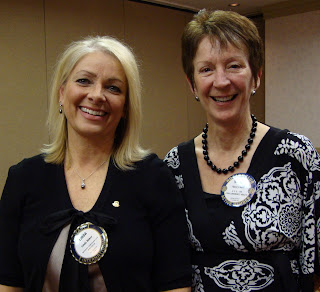 Linda Baker grew up in Centerville, Utah but came to St. George 14 years ago to open the southern Utah office of Workers Compensation Fund, where she was encouraged by her supervisor to "join the Rotary club." Today she is a Paul Harris Fellow and the current President-elect (Nominee). Linda has four grown children and two grandchildren. She has worked for WCF for 36 years (joking that she started her employment at age 10). At the company’s new offices on Dixie Drive, Linda oversees the work of 13 employees who manage effective loss control programs and proactive claims services.
Posted by Linda Sappington at 8:13 PM No comments: