Waste Not, Want Not!

OPENING: Terance White, the new Club Service chair, tried his hand at Sargeant-at-Arms duties including taking attendance and meeting and greeting Rotarians and guests to the 3746th meeting of St. George Rotary while SA’s Bob Bramlage and Jack Petersen looked on and applauded his efforts. Ray Robinson lead the SGR choir in an usually solemn version of "My Country, Tis of Thee." Don Pendleton, finally back among his Rotary friends after open heart surgery, lead the Pledge of Allegiance. Eldon McArthur asked for the blessings of heaven on the meeting and the meal. Greg Basso lead a spirited Horseplay with Shar Heitkotter collecting fines on behalf of the Guatemalan stove project.
ANNOUNCEMENTS: President Jeff Morby announced that Ken Sizemore, president-elect and Gil Trujillo, District Governor-elect are winging their way to Birmingham, England for the Rotary International Convention on June 22-24.

PROGRAM: Lindsey Hirst, a student at Dixie State College who oversees the KidSpace after-school program shared information about her program which sees an average of 30 boys and girls at five school sites around the county. From 3:30 - 5:30 p.m. each day, students get help with math, reading and other homework and do crafts at Coral Cliffs, Red Mountain, Riverside and Sunset Elementary schools. 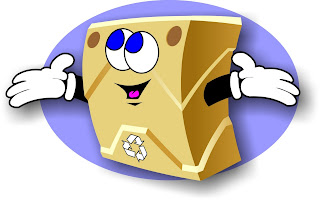 Jennifer Harris, recycling coordinator for Washington County Solid Waste shared information on the first recycling initiative in the history of southern Utah. Part of the "Don’t Waste Dixie" program, recycling paper, plastics, metal and glass is designed to reduce the county’s 122 million pounds of landfilled materials - an average of 2700 pounds per household - while raising funds for special community programs such as parks and recreation and Hurricane’s Peach Days. Harris reminded Rotarians of the difference between garbage and trash. Garbage is a term for food waste, while trash is a term for all other unwanted items - and is actually a resource which can be recycled and reused. The WCSW has already recycled over a million pounds of trash and raised more than $15,000 in the process. The receptacles - called Binnies - are located at numerous highly visible and easily accessible sites around the county. "We have a good start on getting local residents to recycle. There are many people who have an emotional connection to the process or who have come from other communities where recycling is ‘the norm’," states Harris. "But there are those who think it’s a lot of effort for nothing. We still have lots of work to do to convince everyone of the value of recycling to our community and its future."
Posted by Linda Sappington at 4:47 PM No comments:

Conserving our Most Fixed, Finite and Fickle Resource

OPENING: Jack Petersen assumed responsibilities as SGR’s Sergeant-at-Arms greeting Rotarians and other visitors to the 3745th regular weekly meeting of St. George Rotary. Ray Robinson lead the SGR Choir in "I’m Looking Over A 4-Leafed Clover" accompanied by Marva Condie. Dan McArthur invited members to follow him in the Pledge of Allegiance and Bob Bramlage asked for the blessings of heaven on the meeting and the meal. Shar Heitkotter conducted an energetic Horseplay with fines collected by Mark Peterson on behalf of the Guatemalan stove project.

PROGRAM: Julie Breckenridge, conservation coordinator for the Washington County Water Conservancy District, reminded those in attendance that water is "fixed, finite and fickle . . . fixed because we have the same amount today as we had thousands of years ago . . . finite because as the population increases each person gets a smaller portion . . . and fickle because you never know when you will get more and how much it will be." With the increased frequency, length and severity of droughts and high population growth in the area, water has become even less predictable and a challenge to manage efficiently. Water conservation, defined as activities which reduce the demand, improve efficiency of its use and reduce loss and waste, is vital in meeting these challenges sine individual small savings can add up to large savings. Although water conservation does not eliminate the need for future water projects based on population growth projections, it is crucial in meeting current demands. For more information on ways to save water in everyday usage or to schedule a soils test, call Julie Breckenridge at 673-3617.
Posted by Linda Sappington at 6:10 PM No comments:

Is There Enough Evidence?

At the recent Utah Rotary District Conference in Park City, RI Representative Bill Sturgeon (Phoenix, Arizona) asked, "If you were arrested on charges of being a good Rotarian . . . would there be enough evidence to convict you? What is a Rotarian?

A Rotarian is a person who . . .
* Digs wells from which he will never drink,
* Vaccinates children he will never meet,
* Restores eyesight to those he will never see,
* Builds houses he will never live in,
* Plants trees he will never sit under,
* Feeds hungry people regardless of race or politics or religion,
* And makes crawlers into walkers, halfway around the world.
A Rotarian is a person who knows real happiness, as Albert Einstein said, "Can only be found by helping others."
Learn more about what transforms a Rotary member into a Rotarian by attending the Utah District Conference in St. George, May 13-15, 2010 (see www.utahrotaryconference.blogspot.com for more information).
Posted by Linda Sappington at 9:27 PM No comments:

"And That's What I Call Bowling the Jack"

OPENING: Jack Petersen served as SGR’s Sergeant-at-Arms greeting Rotarians and others visitors to the 3744th regular weekly meeting of St. George Rotary. Ray Robinson lead the SGR Choir in "In the Good Old Summertime." Andy Anderson invited members to follow him in the Pledge of Allegiance and Dan Strobell asked for the blessings of heaven on the meeting and the meal and Grant Carter lead members in a recitation of the 4-Way Test. Gil Trujillo conducted an energetic Horseplay with fines collected on behalf of the Guatemalan stove project, by Jack Petersen.

ANNOUNCEMENTS: President Jeff shared his enthusiasm for the recent Utah Rotary District Conference and encouraged support of the 2010 conference in St. George. Linda Sappington will chair the event which will include a golf tournament, a service project, great presenters and a "Rotary’s Got Talent" show. Watch on the special blog created to promote the conference at http://www.utahrotaryconference.blogspot.com/ which will have a post every Thursday morning about some aspect of the conference.

President Jeff asked for an update on members Don Pendleton, Don Dunham and Dean Terry, whose wife Carol fell and broke her arm.

Board members are reminded of the Tuesday, June 9 meeting at Ken Sizemore’s office beginning at 7:15 a.m.

Greg Basso announced the most recent count of wheelchairs donated and distributed to date is 756,407, thanks to the efforts of Rotarians around the world.

DRGE Gil Trujillo reported on the symbolic "passing of the torch" at the conference in Park City noting he now proudly wears the DRG pin worn originally by Richard L. Evans (who went on to serve as RI President in 1966-67), and passed on to other Utah district governors including Eldon McArthur, Doug Quayle, Sterling Spafford and Jim Coleman. According to Governor Gil, "SGR has more PDG’s than any other Utah club!" 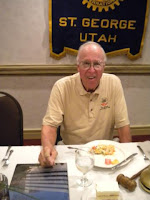 PROGRAM: Grant Carter introduced Dr. Wayne Pace, an enthusiastic advocate of the sport of lawnbowling who is working with St. George City Leisure Services to find the necessary resources - including funding in the amount of $450,000 - to create a bowling green! 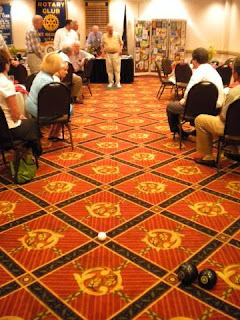 According to Dr. Pace, lawnbowling is a sport with a goal to roll slightly asymmetric balls, called bowls, closest to a smaller—normally white—bowl called the "jack". Lawnbowling is usually played outdoors on a large, rectangular, precisely leveled and manicured grass or synthetic surface which is divided into parallel playing strips called rinks (an indoor variation on carpet is also played). In singles competition, one of two opponents flip a coin to see who wins the "mat" and begins a segment of the competition (in bowling parlance, an "end"), by placing the mat and rolling the jack to the other end of the green to serve as a target. Once it has come to rest, the jack is aligned to the center of the rink and the players take turns to roll their bowls from the mat towards the jack and thereby build up the "head". A player in a singles game reaches a specified target number of shots (usually 21 or 25). A team (pair, triple or four) has the higher score after a specified number of ends. Because of its competitiveness, skill and because it is a non-contact sport, the game suits people from teen years through to their nineties.
Posted by Linda Sappington at 6:14 PM No comments: