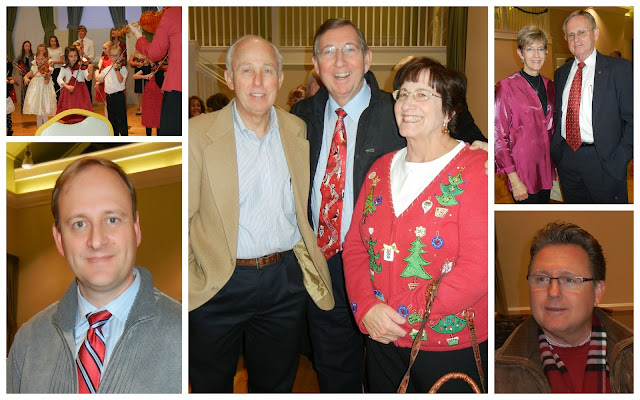 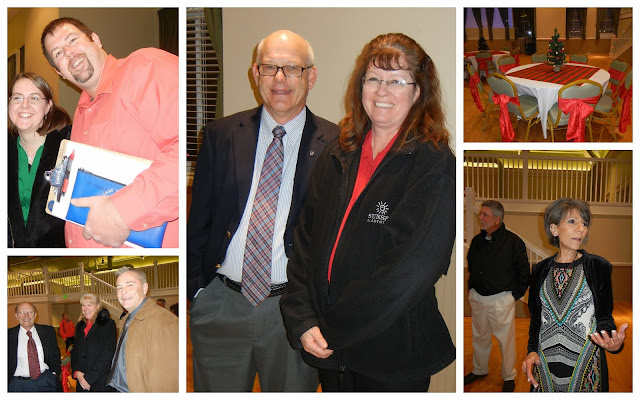 SGR’s traditional Christmas party was held on Thursday evening, December 5 on the 3rd floor of the St. George Art Center.  Approximately 60 were in attendance and all enjoyed delicious food, lively conversation and outstanding entertainment provided by the Dixie Strings.  A silent auction, organized by Linda Baker, raised about $800 to be used for SGR projects.  Thanks to Cindy Loeber, who chaired the event and all those who contributed their time to set-up and clean-up, and donated items to be auctioned for fundraising.  Merry Christmas, one and all!!!

Posted by Linda Sappington at 8:39 PM No comments:

Tree Planting is Service Above Self 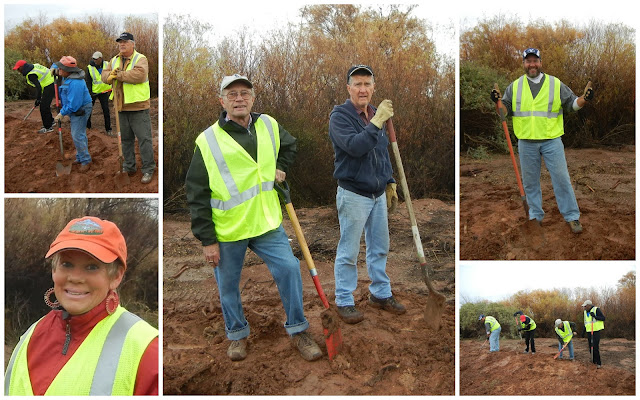 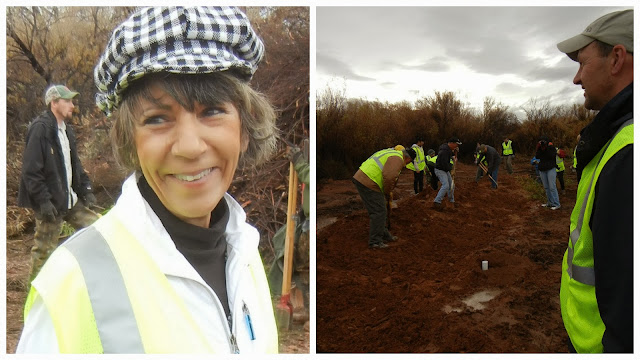 Members of the St. George Rotary Club went above and beyond in their efforts to provide “service above self” on a cold, rainy Saturday, November 23.   Along with several employees from the City of St. George’s parks and recreation department, SGR along with friends and family members gathered along the banks of the Virgin River for a tree planting service project – although what we planted could not technically be called “trees” – they were more like sticks in the mud!  City employees got the jump on us and had the project nearly completed by the time everyone arrived, but there was happy comradry and the reward at the end of our 20 minutes of service was another delicious outdoor breakfast prepared by our own Chef Gil Trujillo!

Why plant this particular kind of tree?  Club president Durant McArthur shares his knowledge of the southwestern willow flycatcher ((Empidonax traillii extimus), an endangered songbird which makes its home along riparian (stream) areas.  Empidonax is Latin for “mosquito king;”  It was declared an endangered species in by the US Fish and Wildlife Service in 1995. It prefers forested areas around rivers and streams. The species is associated with cottonwood, willow, box-elder, tamarisk, Russian olive, water birch, and alder.  Our tree planting is to provide nesting and cover habitat for this endangered species.  The southwestern willow flycatchers build nests made of shredded bark, cattail tufts, and grasses, usually in the fork of a willow growing near water. The eggs, which are buff-colored and dark on one end, are laid from early June through early July. The average breeding pair will produce about four eggs in four days. The southwestern willow flycatcher is imperiled by fires, water projects, livestock grazing, global warming, brown cowbird parasitism, and replacement of native habitats by introduced plant species. It migrates to tropical areas for the winter.

So SGR now has a service history including club, community, youth, international … and birds!  Thanks to all who came out to support the project … and thanks to Sheldon Banks for organizing it.

Posted by Linda Sappington at 6:49 PM No comments: