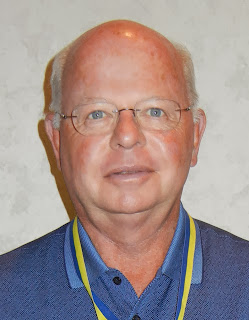 Meet Tom Cover … husband, father of three, former Marine, retired banker, avid golfer and a Rotarian for more than 30 years!  He served in the Marine Corps 1961-1966,  including the Marine Corps Reserve.  As a banker, he started his career at First National Bank of Omaha where he worked for 10 years, then moved to Montana where he worked for Security Banks of Montana and Wyoming .  After ten years he became the CEO of Hawkeye Bank of Council Bluffs ,Iowa.  Seven years later the bank was sold to U. S. Bank and he then became CEO of Packers Bank in Omaha, Nebraska.  Another sale happened three years later  – to Wells Fargo – resulting in a move to Minnesota and a new assignment as CEO of Marquette  Bank.  When that bank also sold to Wells Fargo, he and his wife Carole moved to St . George where he worked 3 years for Wells Fargo, then consulted until 2009 when he hung up his pinstriped suit and green visor for golf, parties, travel … and whatever!  Tom still has a LLC Bank Consulting firm but would rather be golfing, participating in the Marine Corps League, the American Legion and helping in the creation of the SunRiver Veterans Honor Park.  When asked to share any interesting / serious of funny experiences in his life with his fellow Rotarians, the graduate of the University of Nebraska at Omaha replied, “Not in print!”  Can’t wait to hear his Classification Talk!
Posted by Linda Sappington at 9:08 PM No comments: