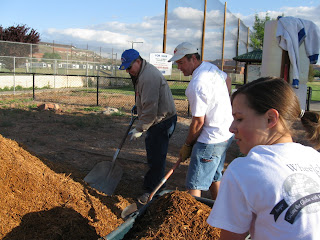 Rotarians Lee Sheets, Kurt Johnson, Allen Hilton, Nick Lang, Linda Sappington and Ray Robinson gave up a portion of their Saturday to join forces with members of the Rotaract Club at Dixie State College, AmeriCorps members Angie, Sheena and Billie, members of the Youth Volunteer Corps of Washington County and nine Rotary foreign exchange students on April 25 to spread 15 cubic feet of redwood mulch at the entrance to the Rotary SK8 Park. 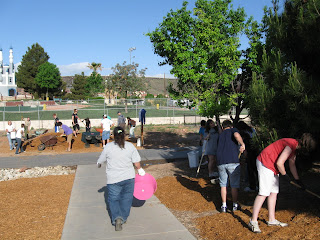 The event was a little late for Earth Day (Wed, April 22), but perfectly timed to kick off National Volunteer Week (April 27 - May 3) and to celebrate Global Youth Service Day (Saturday, April 25), a day set aside in 1993 to recognize the contribution of youth volunteers to meeting the needs of every community! Mother Nature cooperated, delivering a cooler-than-usual late April day for the first of many service projects planned at the 2-acre, city owned and managed SK8 Park. Mark your calendar and watch for more service opportunities on National Make-A-Difference Day (Saturday, October 24) and National Family Volunteering Day (Saturday, November 21).
Posted by Linda Sappington at 5:53 PM No comments: 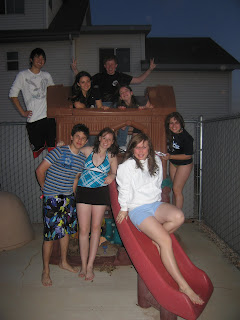 They came from all over Utah . . . and from all over the world . . . to enjoy Ken Seefeld’s hamburgers, Dan and Cindy Strobell’s amazing backyard and meet and greet members of St. George Rotary Club.

Stefan Brackmann, a Rotary exchange student from Germany, and Maria Piemonte from Brazil, have lived this year in Sandy. Miriam Ringström, of Sweden, has experienced life in Kaysville. Watchara Anupansawang of Thailand has lived this year and attended school in Springville. Lais Maksoud Cabral traded life in Brazil for a school year in Orem while Carmen Leoni traveled from Italy to go to school in Taylorsville. 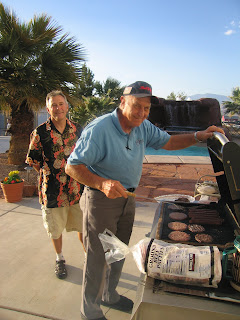 Felipe Goncalves from Brazil has been a student this year in Holladay and Armadine Michels came all the way from Belgium to shovel snow in Logan. Laurie Simkins and Isaac Puriri, who both studied abroad last year in Italy and Germany joined members of St. George, Murray and Salt Lake City Rotary clubs for this pleasant summer evening!
Rotary youth exchange students must be between the ages of 15 and 18.5 years old when school starts and attending high school with average or above average grades. Exchange students may be, but are not required to be, the children of a Rotary club member.
Posted by Linda Sappington at 8:32 PM 1 comment:

Jack Petersen, one of SGR’s Sergeant-at-Arms was on duty greeting Rotarians and others visitors to the 3739th regular weekly meeting of St. George Rotary. Ray Robinson lead the SGR Choir and members of Dixie State College’s Show Choir in an interesting rendition of verses 1 and 4 of "America." Jeannine Holt invited members to follow her in the Pledge of Allegiance and Gary Benson asked for the blessings of heaven on the meeting and the meal. A 1099 was called in place of Horseplay and Jack Petersen collected $5 on all members on behalf of the Guatemalan stove project. 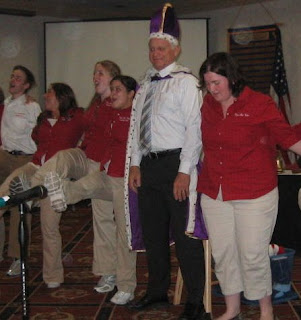 ANNOUNCEMENTS: President Jeff Morby expressed his appreciation - and that of the club - to Reed Noble for his outstanding efforts as chairman of the 11th Annual 4-Way Test Essay Contest.
President Jeff announced Kerry Hepworth had submitted her letter of resignation from the board. A member to assume her duties on the board will be announced soon.
President Jeff reminded members of upcoming events including the barbeque at Dan and Cindy Strobell’s home on Thursday, April 23 at 6:30 p.m. in honor of the Rotary Youth Exchange Students; the Southern District Assembly at the Crystal Inn in Cedar City on Saturday, April 25; and the Utah District Conference in Park City during the period of May 21-23. President Jeff also reminded members of the SK8 Park service project on Saturday, April 25. 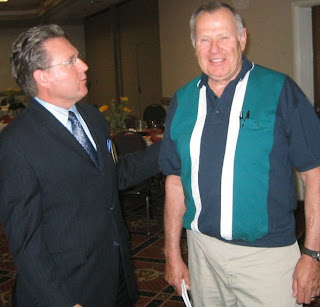 PROGRAM: Stephen Nadauld introduced the "new, revitalized, but part of the past" Dixie Show Choir who performed a high energy set of three show tunes. Jeff Morby represented the club well with a few high kicks and an assortment of head gear while members toes were tapping to the rhythm of dance and song.
Rick Schofield introduced his long time friend and author Lynn Miller who has just released "Healing My Fractured Spirit" telling the personal story of his life from the time he was orphaned at age 3 after his mother succumbed to tuberculosis. Miller was among 400 in an orphanage where the boys were repeatedly told they would not amount to anything and all would likely end up "hopeless, homeless or incarcerated." Defying all odds, Miller was the only boy to attend college and went on to have a successful career with Upjohn where he was singled out for his successes - after only five years on the job - from among 22,000 employees! "Obstacles and hardships do not always mean failure," noted the former Rotarian who will share the proceeds from his book with the DOVE Center, Dixie Care and Share, New Frontiers and those providing support for the Lost Boys. For more on Lynn Miller’s remarkable life, see http://www.healingmyfracturedspirit.blogspot.com/ on the internet.
Posted by Linda Sappington at 6:05 PM No comments:

Bob Bramlage, SGR’s Sergeant-at-Arms was on duty greeting Rotarians and others visitors to the 3738th regular weekly meeting of St. George Rotary. Ray Robinson lead the SGR Choir in an enthusiastic rendition of "I’m Looking Over a Four-leafed Clover." Andy Anderson invited members to follow him in the Pledge of Allegiance and Byron McLeese asked for the blessings of heaven on the meeting and the meal. Reed Noble lead Horseplay while West Martin collected fines on behalf of the Guatemalan stove project.

ANNOUNCEMENTS: Board members were reminded of the meeting on Tuesday, April 14 in the office of the Association of Governments.
Gary Benson asked 15 Rotarians to help organize the Cotton Days Parade in Washington City on Saturday, May 9.
Dan Strobell announced receipt of the $5000 matching grant from Rotary International to go with $10,000 from SGR . . . which has now been matched in total by the makers of the stoves, bringing the total donation for the purchase of 200 stoves to $30,000!!!
Nancy Neff announced the grand opening of a school based community health clinic at Millcreek High School on May 12 from 11:30 a.m. - 1 p.m. This newest health clinic is through a partnership between Intermountain Health Care, Washington County School District and the Community Health Center. 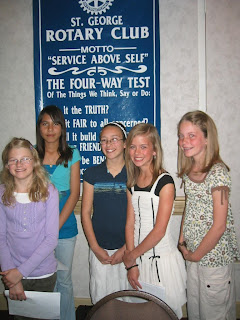 PROGRAM: Reed Noble introduced the five winners of SGR’s 11th annual Four-Way Test Essay Contest and invited them to share their essays. Ashley Allen, a student at Fossil Ridge Elementary School shared the touching story of adoption of herself and a younger sister by a loving family after being in foster homes - and having the experience of having an adoption "fall through" - until she was five years old. Tracie Wyson, daughter of Dan and Launa Wyson and a student at Lava Ridge Intermediate School, spoke of her 18-year-old neighbor’s example of service, friendship, truth and fairness. Cassandra Carreon, a student at Lava Ridge Intermediate School told of her love for a father who taught her the principles of honesty, fairness, goodwill and kindness. Rachell Bingham, a student at Enterprise Elementary School, shared stories of a grandfather who has "a cool backyard and a Model A where grandchildren get to ride in the rumble seat waving an American flag!" She said her grandpa is so much fun. "He ties baby blankets and hangs up pinata’s for the grandchildren when they visit!" Danielle Hess, also of Enterprise Elementary School, spoke of her "super mom" who goes out of her way to help her children, her neighbors and her family while always practicing the principles of fairness, friendship and honesty. Each winning student received a check in the amount of $50 and each of their schools received a check in the amount of $200.
Posted by Linda Sappington at 7:52 PM No comments:

Bob Bramlage, SGR’s Sergeant-at-Arms was on duty greeting Rotarians and others visitors to the 3737th regular weekly meeting of St. George Rotary. Ray Robinson lead the SGR Choir in an enthusiastic rendition of "You’re A Grand Old Flag." Richard Isom invited members to follow him in the Pledge of Allegiance and Gary Benson asked for the blessings of heaven on the meeting and the meal. Jack Petersen lead Horseplay while Richard Brown collected fines on behalf of the Guatemalan stove project.

ANNOUNCEMENTS: Jeff Morby read a letter of resignation from Lee Warren, citing age-related health problems as the basis for his decision. Ken Seefeld reported on Don Dunham’s health noting Don had been out to church and was still hopeful of being able to return to full activity in SGR.

Ron Haun, DSC’s head football coach, shared his enthusiasm for his players and his hope for a successful season. The spring season will be kicked off with a scrimmage on Saturday, April 11 from 11 a.m. - 1 p.m. Haun announced his team will be made up of 11 local players and 26 recruited from around the country. "We are anxious to develop a viable booster club and support from the community through strong season ticket sales."

Ken Sizemore reminded members of SGR of the New Member Orientation on Thursday, April 9 at 6:30 p.m. 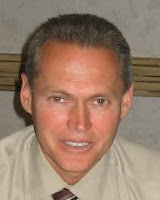 PROGRAM: Guest speaker Ron Truman spoke on the subject of personal injury law. According to the local attorney, there is a high probability of at least one member of SGR being seriously injured in an automobile accident in 2009. In 2006, St. George had 1772 personal injury accidents compared to 56,887 in the state of Utah - including 287 deaths. "No matter how careful you are, there is no way to plan for who’s in the vehicle behind us or beside us - including those talking on cell phones or impaired due to drugs or alcohol." The population most likely to be involved in a personal injury accident are those age 16-24. Road rage accounts for approximately 32% of accidents and speed is a factor in nearly every accident.

What should you do when you are involved in an accident? "Exchange information, call for police assistance, render injury assistance, take photos (even with a cell phone camera), and keep a personal journal chronicling how you feel from day-to-day during the recovery period. It is also important to review automobile insurance from time to time and consider adding "uninsured" or "underinsured coverage" to your policy.

A graduate of the J. Reuben Clark Law School at BYU, Truman practiced law in Chicago, Los Angeles, and Las Vegas - representing such major players as Motorola and Hughes Aircraft in personal injury cases - before returning to his St. George hometown in 1994 where he practices law and occasionally judges small claims cases.
Posted by Linda Sappington at 4:22 PM No comments:

(Honorary) Rotarian Dr. Durrant McArthur is one of three most recently inducted of Dixie State College’s 72 Hall-of-Famers! Just as he and his wife Virginia were packing to leave for Portland, Oregon on a 1-year mission for the Church of Jesus Christ of Latter-day Saints, the son of Rotarian Eldon and brother to Rotarians Dan and Sam McArthur, was honored for a 30-year career in research with the U. S. Forest Service. For more than three decades the Dixie College alum has focused his efforts on understanding biological resources in the semi-arid desert region of the western United States. His research has been documented in approximately 430 publications, more than any other Forest Service scientist.
Posted by Linda Sappington at 3:56 PM 1 comment: