Rotary in the Canyon of the Gods 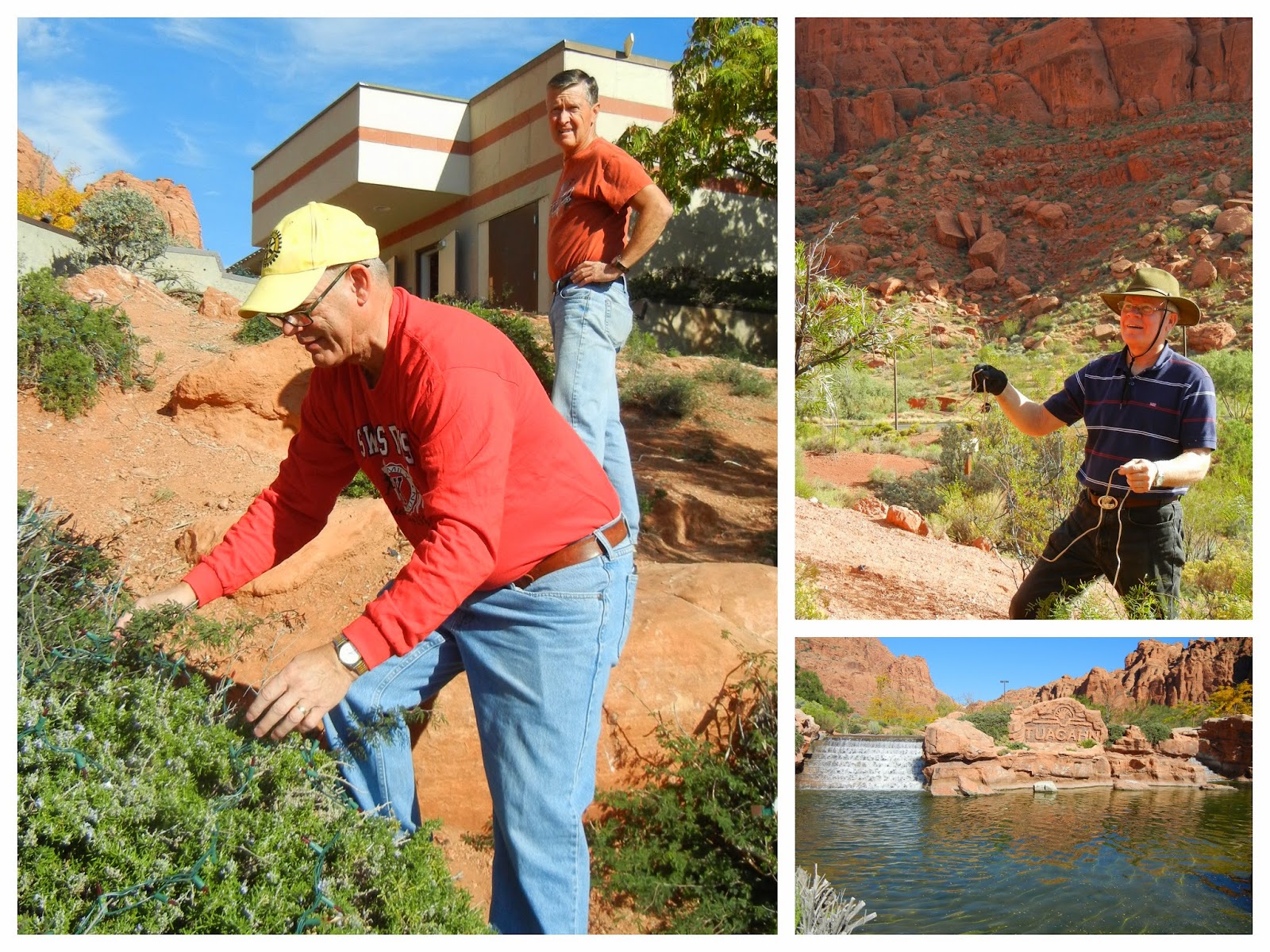 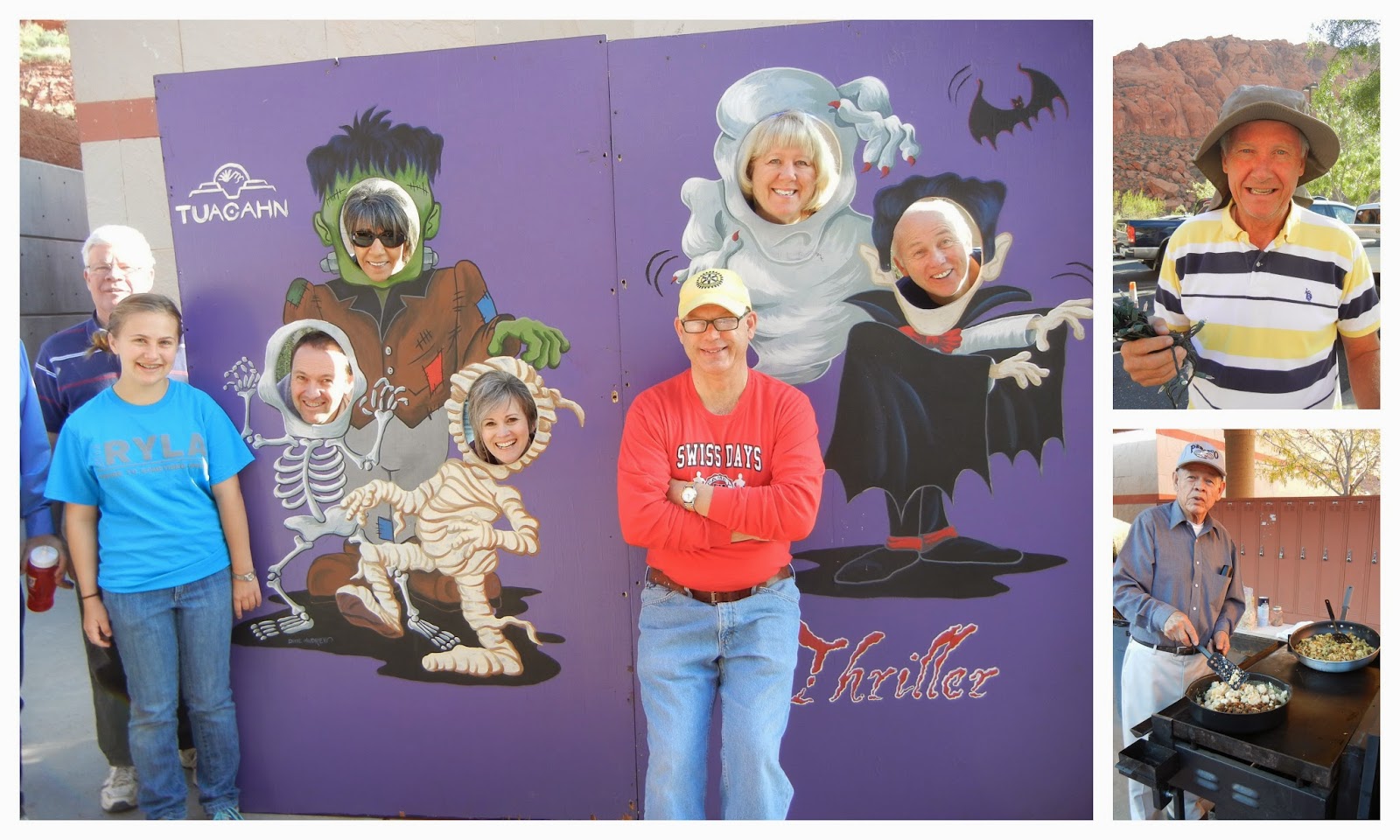 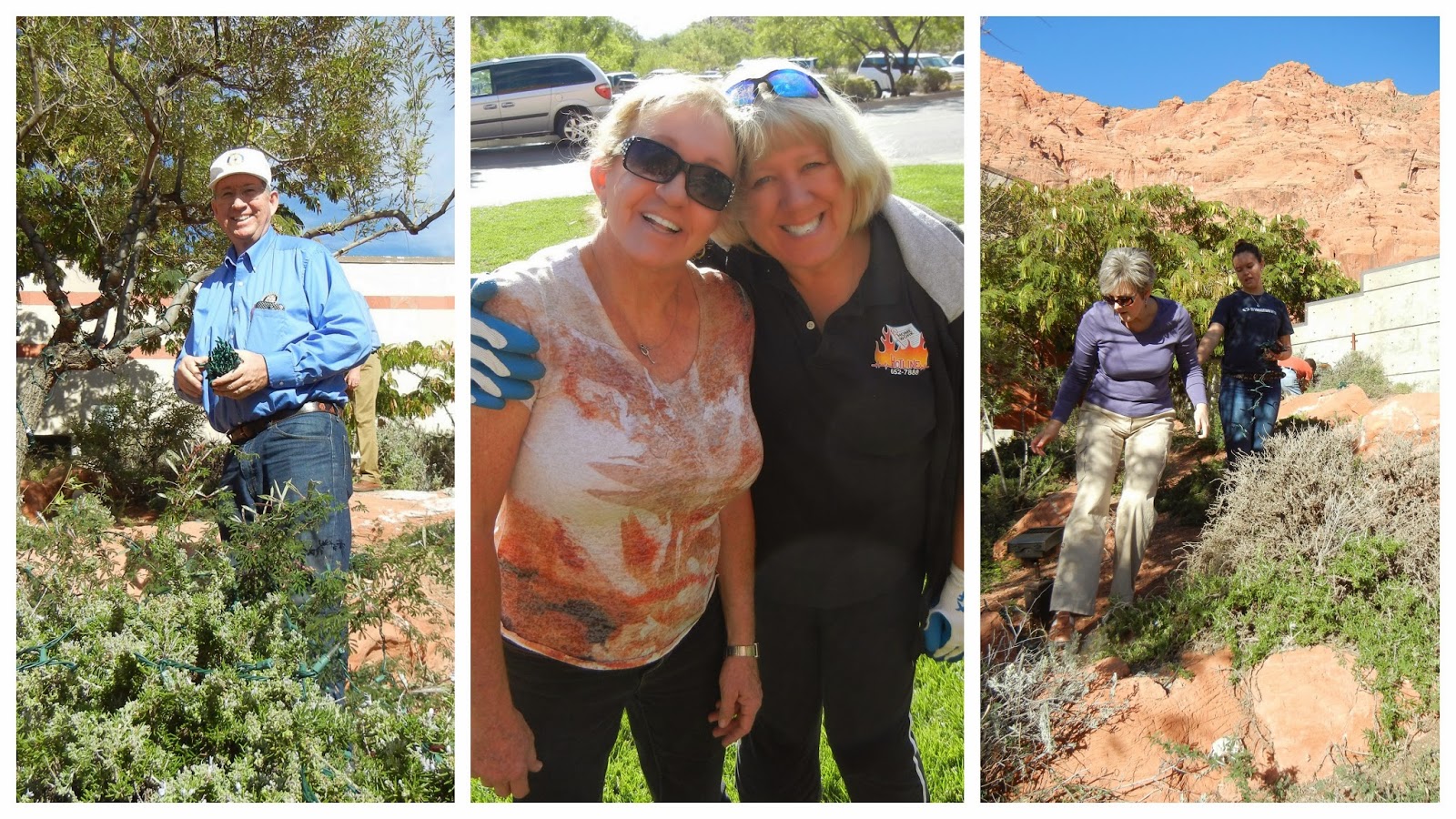 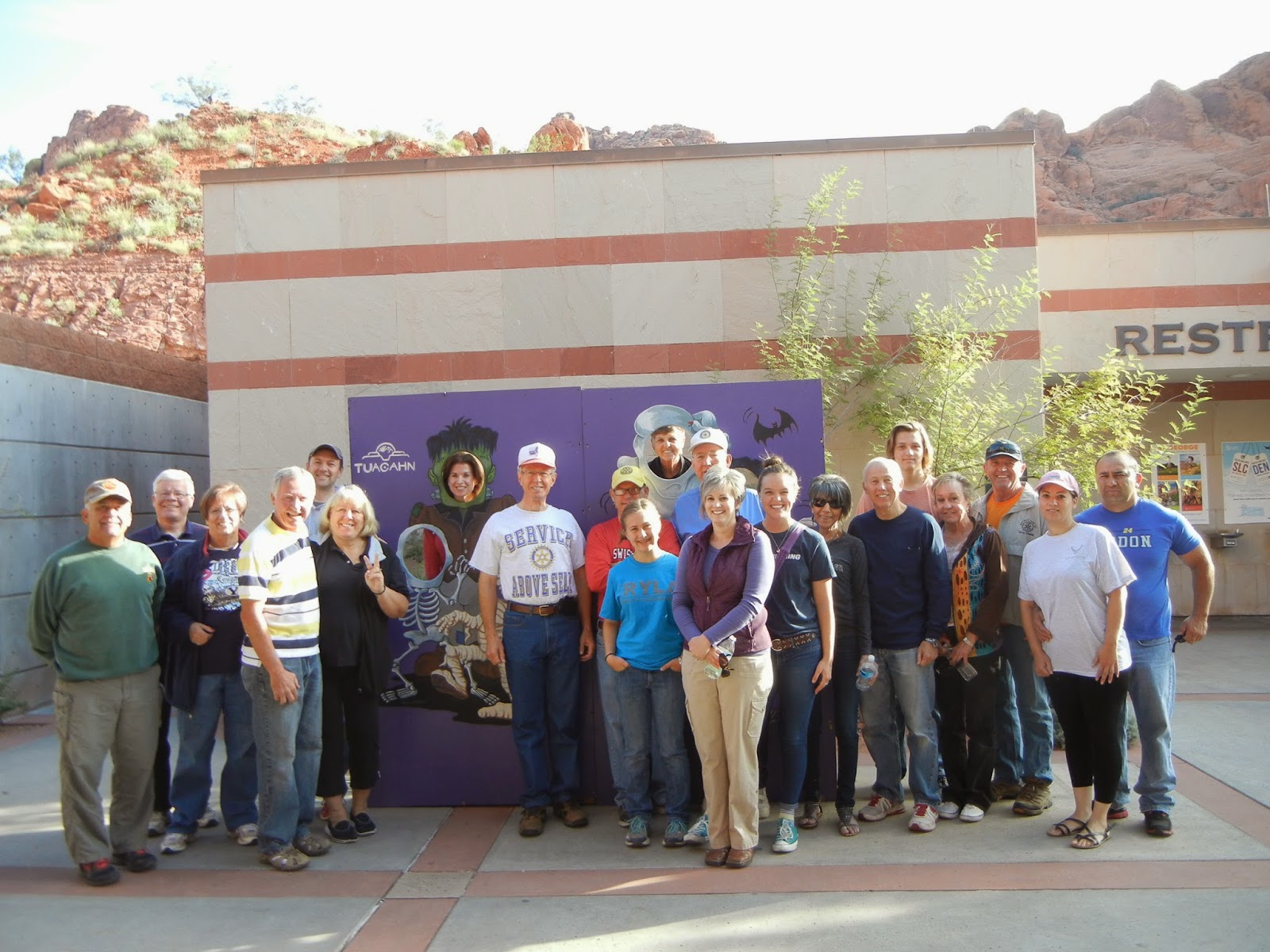 On a spectacular October 25th morning – aka “Worldwide Rotary Day” – 13  Rotarians from SGR and another 4 from DSR along with 8 family members and friends and 2 RYLA youth gathered in the red rock splendor of Tuacahn.  Together we enjoyed famously delicious breakfast burritos and a couple of hours of service stringing Christmas lights in anticipation of the holiday season in the “Canyon of the Gods.” (the lights will go on following Thanksgiving on Friday, November 28). Special thanks to Tuacahn’s two Kevins – CEO Kevin Smith and groundsman Kevin Lounsbury; Gil Trujjillo for making sure there was plenty of good food for hungry workers; former Rotarian Don Pendleton and his BIL Wayne Harris for bringing out the cooking gear; and, all 27 willing volunteers who took time from other responsibilities to join in this “service above self” project.


Posted by Linda Sappington at 8:38 PM No comments: 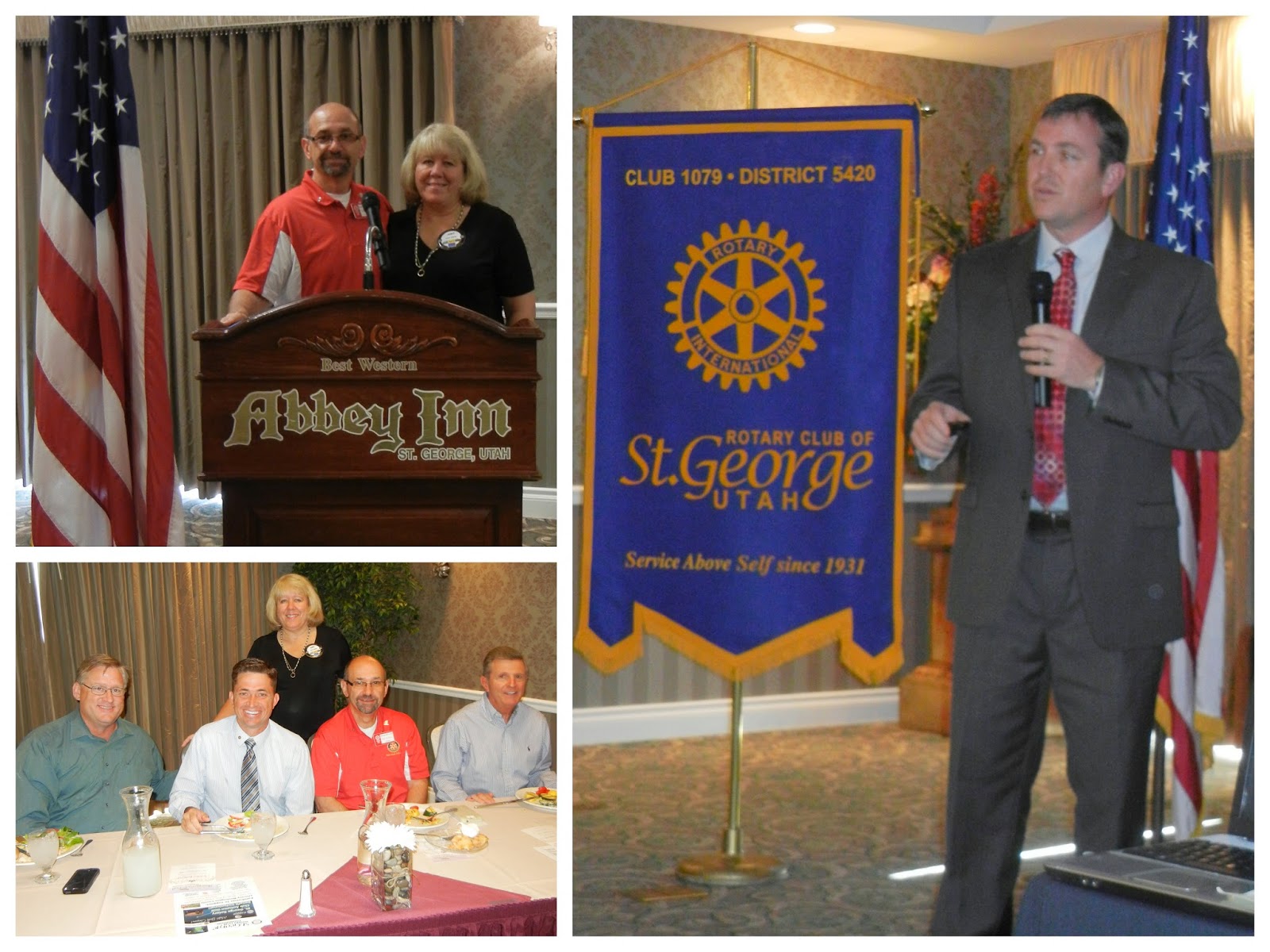 In Area 15’s first All Clubs Day this year, members of SGR, Dixie Sunrise, Red Rock, Hurricane Valley and Zion Canyon Rotary Clubs gathered to network and socialize and to hear from Dr. Richard (“Biff”) Williams, who will be inaugurated as the 18th President of Dixie State University on October 23.   Egor Shulman, president of Red Rock Rotary presented a check in the amount of $500 for the Guatemala stove project expressing his wish, “all the members of our club could travel there with you.”

On his continuing “listening tour” since taking the helm, President Williams followed a spirited Horseplay with Rick Schofield at the podium.  Born and reared in Brigham City, Biff and his family return to the Beehive State after many years pursuing a Bachelor’s Degree in Lifestyle Management at Ricks College, a Masters in Athletic Training from Weber State University and a PhD. In Athletic Training Curriculum and Instruction from New Mexico State University.  For several years, he served as Provost (“no one really knows what that means,” he quipped during his presentation, “but it sounds important.”) at Indiana State University where there was “a strong emphasis on community engagement for hands-on experiences.”  Why did he decide to apply for the position in Southern Utah?  “My in-laws live here so you know how it is … ‘happy wife, happy life.’”  He also recognized what he describes as a huge potential for the future of DSU and “it was a great fit for me!”

As DSU grows, “we are in a position to chart our course .. and we’ve got to get it (the strategic planning process) right.  Students will come and go, but the community's vision for the university lasts forever.”

According to the new president, “enrollment is on the rise, but is limited by a serious need for more student housing.” Plans for the future of the university include construction of a 350-bed dormitory, a second story addition of 75 offices at the Burns Arena, and a human performance center.  A University / Town Task Force to create the “Best University Town in America” is being organized with a focus on technology, health care and human performance, “but we must be creative in our expansion, including offering the best in online education.”

As he and his family have been learning about DSU, he noted multiple times saying, “who knew” about the programs already functioning on campus.  The President and DSU's outstanding faculty and staff look forward to adding to what his predecessors have put in place and creating stronger community partnerships because “WE” are Dixie!
Posted by Linda Sappington at 7:18 AM No comments: 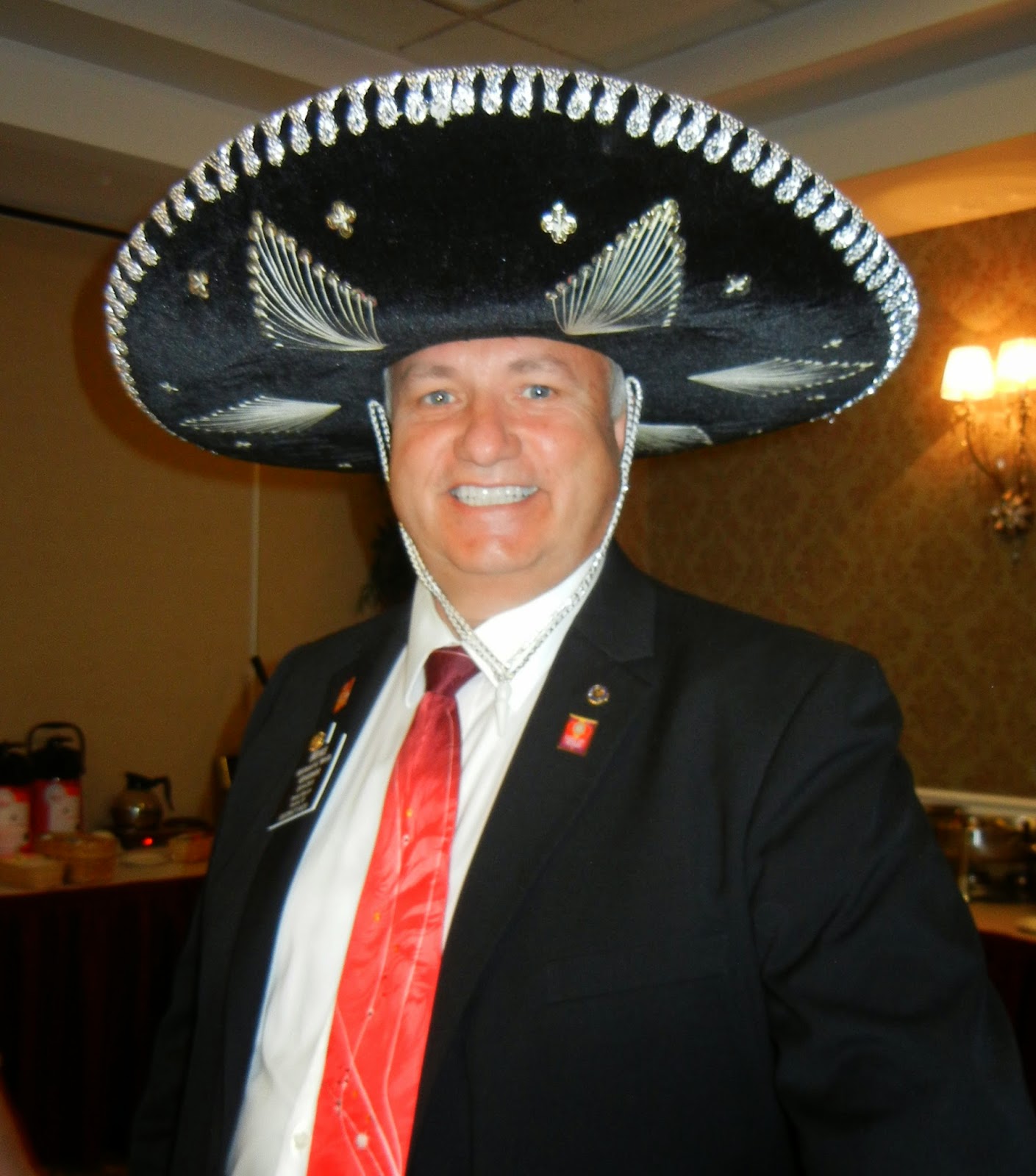 2014-15 District Governor Mike Wells and his wife Karlene (Tooele Rotary Club) shared their enthusiasm for Rotary and for RI President Gary Huang's theme for 2014-15 of “Light up Rotary” at the regular weekly meeting of SGR on Monday, October 13.  DG Mike spoke of his love of youth - and of Rotary's excellent youth programs and told of his experiences taking more than 200 youth to build houses in Mexico.

He spoke of the importance of staying on course with RI’s goal to eradicate polio from the earth by 2018.  Currently, only 3 countries in the world had any new cases in the past twelve months:  Nigeria (6 new cases), Afghanistan (5 new cases) and Pakistan (nearly 100 new cases).  In short, “we are this close,” he reminded members.

He invited members to attend any and all “conferences, institutes and conventions” to develop a deeper understanding of Rotary and how this organization is changing the world. 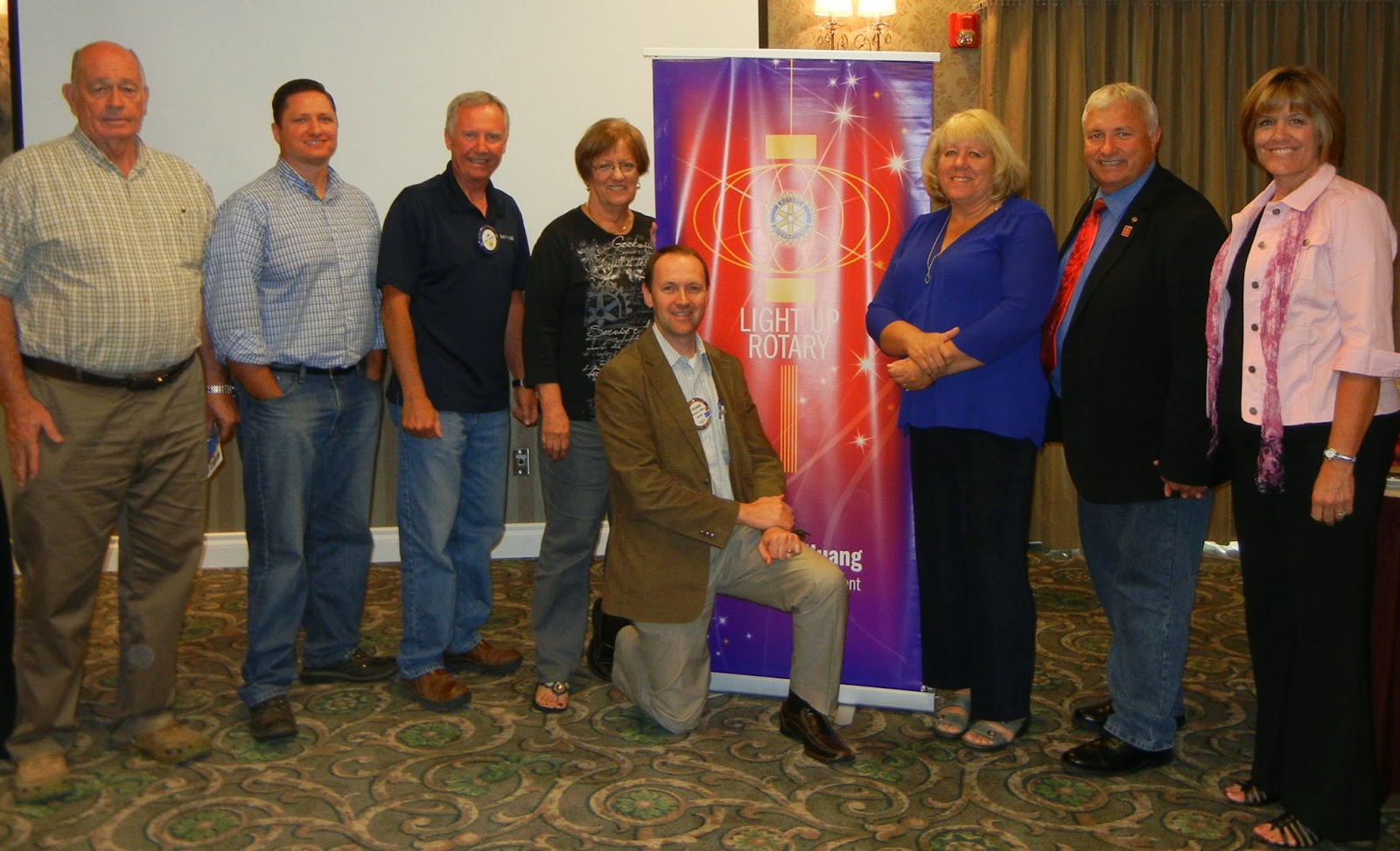 Finally, he encouraged everyone to attend the District 5420 conference in Mexico during the week of June 8-15. “We will work on about 60 projects each day until noon … then play all afternoon until it is time to fiesta each evening,” he said of the plans for this exciting event to help the people of Puerto Penasco.  More information - or to register for the conference - can be found on the website at www.districtfiesta2015.com.  Don’t miss this opportunity to make a difference thru Rotary!

Posted by Linda Sappington at 2:14 PM No comments: 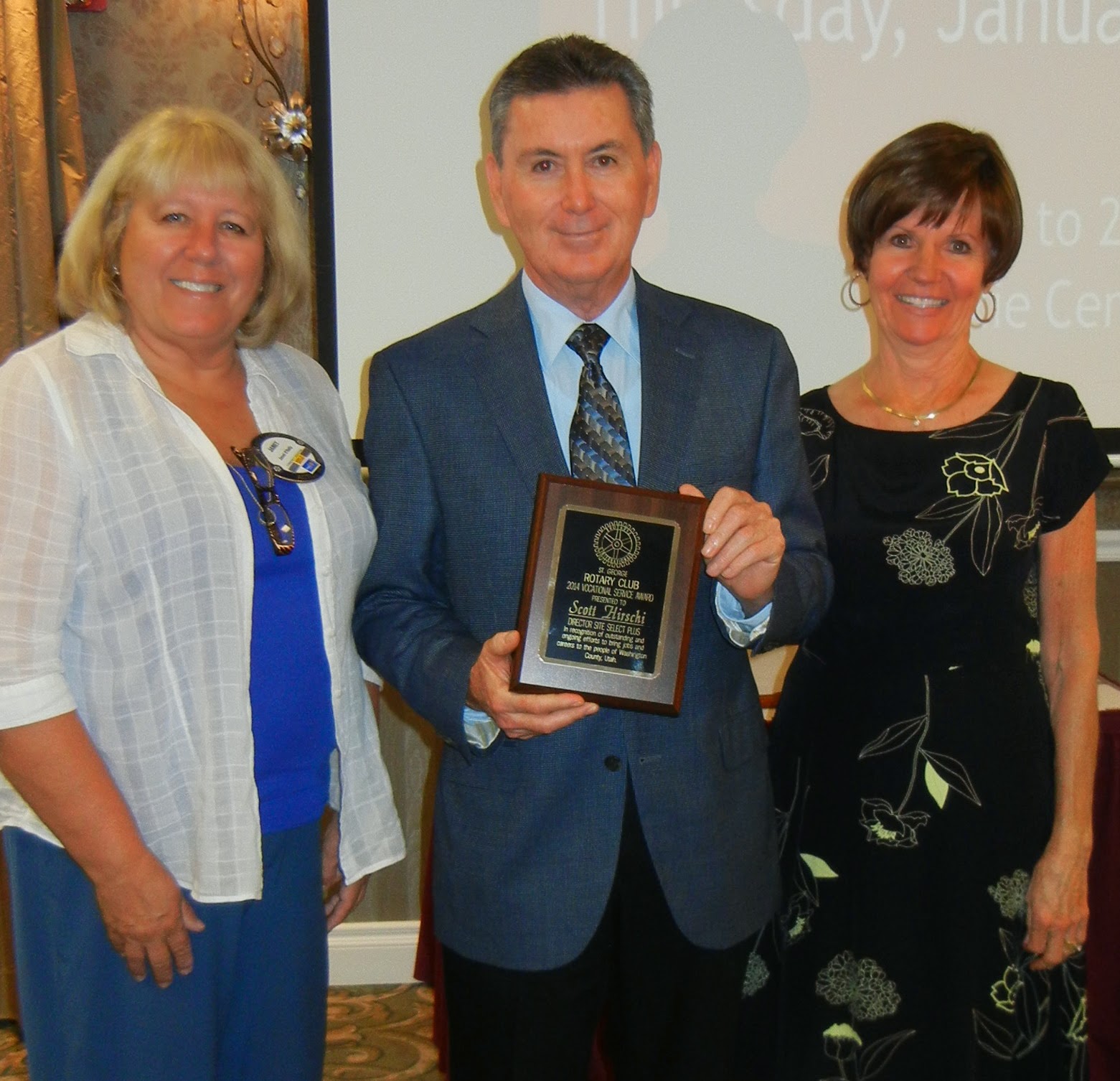 TODAY IN ROTARY Scott Hirschi, Executive Director of Site Select Plus, updated members and guests of SGR on the status of Washington County’s economic development.  Noting SGR is “the premiere civic club in the county due to its quality of membership,” he graciously accepted the club’s 2014 Vocational Service Award for his efforts to bring jobs and careers to the citizens of the Washington County.

His presentation then shifted to a “shameless promotion” of What’s Up Down South, upcoming on January 15, 2015 at the Dixie Center.  Scheduled presenters include Utah Lt. Governor Spencer Cox, U. S. Olympic Gold Medalist in Skeleton Noelle Pikus-Pace  and breakout sessions including the business of import/export, residential real estate, social media and marketing. 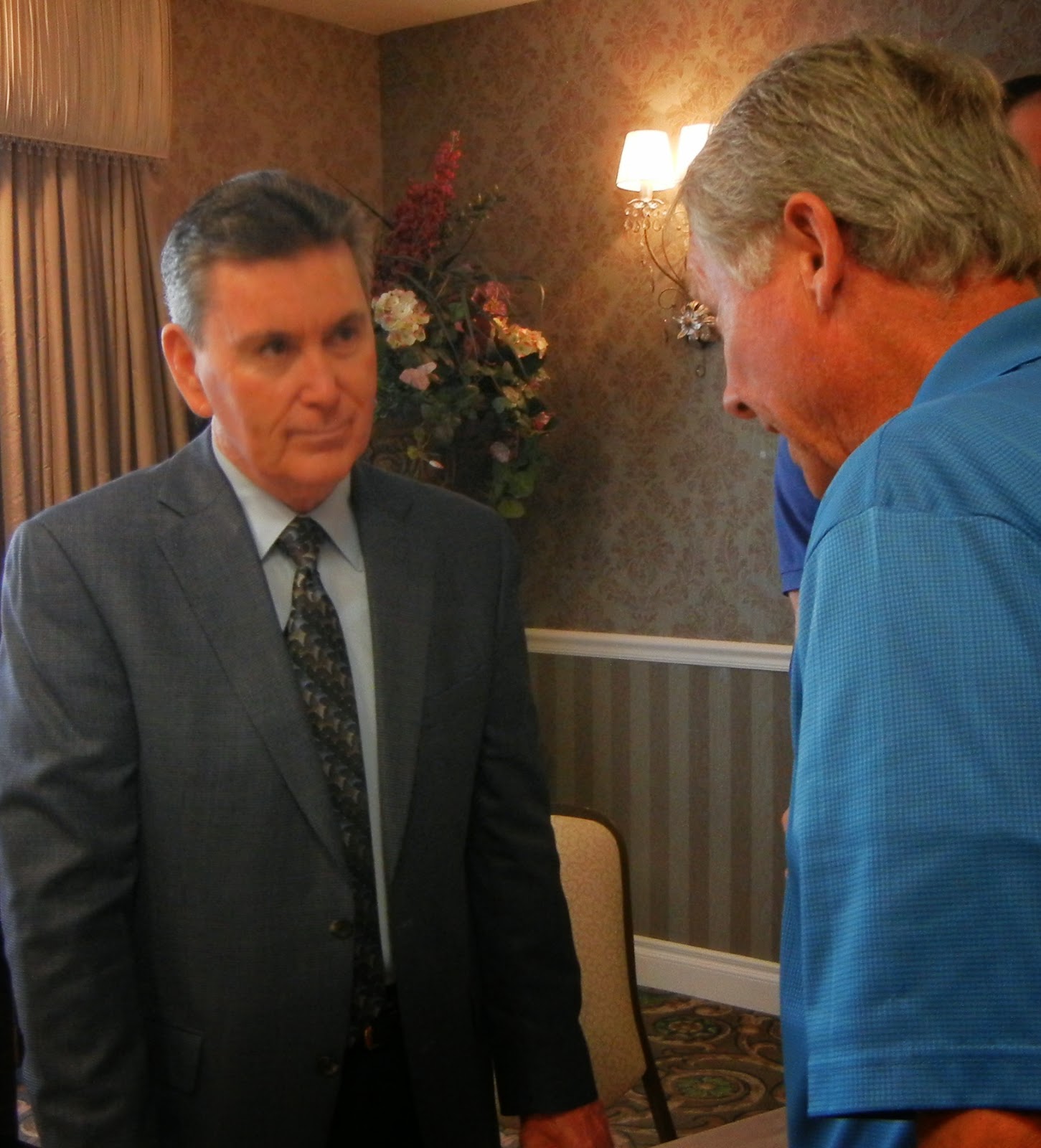 He noted “the first economic development project in the county was the Cottonmill.”  In modern times, a sleeping bag company provided over 100 jobs at a time when Washington County was struggling to keep its young people employed here.  He spoke of the importance of having healthy value-added manufacturing companies here (“those which manufacture products here which are purchased elsewhere”) such as Virocon and the Walmart Distribution Center – at one time the largest building in the state of Utah.  He also stated the importance of diversity in the marketplace which strengthens economic health.  “Washington County is decidedly diverse with no dominant industry in a community which has consistently maintained a 6% growth rate for the past 45 years … and is expected to have 650,000 residents by the year 2060."

“There is lots of interest in Washington County by businesses looking at us.  There are also lots of businesses we will be announcing soon.”  When asked about the loss of such businesses as Blue Bunny, he noted, “our diverse economy will help us address those step backs, but our future is very, very encouraging.  Family Dollar is still hiring and expects to reach 400 employees soon.  Viracon is back ‘with a vengeance’ and the Industrial Brush Company has 22 employees (they brought with them) who are making 175% of the average wage in our community.  All of that is good for all of us!”

Posted by Linda Sappington at 12:06 PM No comments: