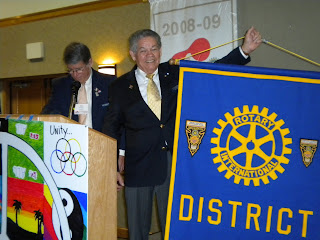 Outside it was grey and overcast, but inside at the Yarrow Hotel in Park City, members of St. George Rotary Club, including Gil Trujillo, Ray Robinson, Ken Sizemore, Linda Baker, Linda Sappington, Jim Coleman and Allen Hilton found the Utah Rotary District Conference filled with high energy enthusiasm in the form of music and song, great speakers and lots of new ideas on strengthening Rotary throughout the state of Utah! 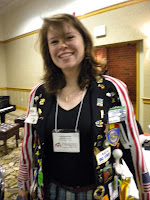 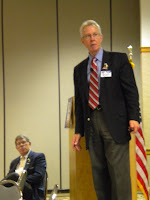 RYLA attendees from all over Utah, updates from Rotary program chair people and new ideas about the programs of the Rotary Foundation; building membership from PDG Jim Coleman; building literacy programs from PDG Wally Brown; and a tearful "farewell" from current District Governor Tom Powell. The nearly 200 Rotarians in attendance also heard a "state of Rotary" report from RI representative Bill Sturgeon from Phoenix, Arizona. There were also frequent references to next year's Utah Rotary District Conference, May 13-15 in St. George. 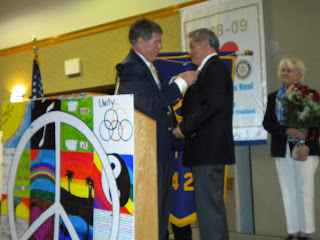 The purpose of the district conference is to advance the Object of Rotary through fellowship, inspirational addresses, and the discussion of matters of importance to Rotary clubs and Rotary International. The conference showcases Rotary programs and successful district and club activities. Many Rotarians have said that they were never truly enthusiastic about Rotary until they saw an inspirational presentation on Youth Exchange, Group Study Exchange, or Ambassadorial Scholarships at a district conference. Conferences all over the world are celebrations to inspire Rotarians and an opportunity for them to enjoy fellowship.
Mark your calendars and plan to attend next years conference. Watch for ongoing information about the 2010 Utah Rotary District Conference at http://www.utahrotaryconference.blogspot.com/ where there will be a new posting every Thursday until May 13!!!
Posted by Linda Sappington at 8:08 AM No comments:

OPENING: Bob Bramlage admirably served as SGR’s Sergeant-at-Arms greeting Rotarians and others visitors to the 3743rd regular weekly meeting of St. George Rotary. Ray Robinson lead the SGR Choir in "America, the Beautiful." Dan Strobell invited members to follow him in the Pledge of Allegiance and Nick Lang asked for the blessings of heaven on the meeting and the meal. Allen Hilton conducted an energetic Horseplay with fines collected by Richard Brown on behalf of the Guatemalan stove project.

PROGRAM: Allen Hilton, chair of the International Service committee had the honor of introducing the members of the Group Study Exchange from Sao Paulo, Brazil. GSE team leader is Humberto Mariano, an economist by profession and a member of the Rotary Club Sao Paulo - Sao Miguel Paulista since the fall of 1990. He currently works as the manager of Sales Contract Management at Voith Paper which provides equipment and services to pulp and paper producers throughout the world. 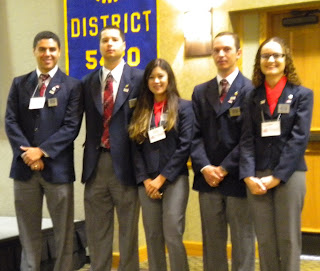 Other team members who shared information about their profession and their country included (from left) Renato Maximiano who practices law with a specialty in public law. He currently works in the law department of Ache Laboratorios Farmaceuticos. Allen Okuma is a graduate of the Academy of Military Police. He is currently a second lieutenant and head of the fire station in Ciudad de Mogi das Cruz. He also has a Bachelor of Law degree and is now studying at the College of Civil Engineering. Sayuri Masukawa teaches English and Portugese at the state public high school in Sao Paulo. She has a degree in languages in secondary education. Marcio Antonio de Assis is the nursing supervisor at Luzia de Pinho Melo Hospital, a public hospital in Ciudad de Mogi das Cruzes. Camila de Almeida, a graduate in Public Relations, currently works as marketing coordinator at Natura Cosmetics, Brazil's largest cosmetics manufacturer.
The Rotary Foundation’s Group Study Exchange (GSE) program is a unique cultural and vocational exchange opportunity for business people and professionals between the ages of 25 and 40 who are in the early stages of their careers. The program provides travel grants for teams to exchange visits in paired areas of different countries. For four to six weeks, team members experience the host country's culture and institutions, observe how their vocations are practiced abroad, develop personal and professional relationships, and exchange ideas.
Posted by Linda Sappington at 11:50 AM No comments:

Getting to "Know Yer Ro"

OPENING: Steve Davis substituted as SGR’s Sergeant-at-Arms, in the absence of Bob Bramlage and Jack Petersen, greeting Rotarians and others visitors to the 3741st regular weekly meeting of St. George Rotary. Ray Robinson lead the SGR Choir in "America, the Beautiful." Terance White Holt invited members to follow him in the Pledge of Allegiance and Nick Lang asked for the blessings of heaven on the meeting and the meal. Mark Armstrong conducted an energetic Horseplay with fines collected on behalf of the Guatemalan stove project, by Richard Brown.

ANNOUNCEMENTS: President Jeff announced Kerry Hepworth’s term on the board would be filled by Terance White. Beginning on July 1, Phil Hall will step into Linda Baker’s position on the board as she assumes responsibilities as the President-nominee. Ken Seefeld has accepted the position of treasurer with Kris Neal serving as assistant treasurer when Mark Armstrong completes his term of service.

Gary Benson solicited support in organizing the Cotton Days Parade in Washington City on Saturday, May 9. Volunteers should be at the start of the parade no later than 7:30 a.m.

Jim Coleman called for an assessment of $100 on each member who does not bring a prospective member to a club meeting in the next 3 weeks. President Jeff enthusiastically supports a membership push based on the loss of nearly 20 members this year. 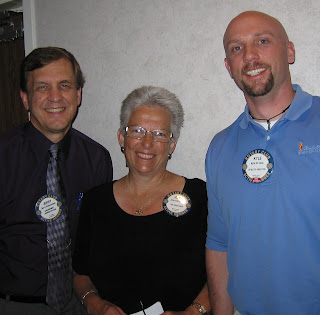 PROGRAM: President Jeff introduced Jerry Rasmussen, Jenny McDowell and Kyle Case (see photo left to right), speakers asked to introduce themselves as part of a "Know Yer Ro" program. Jerry Rasmussen indicated he has been a member for more than five years, sponsored by Ray Robinson. Jerry and all his siblings were born in Salt Lake City, unusual since his father’s work required the family to move from community to community and from one coast to another. Jerry indicated he attended 11 schools before high school and he still has friends all over the U. S. After high school, he joined the Air Force, serving in Vietnam at the end of the skirmish (‘71-‘72) where he served as a ground-to-air controller working with the Air Force testing smart bombs in their early days of development. He is a graduate of Weber State University. He and his wife Donna purchased a restaurant where they worked "24/7 until we realized our children knew their babysitter better than they knew their parents." He later owned the nation’s 3rd largest Allied Moving and Storage company, specializing in electronics and trade shows, with operations in Salt Lake City, Denver and Las Vegas. He and Donna currently both work for Washington County, where he serves as the budget officer.

As a child, Genevieve McDowell was nicknamed "Billy Blue" because her mother was a hillbilly from the Ozarks and her father was a university educated "blue blood." In other words "I’m a mutt who turned out decent!" states Jenny, who has a bachelor’s and a master’s degree in performing arts from the University of Southern California. After graduation, she took her talents to the New York Opera Company where she learned stage directing along with performing. In 1974, she applied for and was awarded a Rotary International Graduate Fellowship for one year of study at the Academy of Music in Vienna, then taught fulltime on the faculty of California State Polytechnic University. Jenny has traveled to Croatia and Bosnia nine times in the past decade and feels "lucky to be in America." In addition to her musical career, Jenny has also been a New York Life Insurance agent. A member of Rotary since 1991, she admits she was skeptical pursuing an insurance career, but quickly found it allowed her financial freedom and time to explore more opportunities in music. In August, Jenny plans to retire from her insurance career to teach promising young vocal students.

Kyle Case, the Executive Director of the Huntsman World Senior Games, has always loved sports. In his hometown of Ashton, Idaho, Kyle was one of four boys and two girls in his household and has the distinction of being "the only Case boy who didn’t take state in wrestling!" However, he prides himself on his ranking of 4th in his graduating class of 32 students! Following high school, he served an LDS mission in Brazil where he met his wife . . . who is from Delta, Utah. After their marriage, they moved to Cedar City where they managed an apartment house for eight years and welcomed a daughter, now age 12 and a son, now age 10. He completed a bachelors degree in communications at SUU in just three years. His senior project was to develop an advertising plan for the Utah Summer Games Extreme Sports program. He placed in the top ten of marketing students nationwide and by that time had "fallen in love with the Utah Summer Games. When they offered me the position of Executive Director, I jumped at the chance. In four years of great growth, we increased the number of participants from 6200 to nearly 9900." When Kathie Thayne decided to step down from her leadership role with the Huntsman World Senior Games, she approached Kyle who "was hesitant, but it has been an amazing experience. This year we are adding shooting, bringing the number of sports to 26 . . . and we anticipate 10,000 athletes. We have 265 softball teams signed up and we haven’t even officially opened our registration yet."
Posted by Linda Sappington at 8:35 PM No comments: