Rigby Shares Past and Future of Heritage Choir

OPENING: Don Pendleton was in his usual place as Sergeant-at-arms noting the presence (or absence) of members and visitors to SGR. Ray Robinson led members in an upbeat rendition of “You’re A Grand Old Flag.” Janet O’Riley led members in a recitation of the 4-Way Test. Tom McArthur invited members to follow her in the Pledge of Allegiance. Kurt Johnson asked for the blessings of heaven on the meeting and the meal. Allen Hilton conducted a spirited Horseplay while Jack Petersen collected fines on behalf of this year’s Dictionary Project! 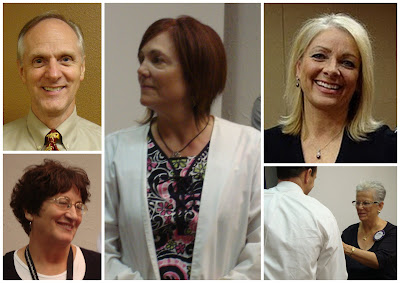 ANNOUNCEMENTS: Paul Harris Fellows were awarded to several members - and family - of SGR, for a donation of $1000 each, including Cindy Strobell (Dan), Lois Lang (Nick), Linda Baker, Jenny McDowell, and to Allen Hilton - his 4th PHF!

PROGRAM: Ray Robinson introduced Floyd Rigby, Director of the 200+ Southern Utah Heritage Choir who conducted the 13 years before he “retired” and has now been enticed back to the assignment. For at least the next year, Floyd plans to commute back and forth between his home in Highland and the choir assignment in St. George due to the demands of his familybusiness. According to the director, the choir is now larger and better than it has ever been with vocalists from all walks of life. “We have mothers, fathers, doctors, teachers and plumbers!” 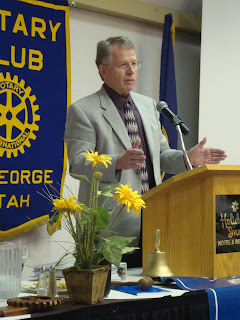 “The purpose of chorale music is to develop talent, discipline and responsibility; highlight our cultural heritage, share values, increase knowledge . . . and of course, our gifts are all we get to take with us into the next life,” he said.

Founded in 1994 by Rigby and Dixie Leavitt, then president of the St. George Temple Visitor Center, the Southern Utah Heritage Choir has now become a musical voice in the region. The choir has toured and performed in the Czech Republic, Armenia, Mexico, England, Scotland, Washington DC, New York’s Carnegie Hall and most recently in China. The Choir was involved this week in the dedication of the newly remodeled St. George Catholic Church and is preparing for upcoming concerts including the Choral Festival Concert (Saturday, September 11 at the Cox Auditorium); the Heritage Christmas Concert on Thursday, December 9 in the St. George Tabernacle and on Saturday, September 11 and Sunday, December 12 in the Cox Auditorium. For more information, call 673-3740.
Posted by Linda Sappington at 6:09 PM No comments: 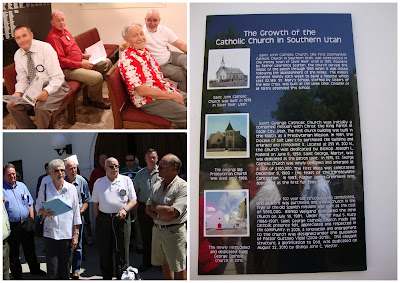 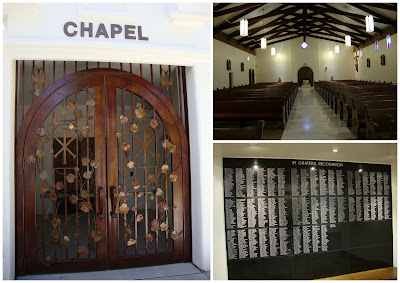 Don Pendleton did his best to keep track of members and visitors gathering in the vestibule of the St. George Catholic Church. In its second week of festivities in celebration of the church’s recent renovation / remodel, members of SGR enjoyed a tour lead by Catholic historian Lorraine Boyce. Rotarians viewed the rose window created by a dying church member, the stations of the cross, statuary including St. Jude, St. Francis of Assisi, St. George and the Virgin of Guadelupe above the podium. There was also a great deal of Catholic art work on display, as well as a list of contributors to the project. 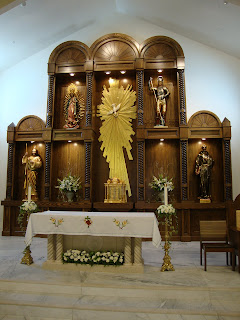 The week’s events include a fundraising dinner with LDS Apostle M. Russell Ballard.

Interaction between Catholics and those of the LDS faith go back in history to the height of activity in the mines at Silver Reef, where the population explosion of those seeking fame and fortune, included Reverend Lawrence Scanlon.

According to “History of Washington County” by Dr. Karl Brooks and Dr. Douglas Alder, relations with the gentiles at Silver Reef were "cautious.” One well-known exception was a friendship which developed between John Menzies Macfarlane (who wrote the American hymn “Far Far Away on Judea’s Plain”) of St. George and Father Scanlon, the Catholic priest in Silver Reef. Both residents of the same boarding house, the two conversed at length and became friends - with a mutual problem. Father Scanlon wanted to celebrate high mass with a choir for his congregation, but his church was still unfinished and he had no choir. Macfarlane proposed the mass be held in the St. George LDS Tabernacle where he was the director of a 30-voice choir. The memorable event which included devout Catholics and curious Mormons was held May 25, 1879. Father Scanlon is reported to have started the mass by saying, “I think you are wrong and you think I am wrong, but this should not prevent us from treating each other with due consideration and respect.”

Following the tour, Rotarians dismissed to Kuzy Hall (named in honor of Father Paul Kuzy who lead the congregation for 13 years and was a member of St. George Rotary Club) for box lunches, drinks and the business portion of the meeting.

President Grant announced receipt of a district grant in the amount of $3000 in support of the dictionary project.

Dan Strobell announced another district grant in the amount of $8800 in support of the Guatemala stove project.

Announcements included Gil Trujillo noting Linda Sappington had underspent nearly $10,000 in preparation for the Utah Rotary District Conference in May. “Since the district doesn’t know what to do with extra funds, they have voted to give it to our club on the condition that it be spent on developing strong youth programs,” noted the former Utah Rotary District Governor.
Posted by Linda Sappington at 6:28 PM No comments:

OPENING: Ray Robinson led the SGR Choir in a spirited rendition of “I’m Looking Over A 4-Leaf Clover” Debbie Justice led members in a recitation of the Rotary 4-Way Test. Stan Gubler invited members to follow him in the Pledge of Allegiance. 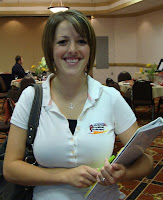 Quinn Hadley asked for the blessings of heaven on the meeting and the meal. June McAfee conducted a lucrative Horseplay while Nancy Neff collected the filthy lucre on behalf of this year’s dictionary project. 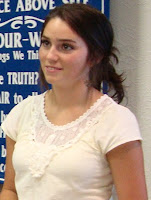 PROGRAM: Vayla Mitchell, a student at Dixie State College, has just returned from two weeks in Thailand with YouthLINC. With a mission to “create lifetime humanitarians” YouthLINC recruits students 16-24 for local and international service in such faraway places as Mexico, Kenya, Peru, Thailand and most recently in Cambodia.

Locally, Vayla volunteered at Kolob Care Center where she met and was befriended by an elderly resident who has now become one of her dearest friends. A member of YouthLINC’s medical committee, Vayla secured 318 toothbrushes, 237 tubes of toothpaste and 144 containers of floss to take to Thailand. In this Asian country, Vayla and 40+ other young people installed two drainage systems for sinks and toilets. The young humanitarians put in a walkway which required 70 batches of 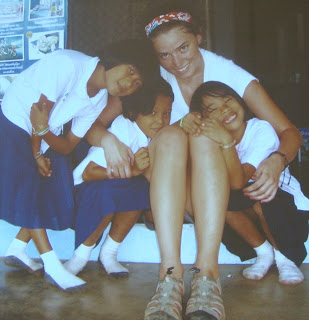 cement they mixed themselves in a wheelbarrow. They also installed sinks, hygiene kits, clothes and shoes collected before the trip, created a playground for Thai children, taught English, distributed school supplies, taught dental hygiene, and organized a carnival for the children.

Vayla’s impression of Thailand? “It was hot and humid, but the children are respectful, disciplined, loving and giving. I want to be them.”
Posted by Linda Sappington at 6:39 PM No comments: 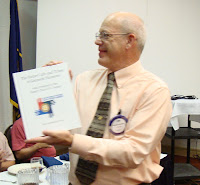 OPENING: Don Pendleton was in his usual place as Sergeant-at-arms noting the presence (or absence) of members and visitors to SGR. Ray Robinson led members in an upbeat rendition of “You’re A Grand Old Flag” June McAfee led members in a recitation of the 4-Way Test. Shar Heitkotter invited members to follow her in the Pledge of Allegiance. Kip Bowler asked for the blessings of heaven on the meeting and the meal. Nick Lang conducted a spirited Horseplay while Jack Petersen collected fines on behalf of this year’s Dictionary Project!

ANNOUNCEMENTS: Jenny McDowell invited members to donate to a kidney transplant for a single woman with five children. Jenny will match funds up to $250.

PROGRAM: President Grant introduced Robert Schaefer, operations manager at Dixie Care and Share who announced Ruben Garcia has been selected, after a long search, to serve as Executive Director.

Citing recent data about DC&S, Schaefer reported 11,025 nights of lodging in the 54-bed homeless shelter; 29,900 meals to short term residents; 1,500,000 pounds of food distributed to homeless individuals and working poor families. The 17 employees and numerous volunteers at the St. George and Hurricane locations also distributed 1175 packages of diapers and 5000 hygiene kits; as well as bus tickets and emergency car repairs provided by funds from the Salvation Army through the holiday Red Kettle Campaign (which last year raised $45,000). Grants provided another $84,000 in rental assistance and utility deposits.

“I’ve never seen a more giving community, but every month is a struggle,” states the operations manager.

Kelly Knowles, a former resident of the homeless shelter who now works as the food bank manager added, “the lines begin to form by mid morning.”

Schaefer added the program is looking for funding to double the size of the current facility. 70% of those seeking assistance through DC&S are from outside the county and 2/3 are men. “However, our greatest need is for baby food and diapers,” notes Shaeffer, “and cash! We really, really need cash donations.”
Posted by Linda Sappington at 7:41 PM No comments:

OPENING: Ray Robinson led the SGR Choir in a pensive rendition of “My Country, Tis of Thee.” Durant McArthur invited members to follow him in the Pledge of Allegiance. Phil Hall asked for the blessings of heaven on the meeting and the meal. Greg Basso led members in a recitation of the Rotary 4-Way Test. Terance White conducted Horseplay while Laura Taylor collected the filthy lucre on behalf of the club dictionary project. 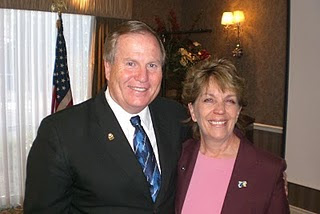 PROGRAM: District Governor Penny Atkinson shared her appreciation for the long history of service among members of SGR, including service by five members as Past District Governors (Gil Trujillo, Jim Coleman, Sterling Spafford, Doug Quayle and Eldon McArthur). She also expressed affection for Ray and Ruby Robinson for all they have given in support of the district’s youth programs; and, to Gil and Pat Trujillo and Linda Sappington for the outstanding district conference in May.

PDG Kelly Atkinson introduced his project as the district’s “first dude” - the Rotary license plate. Currently, the district is working to find 750 Rotarians who would be willing to purchase the license plate - in support of youth programs - if it were produced by the state of Utah. 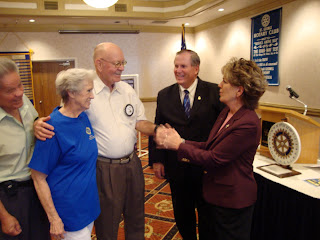 DG Penny outlined “Eight Out of the Gate” - her goals for the district during her year as district governor. Her 8 goals include (1) a stable and growing budget; (2) membership (“grow or die”); (3) strong clubs (with effective meetings planned well in advance); (4) support for the Rotary foundation; (5) expand clubs; (6) support for youth programs; (7) 15% of club membership attending the district conference (May 12-14 in Cedar City); and, (8) attendance at the All Clubs Celebration of 100 Years of Rotary in Utah (January 15, 2011 in Salt Lake).
Posted by Linda Sappington at 9:00 PM No comments: