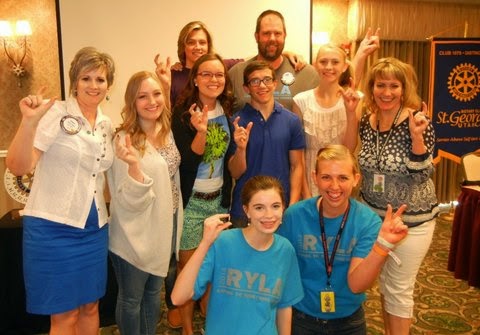 TODAY IN ROTARY members of SGR, meeting at the Best Western Abbey Inn, were treated to an outstanding program including a Rotary Minute by Durant McArthur reading from his father PDG Eldon McArthur's memoirs about meeting with the LDS First Presidency to discuss polio eradication.  Today members and visitors also saw Jim and Margaret Coleman present two of their children – Julie Coleman Theurer of Redmond, Washington and Dean Coleman of Leesburg, Virginia – with these two Paul Harris Fellows moving the Coleman family "this close" to being a “100% PHF family.” 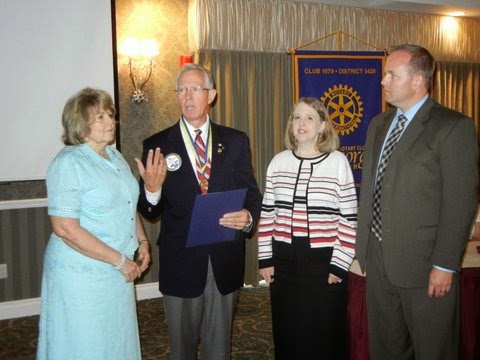 The remainder of the program was devoted to hearing reports from 6 of 15 students from Washington County who attended RYLA in Heber City on the weekend of September 18-20.  Selected through a rigorous application process for their leadership ability, these young men and women, ages 14-18, called their RYLA weekend, “excitingly cross-cultural, awesome, life-changing and inspiring.”

Among the fall leaves, students had the opportunity to “Aspire to Something Higher” through leadership activities including public speaking and learning about other cultures through interaction with Rotary exchange students from around the world.  According to one young attendee, “we also learned everyone can be a leader … and everyone can be a follower.”  Another noted, he had learned to be a “better leader and a better person” through the program.

Mindy Case, who attended as a facilitator with her two children, noted, “it was definitely not a vacation.  We were up at 7 a.m. and worked and played hard until 10 p.m.”

Every RYLA program, which is under the direction of the each Rotary district, covers the core topics of fundamentals and ethics of positive leadership, communication skills, problem-solving and conflict management, Rotary’s purpose and service in the world community, building self-confidence and self-esteem and the elements of community and global citizenship.
Posted by Linda Sappington at 4:55 PM No comments: 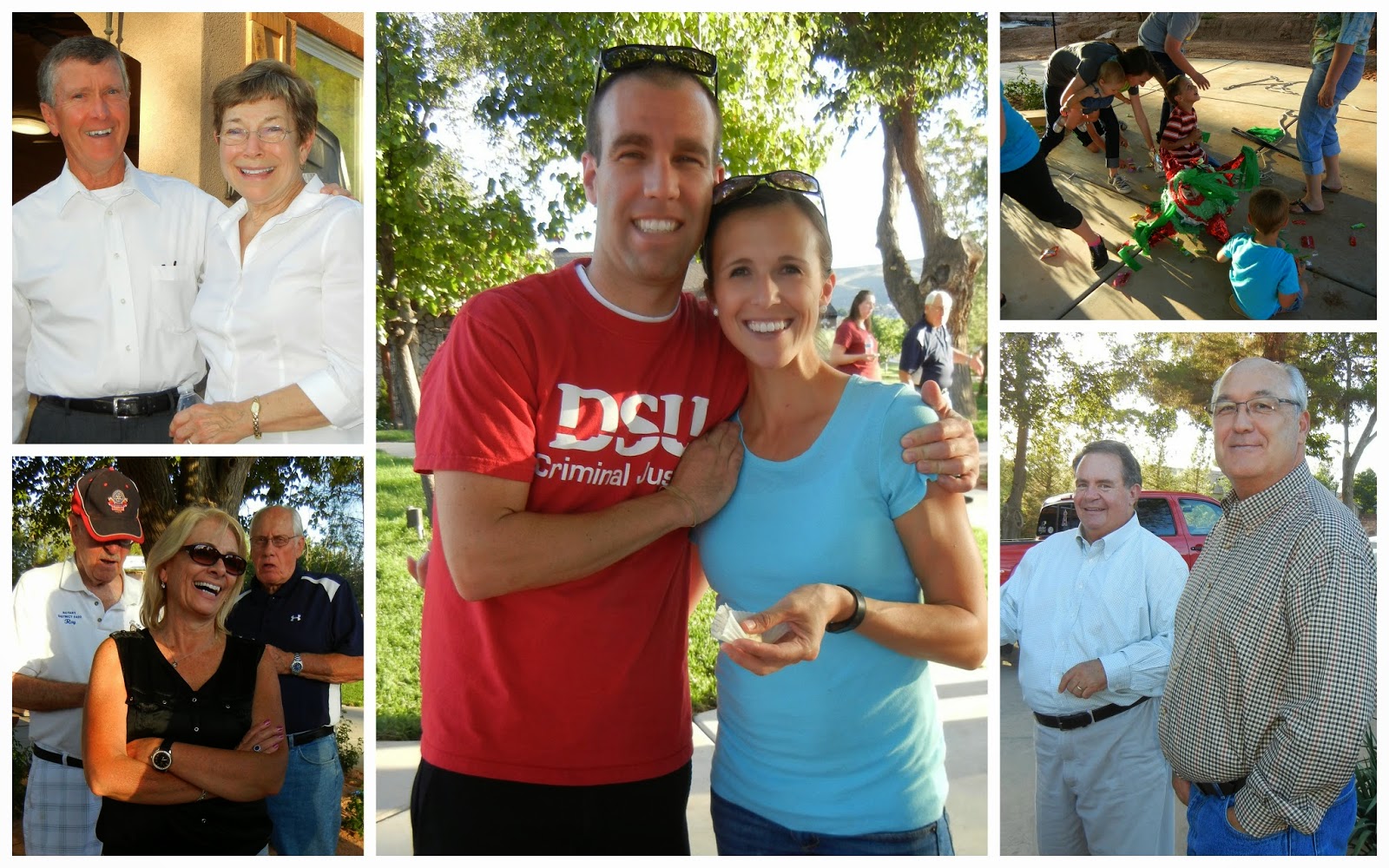 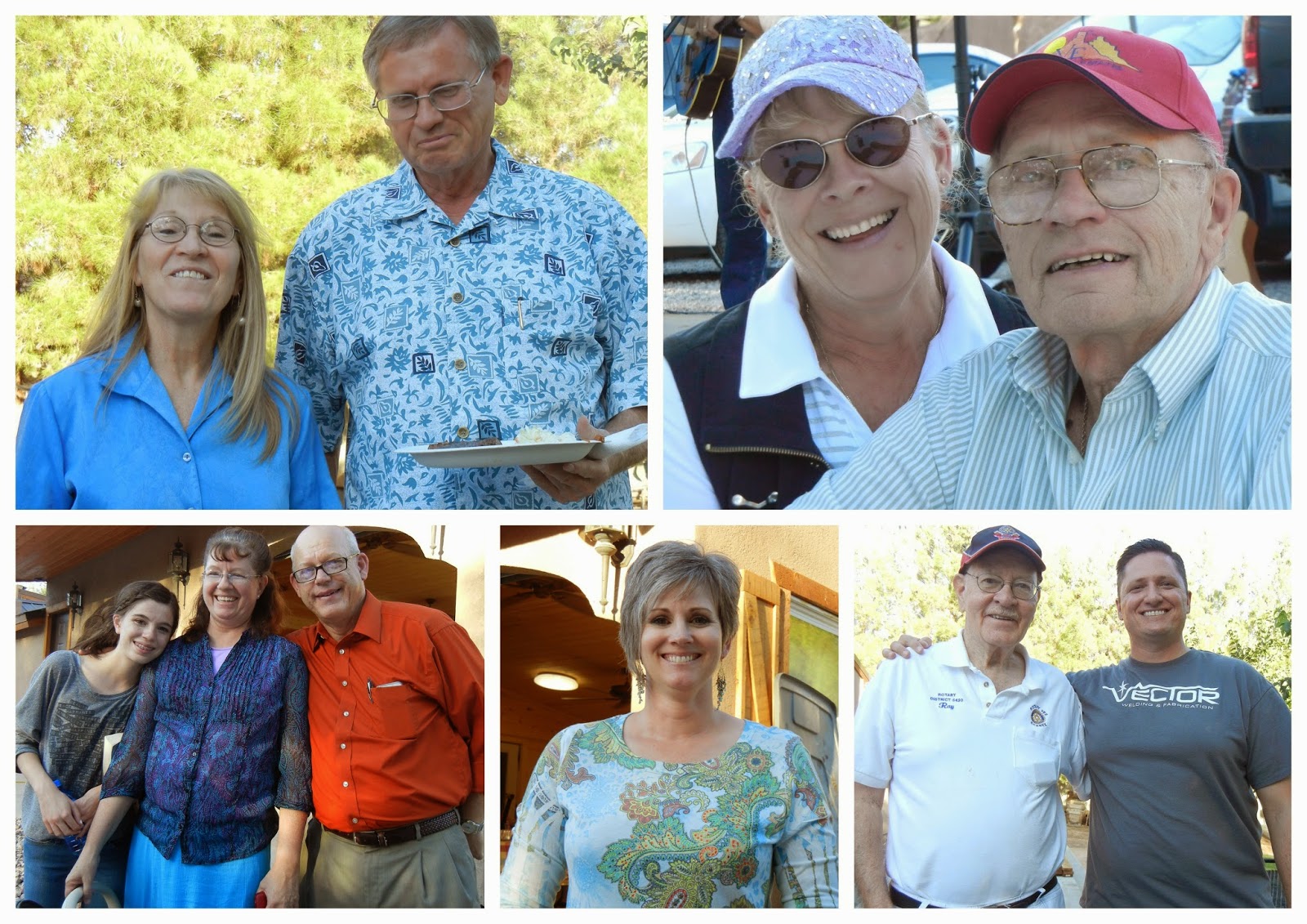 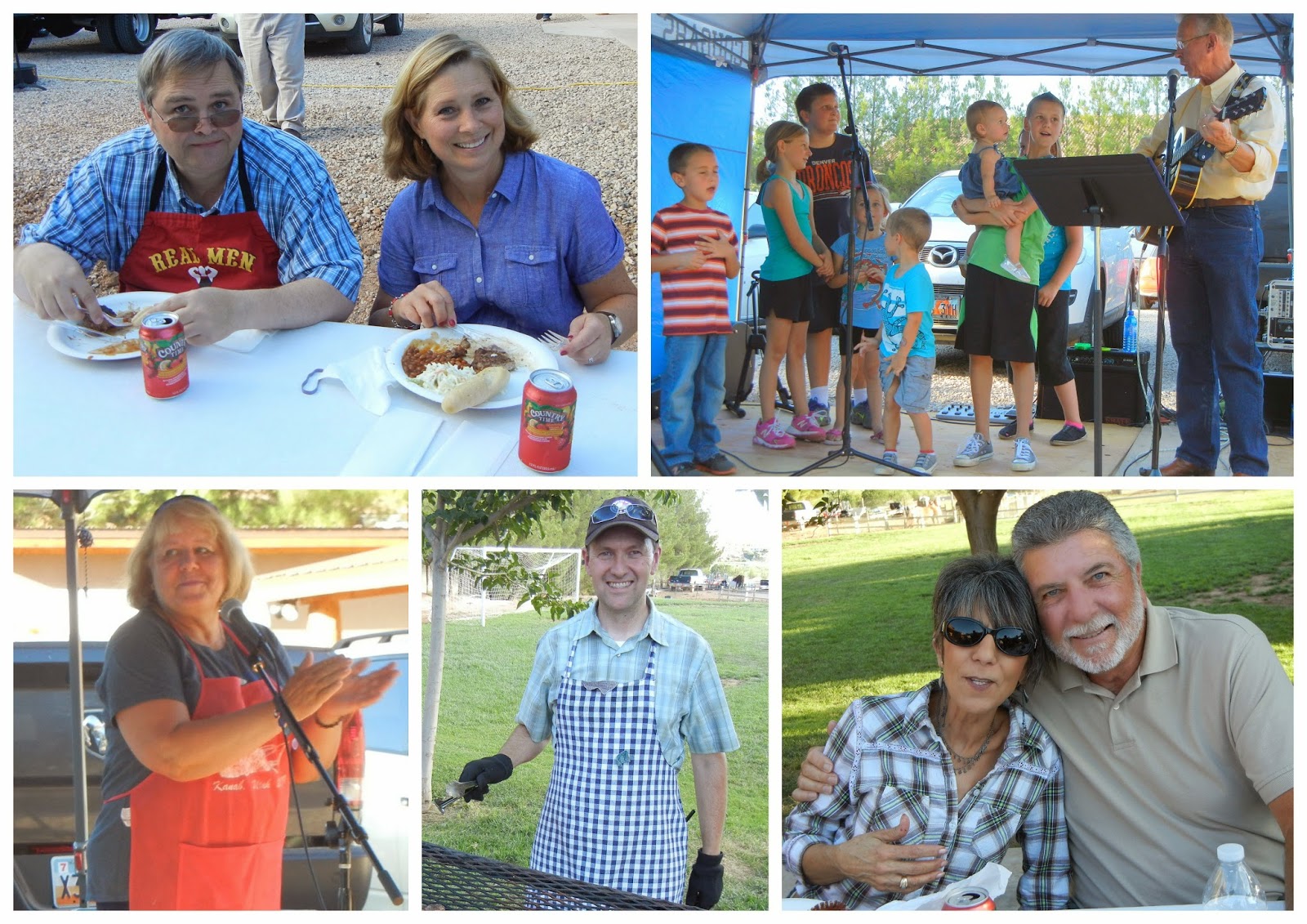 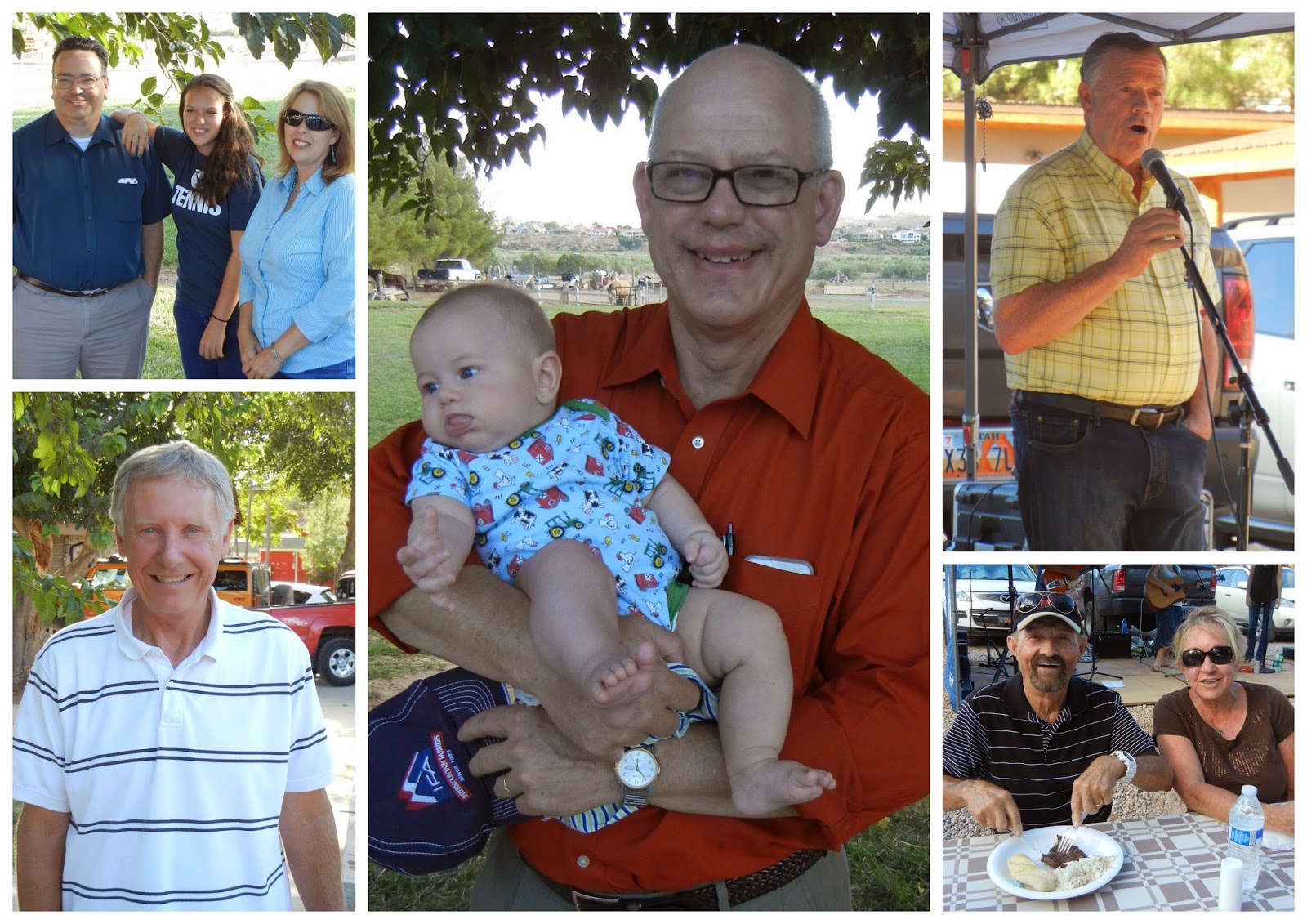 More than 70 Rotarians and family members enjoyed the great summer evening of Thursday, September 25 "down on the farm" at the home of Phil and Renee Hall.  Entertainment was outstanding, with poetry by Dan McArthur and music provided by Jim Coleman on his guitar (accompanied by Rotary children) and the talented Sizemore kids performing as "Beans and Wheels."  Dinner included steaks grilled-to-perfection by Meat Master Terance White, coleslaw from Albertson's Deli, bread sticks from the Pizza Factory, and delicious cupcakes from 25 Main Street Cafe.  The children had a great time emptying a piñata filled with candy and everyone enjoyed the chance to explore Phil's farm.  Thanks to everyone who came out and to all who helped make this another enjoyable Rotary social event.

Posted by Linda Sappington at 9:41 PM No comments: 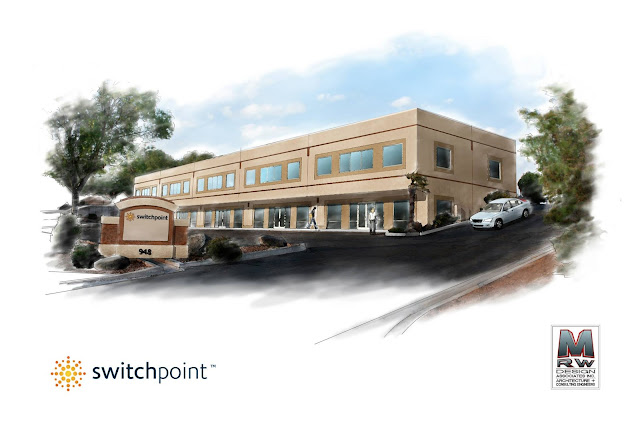 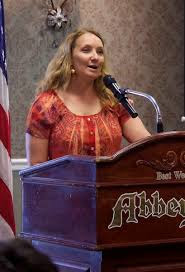 Carol Hollowell, Director of the new SwitchPoint Shelter and Resource Center at 948 N. 1300 West shared the organizational structure and plans for the facility created, in a partnership with the City of St. George and more than a dozen government agencies and non-profit organizations, to help the homeless and others struggling to make ends meet.  According to Hollowell, the homeless face many obstacles to becoming functional members of society. The Switchpoint Community Resource Center provides the support and services needed to get the homeless back on track, all in one central location. Switchpoint holds the promise of a fresh start and ample opportunity to improve one’s circumstances.

The Switchpoint Community Resource Center is equipped to accommodate up to 64 individuals who are in need of temporary housing. Each of the 16 rooms has its own shower, sink, and toilet and the facility has a fully-functioning kitchen, laundry room, multi-purpose room, pantry, and a training center with 50 computers. The need for Switchpoint is apparent, as the resource center was filled to capacity the first day it opened on August 29, 2014.

Posted by Linda Sappington at 7:45 AM No comments: 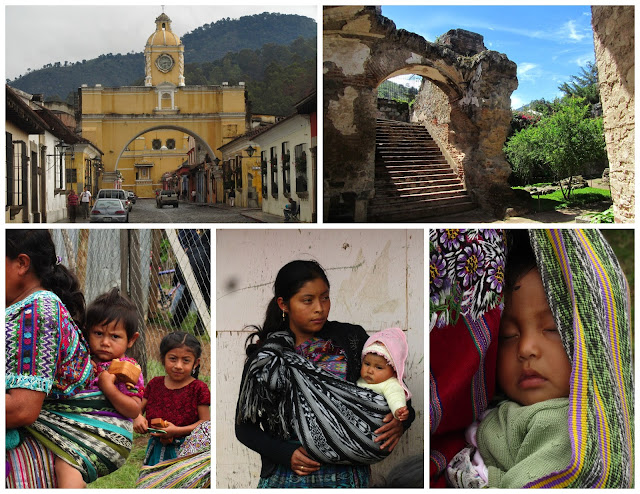 Ted Dodge, a nearly-new member of SGR, today shared his experiences with the Incaperina project in Senahu, Guatemala. According to Ted, this 5-year-old humanitarian project as part of a longstanding partnership with the non-profit Charity Anywhere organization, provides complete nutrition to expectant mothers and their newborn infants for only $1 per week and nutritional information for Mayan women.

In May of 2014 working with Charity Anywhere Foundation a group of 8 people went to San Jose DeChaca to work with the Mayan Echo Homestead.  Located 30 minutes from Panajachel and Lake Atitlan in one of the poorest areas of Guatemala, Greg and Lucy Jensen created the Homestead on 2 acres of land where they teach Guatemalan woman how to create square-foot gardens and grow vegetables.  In exchange for 10 hours of labor, the woman receive a grow box. They are also taught how to cook the vegetables for their family. Greg and Lucy have lived in Guatemala for 5 years with their three children.

Posted by Linda Sappington at 2:21 PM No comments: 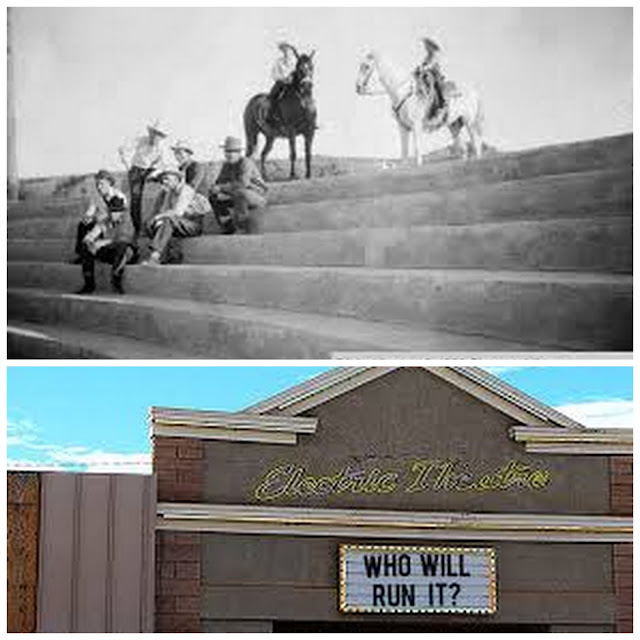 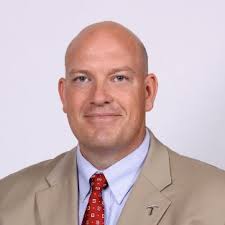 Today in Rotary Tuacahn’s Executive Director of Development Jeff Fisher explained the proposed RAP tax (Recreation, Arts and Parks Enhancements), which if approved by Washington County voters, will mean an increase in sales tax of 1/10 of 1 percent.  Similar to Salt Lake County’s ZAP (Zoo, Arts and Parks) and Cache County’s RAPZ (Recreation, Arts, Parks and Zoos) taxes, this program will likely go before voters on the November 2014 ballot to benefit established and new Arts and Recreation programs throughout Washington County.  If implemented, 85% of funds collected ($2.2 million in the first year or two, according to estimates) will be distributed to local municipalities to use as they see fit to support projects such as the renovation of the SunBowl and the Electric Theater.  The remaining 15% will fund grants to arts and cultural organizations in the community as awarded by a 7-member committee.


Posted by Linda Sappington at 7:58 AM No comments: