OPENING: Don Pendleton was at the Abbey Inn, in his position as Sergeant-at-Arms, noting the presence (or absence) of members attending the All Clubs Breakfast. Ray Robinson led (surprised) members of SGR, Red Rock and Dixie Sunrise Rotary in a cheery rendition of “America.” A recitation of Rotary’s 4-Way Test of the things we think, say and do and the Pledge of Allegiance was assigned to a member of Red Rock Rotary. 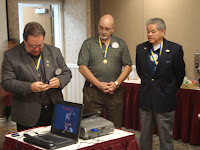 PRESENTATION OF PAUL HARRIS FELLOW AWARDS: TRF chairman Phil Hall presented Paul Harris Fellow Awards to Greg Basso (his PHF+1) and to Gil Trujillo (his PHF+1). (Donors of US$1,000 or more to the Annual Programs Fund, PolioPlus, or the Humanitarian Grants Program, or people who have that amount contributed in their name, can be recognized as Paul Harris Fellows. Each new Paul Harris Fellow receives a commemorative certificate and a pin). 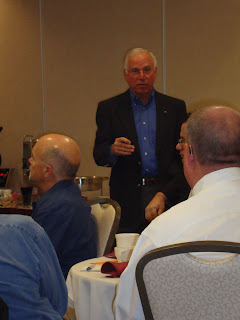 PROGRAM: Fred Berthrong, district chairman of TRF, spoke of the beginnings of Polio Plus in 1985 when a doctor in the Manila, Philippines Rotary Club suggested this dreaded disease should and could be eradicated from the earth, but “finishing the job is the hardest part because Rotary works through ‘boots on the ground.’” Noting the amazing accomplishment of inoculating 175 million children around the world in just one week, Berthrong shared recent (as of this morning) statistics on the progress being made by this, “the largest public health campaign in the history of mankind.” The last countries which are still reporting new cases of polio are Nigeria, India, Pakistan and Afghanistan. To reach the Bill and Melinda Gates Challenge goal of $200 million raised by members of Rotary, Berthrong estimated District 5420 needs to raise $264,000 in the next four years. That would mean every one of the district’s approximately 1815 members would need to donate only $145.45 each!!!

The new Future Vision Plan (District 5420 is one of only 300 Rotary districts involved in this pilot program worldwide) includes local and international needs (i.e., literacy, water, youth and the aged, health, shelter, disaster recover and peace and conflict resolution).
Posted by Linda Sappington at 6:50 PM No comments: 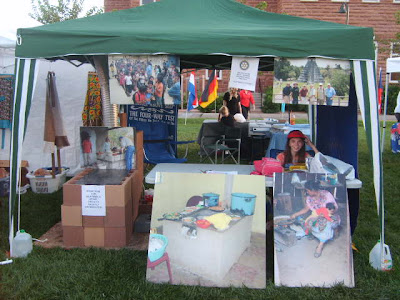 The third week of October was busy for members of St. George Rotary Club with “service above self” the focus of three projects.

“It seemed like a good idea at the time,” said Ken Sizemore, who decided to create a mock Guatemalan stove at the Huntsman World Senior Games 3rd Annual International Festival on the weekend of October 15-16. After tracking back and forth from his car to the Rotary booth at the Town Square, Sizemore realized carrying a dozen cinder blocks for the project was probably not the best idea he’d ever had. Just the same, the booth was a hit, with lots of interaction with individuals interested in SGR’s international project which helps install stoves in Mayan villages where women still cook over open flames. In addition to comments about the stove, Ken, Ray and Ruby Robinson, and members of Rotaract collected $51 in donations and a number of visitors expressed interest in joining Rotary! 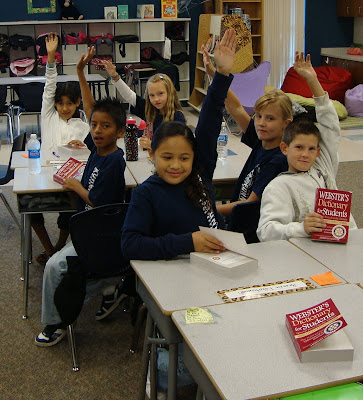 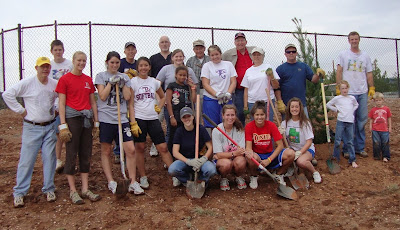 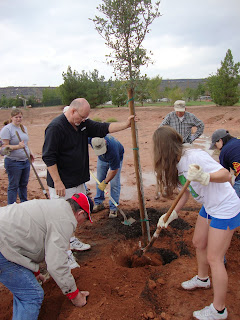 After a night of substantial rainfall, the sky cleared on the morning of Saturday, October 23, as Rotarians gathered to take part in a tree planting at the SK8 Park. Gil Trujillo, Grant Carter, Reed Noble, Linda Sappington, Greg Basso, Ken Sizemore and Linda Baker, along with approximately a dozen members of DSC Rotaract Club, dug deep into the thick, clay-laden mud to plant ten pine and other types of trees. Despite the slip-slidding around, the social interaction was pleasant and the minimal amount of effort by many willing hands will one day produce large shade trees and beautiful pines.

Thanks, on behalf of a grateful community, to all who supported these projects.
Posted by Linda Sappington at 8:21 PM No comments:

OPENING: Don Pendleton was in his usual place as Sergeant-at-arms noting the presence (or absence) of members and visitors to SGR. Ray Robinson led members in a decidedly offbeat rendition of “Home on the Range” Ken Sizemore lead members in a recitation of Rotary’s 4-Way Test of the things we think, say and do. Bob Bramlage invited members to follow him in the Pledge of Allegiance. Richard Isom asked for the blessings of heaven on the meeting and the meal. 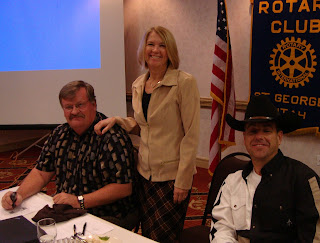 ANNOUNCEMENTS: Ken Sizemore expressed his gratitude to members who participated in the International Festival last weekend noting the mock-up of the Guatemala stove project was well received. Donations amounted to $51 - an afterthought on his part to ask for contributions to the project - and several names of those interested in more information were collected. National Make-A-Difference Day on Saturday, October 23 will include a tree-planting project at the SK8 Park from 9 a.m. - noon. Plan to bring sunscreen, hat, bottled water, gloves, shovels and/or a pick and wear close-toed shoes.

Vayla Mitchell, a member of DSC’s Rotaract Club, announced 9 students have been accepted for an international service experience with YouthLINC. Sponsors are needed for 2 students. In true Rotary fashion, a few members stepped up to offer funding support.

Benjamin Carter, sponsored by Grant Carter and Jenny Lee Taylor, sponsored by Jenny McDowell have been proposed for membership in SGR. Please contact a board member with comments relating to these new members.

PROGRAM: Dwight and Kathy Andrus and Jay Lane from the Cougar Adventure Academy, a new Christian based school for children age 8-11, shared their plans and enthusiasm for helping kids in a family home environment. According to Kathy Andrus, more and more single parents are struggling economically while needing to leave their children unsupervised for long periods of time each day. Some children suffer from reactive assistive disorder, particularly those who have been adopted. Many are disenfranchised. In a multi-faceted program which uses computer learning as well as hands on disciplines such as gardening and equine therapy, swimming, sports and support from parent coaches, 48-60 students will participate in 6-9 month stays at a cost of $3000-$5000 a month.
Posted by Linda Sappington at 12:44 AM No comments:

OPENING: Don Pendleton was in his usual place as Sergeant-at-arms noting the presence (or absence) of members and visitors to SGR at the Holiday Inn. Ray Robinson led members in a harmonious rendition of “Battle Hymn of the Republic.” Bob Bramlage led members in a recitation of the 4-Way Test of “the things we think, say and do.” Bob McMillan invited members to follow him in the Pledge of Allegiance. Terance White asked for the blessings of heaven on the meeting and the meal. Reed Noble conducted a lucrative Horseplay, on behalf of the Guatemalan stove project, while Janet O’Riley collected fines!

ANNOUNCEMENTS: PDG Gil Trujillo explained the process for amending club bylaws, after which Grant Carter asked members to vote to accept $10,000 in unexpended funds from the Utah Rotary District Conference in May to be used exclusively for official Rotary youth programs (i.e., Interact, Rotaract, RYLA and Youth Exchange). Voting was unanimous in the affirmative to create the Linda Sappington Youth Scholarship Fund.

June McAfee reported Rotarians are invited to meet at Reed Noble’s office to put stickers in the dictionaries after which they will be ready for distribution to 3rd graders throughout the school district. Members are also invited to call her for information about the project.

Ken Sizemore asked members to sign up for a shift on October 15-16 at the International Festival as part of the Huntsman World Senior Games. Volunteers are needed to man the booth. The city of St. George has also approached Ken about helping on Saturday, October 23 (National Make-A-Difference Day) to plant trees at the SK8 Park.

Greg Basso introduced the Challenge of 80 wheelchair project. Chairs cost approximately $150 each. Over the next 15 months (until December 31, 2011) members can donate $10 per month to reach the goal of 80 wheelchairs.

PROGRAM: Today’s “Know Yer Ro” features two relatively new members: Bob McMillan and Bob Miller. McMillan, the oldest of 6 children, grew up in Layton, Utah. He served an LDS mission in Calgary, Canada before taking a job with Lindquist Mortuary in Layton. He attended school in Kansas City, KS, graduating with a degree in Mortuary Science then relocated to Flagstaff, Arizona. In 2006, he and his family moved to St. George where he took a position with Heideman Mortuary. In 2008, he opened McMillan Mortuary and is gradually getting used to the summers in Dixie. He and his wife Sue have four sons ages 20, 17, 15 and 7. Together the family enjoys sports of all kinds, including basketball in the back yard.

Bob Miller notes he “has been visiting SGR longer than many members have been members!” A Rotarian from New York state since 1975 - with 13 years of perfect attendance - Bob has spent a portion of every year since 1995 attending St. George Rotary Club. A world traveler, Bob reports he has “made up meetings in England, Ireland, Wales, Scotland, Norway, Finland, Singapore and France.” For 42 years, Bob has been involved in education - first in elementary schools and later teaching teachers at the State University of New York, which he calls “the most rewarding job ever!” Bob and his wife Sally are the proud parents of three who have produced 7 “grands” and 3 “greats.”
Posted by Linda Sappington at 1:46 PM 1 comment: