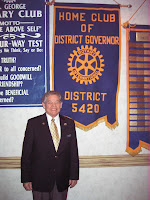 OPENING: Terance White assumed the position as Sergeant-at-Arms meeting and greeting members and visitors to the 3775th meeting of SGR. Ray Robinson led the SGR Choir in a patriotic rendition of "America" in honor of Team USA’s success in the 2010 Winter Olympics in Vancouver, British Columbia. Bob Bramlage invited members to follow him in the Pledge of Allegiance and Chris Coons asked for the blessings of heaven on the meeting and the meal. Carl Lamar conducted Horseplay while Sam McArthur collected fines on behalf of the Washington County School District’s Sterling Scholar Program.

In the absence of President Ken Sizemore, Grant Carter (president elect) conducted the meeting announcing an All Clubs Meeting on March 25. Wally Brown from the District 5420 will be present to talk about literacy issues. The meeting, hosted by Dixie Sunrise Rotary, will be held at the Abby Inn beginning at 7 a.m. for breakfast.

Grant also announced changes to the RYLA program which will be held six weeks earlier this year and at the Heber Valley Camp. Each club is encouraged to identify 3 candidates for this youth leadership opportunity.

Ken Seefeld, rested and relaxed after a cruise to the Panama Canal, announced - after several weeks of going through the financial books, "everything balances including EREY donations. However, there is more than $11,000 in uncollected funds and the board agreed to begin sending notices of unpaid balances. Club members will soon be receiving an invoice for voluntary donations to Haiti relief."

PROGRAM: District Governor Gil Trujillo expressed his amazement that his year is already half over. He also noted the district’s biggest issue is membership. "We can get them, but we can’t seem to keep them," said the Governor about new Rotarians. "The solution is to get them involved immediately. The state’s most successful clubs have meaningful projects, everyone serving on a committee and grants to move them along toward the accomplishment of their mission." Governor Gil also announced he has closed down the Price Rotary Club and the West Valley Rotary Club because they are no longer functioning as they should. He also reported on a recent meeting with Utah State Governor Gary Herbert where he presented a "State of Rotary in Utah" address. He indicated strong support from the state’s top official who believes, "civic clubs can do things faster, better and more efficiently than government!"

Former SGR member Steve Johnson introduced Steve Bingham, St. George City Director of Recreation who shared information about the upcoming NJCAA Women’s Fast Pitch Softball World Series. "The 16 best junior college teams have elected to play in St. George (May 17-22) because of the quality of our facilities and our community."

Bingham also announced Michelle DeLoso, the national marketing director for Adidas and a resident of Ivins, will be the keynote speaker at the tournament banquet. For more information about how individuals or the club as a whole can help make this event a success, call Steve Bingham at 627-4572.
Posted by Linda Sappington at 8:41 PM No comments: 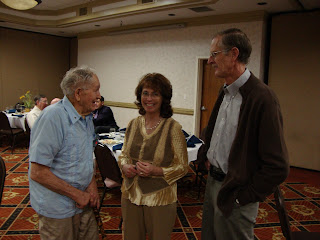 OPENING: Donald Ira Pendleton was at his post as Sergeant-at-Arms meeting and greeting members and visitors to the 3774th meeting of SGR. Ray Robinson led the SGR Choir in a rousing rendition of "When the Saints Go Marching In" in honor of the New Orleans Saints win over the Indianapolis Colts in Super Bowl XLIV (or 44 for us non-sports fans). Jeff Eggertz invited members to follow him in the Pledge of Allegiance and Jeff Morby asked for the blessings of heaven on the meeting and the meal. Reed Noble conducted a profitable Horseplay while Shar Heitkotter collected fines on behalf of the Washington County School District’s Sterling Scholar Program.

President Ken noted the date for the Guatemala trip is set for April 23-30. The estimated cost is $1700-$2600. Club members planning to travel with Dan Strobell must commit by mid-February.

President Ken read a letter from Wally Brown which noted "we are very, very close to Rotary International’s goal of eradicating polio from the earth. In 2009, there were only 388 new cases of polio in Nigeria. In India, only 732 . . . and there have been no new cases in either country since January 5, 2010!!!"

Greg Basso asked members of SGR to consider donating wheelchairs to new amputees in Haiti. A small case contains 110 chairs, a large case contains 280. There is an immediate and pressing need for help in the country ravaged by a deadly earthquake last month. Chairs can be purchased at a cost of $75 each. For more information, see Greg.

PROGRAM: Linda Baker introduced Marta Heap, a Rotarian snowbird from the 12-member Star Valley, Wyoming Rotary Club who has traveled several times to Rumania and Mongolia to share her medical expertise as an RN. Her particular specialty is OB/Gyn. She shared her experience in Mongolia, noting neo-natal care is 50-60 years behind the times. In a 600-bed hospital, which specializes in childbirth and female health issues, "they are still using equipment which was developed in the 1700's." She also noted jaundice is a particularly deadly to newborns in that country where the infant mortality rate is approximately 20 per 1000 live births (compared to 63 a few years ago). She also reported medical education is about the equivalent of an associates degree in the United States and the nation’s "top health experts are hungry for education, information and supplies of any kind."
Posted by Linda Sappington at 7:16 PM No comments:

OPENING: Donald Ira Pendleton was at his post as Sergeant-at-Arms meeting and greeting members and visitors to the 3773rd meeting of SGR. Ray Robinson led the SGR Choir in a rousing rendition of "Let There Be Peace on Earth." Linda Sappington invited members to follow her in the Pledge of Allegiance and Lee Sheets asked for the blessings of heaven on the meeting and the meal. Terance White conducted a energetic Horseplay while Greg Basso collected fines on behalf of the Washington County School District’s Sterling Scholar Program.

Carl Lamar reported on his attempts to get to Haiti, noting there are a lot of politics going on in the recovery process. Rick Schofield indicated there is a great need for wheelchairs and encouraged members of SGR to donate to this cause.
Greg Basso asked for support of the Backpacks for Kids project, now in its 6th year with a history of helping 660 kids. His organization needs volunteers to help with all aspects of the project, but he particularly needs someone to serve as a secretary and the vice president.
President Ken noted the date for the Guatemala trip is set for April 23-30. The estimated cost is $1700-$2600. Club members planning to travel with Dan Strobell must commit by mid-February. 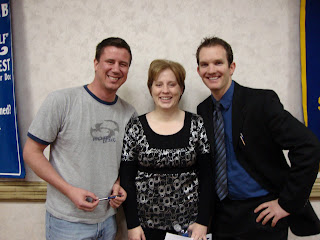 PROGRAM: Linda Baker introduced Dwight Monson who heads up the Dixie State College Scholarship Association, originally formed in 1991 to provide full tuition scholarships to deserving recipients. More than 100 scholarships have been awarded over nearly twenty years based on each students personal vision and goals; life altering challenges; desire to give back to the community and need for a helping hand. Three scholarship recipients shared their personal stories of struggle and success. Michael Lemond dropped out of high school because he "thought I knew it all." Throughout the years, his limited skills have found him going from job to low paying job while moving his family in and out of his parents’ home. With a scholarship from DSC Scholarship Association, he has gone from "homeless to law school."
Jeannette Stratton is a married mother of three who grew up in a home where education was considered "a waste of time." She is the first in her family to attend college and expects to be the first college graduate with a degree in mathematics.
Jarom Foster recalled "the shame I felt growing up with only a 3rd grade education. My father didn’t see the value of school and when my brothers reached the 7th or 8th grade, he would pull them out and put them to work." Because he missed his father and siblings who were working in Moab, he took his mother’s offer to drop out in the 3rd grade and go to work. Although he considered himself "smart and ambitious, I routinely felt embarrassed and scared people would find out." Through a DSC scholarship, Jarom is now on his way to a degree in engineering.
For more information on how to support the DSC Scholarship Association, go to the Dixie College website or call 652-7500.
Posted by Linda Sappington at 9:31 PM No comments: