OPENING: Sergeant-at-Arms Don Pendleton was at his usual post meeting and greeting Rotarians and guests to the 3779th meeting of the Rotary Club of St. George. Debbie Justice invited all citizens of the United States to follow him in the Pledge of Allegiance. Durant McArthur asked for the blessings of heaven on the meeting and the meal. Rick Schofield guided those in attendance in a spirited Horseplay while Jack Petersen collected the filthy lucre on behalf of Polio Plus.

PROGRAM: There has always been a sense - even before a lot of research and expensive studies verified it - that a good belly laugh makes one feel better! But now is a proven fact! Laughter is a simple but revolutionary exercise which lowers blood pressure; helps chucklers worry less; defuses fear, anger and boredom; and changes who we are for the better. Perhaps a sign of the stress most Americans - and the world - are under, more than 6000 Laughter Clubs have sprung up all over the globe since 1995 - the brainchild of Dr. Madan Kataria of Mumbai, India. Even TV personalities Oprah Winfrey, Ellen deGeneris and others have explored the benefits of giggles hosting Laughter Club members on their shows and, in the process, creating stress free audiences. During the Monday, April 26 meeting of SGR, Ron Harrison, a member of the Las Vegas Laughter Club, had Rotarians and guests on their feet to exercise the health benefits of a good laugh! According to today’s presenter, "laughter puts us in the ‘here and now’ of life, helps us intensely experience the moment, and, well . . . it’s just darn fun!"
Posted by Linda Sappington at 7:49 PM No comments:

OPENING: Sergeant-at-arms Don Pendleton was on duty greeting members and visitors to the 3778th meeting of St. George Rotary. Ray Robinson led the SGR Choir in a rousing rendition of "You’re A Grand Old Flag." Reed Noble invited members to follow him in the Pledge of Allegiance. Lowry Snow asked for the blessings of heaven on the meeting and the meal. Sam McArthur stirred members into a frenzy of donations on behalf of the upcoming Utah Rotary District Conference with Jack Petersen collecting the filthy lucre.

President Ken reported on the excellent training provided at the District’s Southern Assembly held in Cedar City on Saturday, April 17.
Janet O’Riley introduced Kristen Nelson, Rotaract President at Dixie State College.
Dan Strobell was pleased to announce Jim Coleman, Reed Noble, Sam McArthur, Dan McArthur and Lowry Snow will be leaving with him for Guatemala on Friday.
President Ken announced District Governor Gil Trujillo also leaves this week for Bolivia with other representatives of the district.
Members are encouraged to bring prospective members to the meeting on Monday, May 3 when the entire program will be devoted to sharing the message of Rotary.
Jeff Morby reported on the upcoming Utah Rotary District Conference Golf Tournament. He is looking for hole sponsors at a cost of $100 - $300 each. All proceeds will benefit the Polio Plus Challenge. 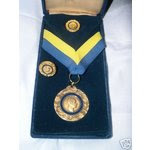 PROGRAM: Pam Graf, Department Director of the Washington County School District Foundation for Students shared her enthusiasm for the organization’s mission noting the Foundation supports students by providing resources required for a quality education which is not provided through traditional funding sources. Through the efforts of a strong board, the foundation is promoted within the community; student needs are responded to; the efforts of the foundation are orchestrated; educators are informed about the inner workings of the foundation; fundraising on behalf of student needs is coordinated and potential donors are educated about the benefits of giving.

Graf also outlined the successes of the foundation including $30,000 which supports the Sterling Scholar Program; $850,000 which has provided level libraries in most of the district’s elementary schools; and, generating $80,000 for a fine arts endowment. Graf said their work alongside SunRiver Development to coordinate the Kite Festival has, in its 11-year history generated $166,000 for the foundation.

Other successes include the development of a second Community Health Center clinic at Millcreek High School where most patients seeking health care have no insurance; support of the Backpacks for Kids program which provides school supplies to more than 650 students each year in the district. Bob Green, who shared the lecturn with Graf, noted the number of children who are classified as homeless in the district has jumped substantially due to the downturn in the economy. 467 students have "doubled-up" (living with relatives or friends), 26 are living in motel rooms; 22 live in shelters such as Dixie Care and Share; 6 live in a car; and 24 are classified as "unaccompanied minors" who have essentially been "thrown away" by their family. "Times are tough," said Green. "There are lots, and lots of stories I could tell about difficult situations in the community. We all need to do what we can."
Posted by Linda Sappington at 5:46 PM No comments: 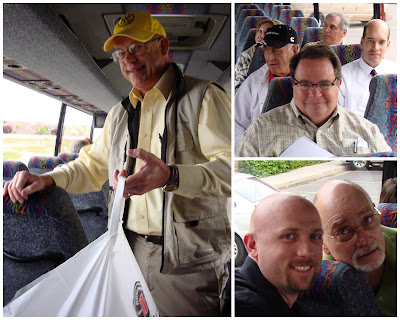 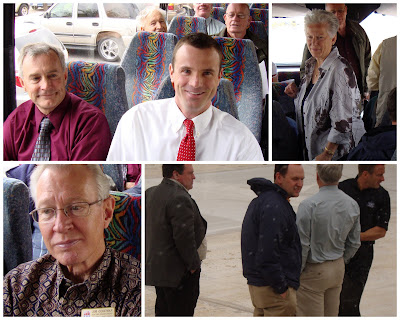 OPENING: The 3781st meeting of SGR started and ended on a bus! Don Pendleton asked for the blessings of heaven on the travel to the new St. George Replacement Airport and on the box lunches provided by Jimmy Johns.

ANNOUNCEMENTS: President Ken encouraged current and next year’s board members to attend the upcoming District Assembly on Saturday, April 17 in Cedar City. He also encouraged attendance at the upcoming Utah Rotary District Conference the weekend of May 13-15 in St. George. 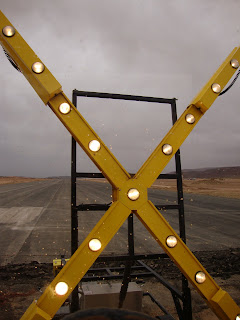 PROGRAM: In a bus on loan from the college - and Asst. City Manager Marc Mortensen as the tour guide - members of SGR traveled five miles southeast of downtown St. George to tour the new St. George Replacement Airport - the nation’s second green-filled airport (Denver was the first) and the largest project in the history of Washington County at a cost of $160 million. The airport will temporarily be identified with call letters DXZ until the current mesa top airport is decommissioned. At that time, the 1203-acre facility will be known as St. George Regional Airport - with a catchment area including seven counties (Washington, Iron, Beaver, Garfield, Kane, Clark and Lincoln) and will once again claim SGU as its call letters. 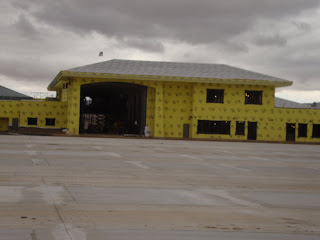 The location was selected out of 15 sites in Washington County considered in the beginning, despite the initial lack of water, sewer, electricity and access - and an overabundance of blue clay. The project has involved more than 15 contractors in the region and includes a new terminal building which is 2.5 times the size of the existing terminal.

From its first day of operations in January 2011, the new St. George Municipal Airport will be able to accommodate planes up to the size of a 737. Negotiations are currently in progress with airlines based in Denver, Phoenix, Dallas/Fort Worth and in parts of California to carry passengers to Salt Lake City and a number of other regional destinations currently not available. Around the perimeter of the new airport, thousands of acres of developable property is also expected to produce long-term economic development growth in the county.
Posted by Linda Sappington at 6:17 AM No comments:

SGR Hears of Other Rotary Successes

OPENING: The 3780th meeting of SGR found Don Pendleton greeting visitors and guests as Sergeant-at-Arms. To open the meeting, Ray Robinson led the SGR Choir in a patriotic rendition of "America, the Beautiful." June McAfee invited members to follow her in the Pledge of Allegiance and Carl Lamar asked for the blessings of heaven on the meeting and the meal. Dan Strobell conducted Horseplay while Greg Basso collected fines on behalf of the Rotary District Conference golf tournament.

ANNOUNCEMENTS: President Ken Sizemore announced Jim Coleman, Reed Noble and Lowry Snow will be traveling to Guatemala in May, in what Dan Strobell calls a "guys getaway week!"

President Ken encouraged current and next year’s board members to attend the upcoming District Assembly on Saturday, April 17 in Cedar City. He also encouraged attendance at the upcoming Utah Rotary District Conference the weekend of May 13-15 in St. George.

It is time to consider a candidate to serve as Utah District Governor in 2013-14.

Greg Basso announced all monies have been collected for the purchase of wheelchairs. Anyone interested in purchasing chairs are encouraged to contact Greg at 680-5178.

Terance White encouraged participation by all members in a new program to increase membership. Current club members have been divided into four teams (Team Truth, Team Fair, Team Beneficial and Team Goodwill). Teams which bring in the most number of new members in the next 30 days will win prizes, including dues paid for a designated period of time and to the individual club member who brings in the most new members will win two movie tickets and a $50 gift certificate for a local restaurant. Points will be given for new members by age, those recruited to fill vacant classifications or bringing former members back into activity. FMI, call Terance at 669-2125. 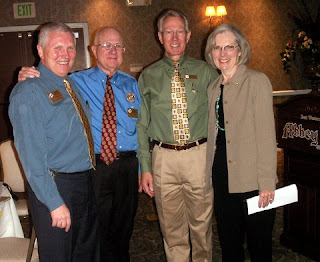 PROGRAM: Linda Baker introduced Marla Shelby-Drabner, president of Dixie Sunrise Rotary Club which meets on Thursday morning at the Abbey Inn and Ed Rogers, representing the membership of Red Rock Rotary Club which meets on Wednesday morning at the Abbey Inn (new location). Shelby-Drabner, president for the second time in her 19-year Rotary history, noted her club is heavily involved in fundraising for charitable giving locally, and particularly in the area of public safety. Dixie Sunrise is responsible for the purchase of equipment for the SGPD Bike Patrol and for the local search and rescue organization, including ropes, scuba gear and a drug dog. International service focuses on eye health in Mexico where the Washington County club gathers and distributes used medical equipment. Last year, they were also the "unofficial" host to the GSE team and have recently become involved in humanitarian service in Costa Rica. According to the president, her club has collected books for Purgatory Correctional Facility; been involved in trail clean-up; created and distributed Christmas baskets for those receiving Meals-on-Wheels; created a blog to chronicle the history of the club (see http://rotaryclubofdixiesunrise.blogspot.com) . . . and 100% of its membership are Paul Harris Fellows.

Ed Rogers called his "the little club that could!" Washington County’s newest Rotary Club, chartered 7 years ago, has monthly service projects with most members participating. The most profitable is valet parking at the Washington County Fair which generates enough funding to provide small grants in support of local organizations with a focus on youth. This year, Red Rock Rotary Club will distribute approximately $7000 in grants. Other projects supported by Red Rock include the Utah Academic Decathlon, a dictionary project and the Red Rock Music Festival, scheduled this year on Saturday, May 8 in the Town Square.
Posted by Linda Sappington at 9:16 PM No comments: