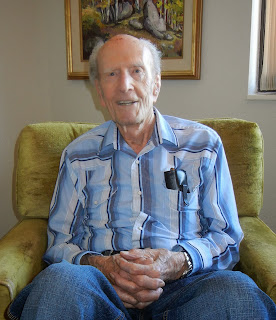 Elwin Anderson of Bloomington was recently recognized on the 22nd anniversary of his membership in St. George Rotary Club where he is also the club’s oldest member.  In fact, at nearly 102 years old, he is likely the most senior of any of more than 2000 members in 47 Rotary clubs in the Utah District – perhaps even the oldest in all of Rotary International’s worldwide membership of more than 1.2 million!  A true believer in Rotary’s motto of “service above self,” Anderson joined in 1991 and has served in a variety of assignments.  In 1998-99 – at the turn of the century – he was also elected Rotarian of the Year for his service to his club, the community and the world!
Although his health remains good, he is no longer able to serve in ways requiring strength and agility, but this centenarian continues to enjoy his weekly association with his club members and supports the goals of Rotary International through generous donations to Rotary International programs, including Polio Plus.
Nicknamed “Andy” since childhood, he began his more than ten decades of life in the tiny community of Oasis (near Delta), Utah in March of 1912!  He spent his first 19 years on the family farm before taking on a variety of odd jobs up and down the Pacific Coast between Los Angeles and San Francisco.  In 1933 he began a career with Chevron, during which time he met and married June Diebold. A veteran of World War II, he served in the U. S. Marine Corps in the South Pacific.  After the war ended, he and June owned and operated a service station in California for several years, then changed careers to real estate.
The couple retired to St. George where the real estate market was booming.  June passed away in 2008 and although he lost his "best friend and partner of nearly 70 years" Andy has maintained his good humor and his lifelong desire to support his community.  Thanks for all you have done for our club and our community.  We love you, Andy.
Posted by Linda Sappington at 9:02 PM No comments: