Bob Bramlage, SGR’s Sergeant-at-Arms was on duty greeting Rotarians and others visitors to the 3727th regular weekly meeting of St. George Rotary. Ray Robinson lead the SGR Choir in the patriotic "America." Lee Warren invited members to follow him in the Pledge of Allegiance and Steve Radmall asked for the blessings of heaven on the meeting and the meal. Shar Heitkotter brought her usual infectious sense of humor to Horseplay while Richard Brown collected fines on behalf of St. George Musical Theater.

President Jeff Morby reported on Don Dunham’s condition following two strokes last week resulting in several days in the ICU at Dixie Regional Medical Center followed by time spent on the nursing floor. It is anticipated he will soon be moved to a rehab center. Cards and visitors are very much appreciated by this longtime and popular Rotarian.

Steve Davis, Chief Operating Officer at Rainbow Sign and Banner, has been proposed for membership by Jim Coleman. Any comments relating to this proposed membership should be directed to any member of the board.

Paula Bell announced the upcoming Soup-N-Bowl fundraising event on behalf of the St. George Arts Museum. Tickets are available from Paula for the event which will take place on March 6.

As one of 535 DGE’s, Gil Trujillo called his recent training as the upcoming Utah District Governor "the most awesome week of my life!" He announced the theme for 2009-10 as "the Future of Rotary is in Your Hands" and shared his excitement about the recent donation of $255 million from the Bill and Melinda Gates Foundation to help eradicate polio from the earth. This most recent donation is in addition to $100 million donated last year by the Gates Foundation and matched through contributions from the worldwide society of Rotary.

Richard Isom showed off the completed and ready-for-sale DVD highlighting the Dixie Rotary Bowl, including the game between the Vikings of Western Washington University and Orediggers of Colorado School of Mines. The DVD, which contains some never-before-seen footage and special features, is on sale for $19.99. Members of SGR can pick up their copy at a discounted rate of $10. 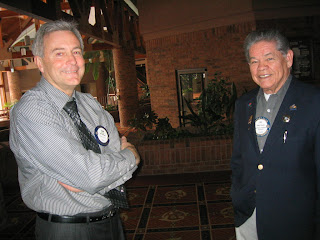 PROGRAM: Dan and Cindy Strobell shared their 2008 adventure in Guatemala where they helped build two homes, a school and installed 75 stoves to reduce the incidence of smoke inhalation deaths among Guatemalan women and burns among their children. Dan and Cindy, who have created the La Casita Foundation, believe the stove project is one more way "Rotary can change lives" and encouraged members of SGR to consider traveling to the central American country sometime in May, 2009. The cost - which includes airfare, accommodations and food - is approximately $2500 per couple. See Dan for more information about this life-changing experience.
Posted by Linda Sappington at 8:39 PM No comments:

Jack Petersen, one of SGR’s new Sergeants-at-Arms was on duty greeting Rotarians and others visitors to the 3726th regular weekly meeting of St. George Rotary. Ray Robinson lead the SGR Choir in the patriotic "America." Stan Gubler invited members to follow him in the Pledge of Allegiance and Eldon McArthur asked for the blessings of heaven on the meeting and the meal. Greg Basso took a turn at Horseplay while Richard Brown collected fines on behalf of St. George Musical Theater.

Steve Davis, with a classification of Chief Operating Officer, has been proposed for membership by Jim Coleman. Any comments relating to this proposed membership should be directed to any member of the board. 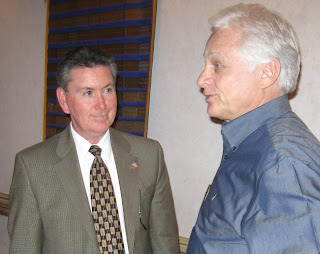 PROGRAM: Linda Sappington introduced Scott Hirschi, Washington County Economic Development Director. Hirschi, a former Washington County Commissioner and chairman of the Habitat Conservation Plan to protect the endangered desert tortoise, is now involved in efforts to bring valued-added companies to the area. According to Hirschi, value added companies are non-competitive with local businesses, have higher wages - in some cases 15-18% higher than the state average - and, "produce here, but sell to the world!" Hirschi noted, "Washington County has a reputation for being somewhat isolated from the world - a bright spot in a troubled economy!" As a strong proponent of the Lake Powell pipeline, he hiked and biked the entire 160-mile length of the project alongside Lin Alder, who is solidly opposed to the pipeline. Along the way, the two leaders met with community leaders and others in dozens of meetings to discuss the pros and cons of the project. The Lake Powell pipeline could deliver approximately 90,000 acre feet of water - "the true wealth in a dry land" - by 2020 to accommodate the community which has sustained a 6.2% annual growth since 1965. Alder’s argument is that "the feds won’t pay for it and we can’t pay for it by ourselves." Hirschi admitted "there will be some magnificent construction challenges and we aren’t even sure the Kaibab tribe will allow the pipeline to cross over land they consider sacred. In the end, the argument is all about growth vs. conservation." For more information, call Scott Hirschi at 652-7750.
Posted by Linda Sappington at 7:15 PM No comments:

Jack Petersen, acting Sergeant-at-Arms was on duty greeting Rotarians and other visitors to the 3725th regular weekly meeting of St. George Rotary. Ray Robinson lead the SGR Choir in the patriotic "America, the Beautiful." Our very own Flag Man Lee Warren invited members to follow him in the Pledge of Allegiance and Nick Lang asked for the blessings of heaven on the meeting and the meal. Don Pendleton took a turn at Horseplay while Bob Miller collected fines on behalf of St. George Musical Theater. 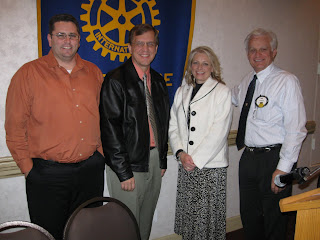 President Jeff Morby expressed thanks to Reed Noble and the Nominating Committee including Byron McLeese, Ken Sizemore and Nick Lang. Linda Baker was selected as president-elect nominee. Jerry Rasmussen and Bill Fowler were elected to the board. Thanks to Phillip Hall, Terence White, Kyle Case and West Martin, all gracious candidates willing to give "service above self" in "one of the tightest races I have ever seen in Rotary," said Reed.
Ray Robinson announced an extension on Youth Exchange applications to mid-January. In previous years, SGR has hosted many outstanding students, but this is the first year we have not had an exchange student, nor has one been sent out from southern Utah.
Gil Trujillo reported on the January 6 All Clubs Luncheon in Salt Lake City. According to Gil, former RI president Frank Devlin from Mexico City gave an excellent presentation. The event also honored major donors to Rotary - and southern Utah favorites sons - T. Robert Cochran and Sterling Spafford - both who have contributed substantially to Rotary International over the years.
Ken Sizemore reported he has collected 28 Member Satisfaction Surveys to date. He is pleased with the results from data gathered and believes the information provided by members will help guide the future of the club. 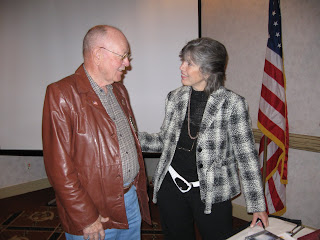 PROGRAM: Karyne Richardson-Meads, Director of Education for the Institute of Sound Health and Integrative Medicine was the speaker on the subject of Brain Health. The 2007 Pioneer Grant winner, Richardson-Meads represents Posit Science in Utah and Nevada. Posit Science takes a distinctive approach to brain fitness by carefully targeting the important roots of memory and thinking. The 12-week computer-based programs improve the brain’s reception to help students communicate more effectively, pick up details in conversation and remember what they hear. For more information, call 673-5599.
Posted by Linda Sappington at 7:34 PM No comments:

Bob Bramlage, Sergeant-at-Arms and Jack Petersen greeted Rotarians and guests to the 3724th meeting of St. George Rotary Club. Ray Robinson lead the SGR Choir in a song dedicated to "Tootsie, Wootsie." Lee Warren invited members and guests to follow him in the Pledge of Allegiance. Lee Sheets asked for the blessings of heaven on the meeting and the meal. Don Pendleton conducted a spirited Horseplay with Don Dunham collecting fines on behalf of St. George Musical Theater. A motion by Les Stoker to fine BYU fans only when they win was seconded by Ray Robinson. A vote by members present was unanimous in the affirmative.

Announcements: Nick Lang, a member of SGR’s Nominating Committee, announced the roster of candidates for 2009-10 including Linda Baker and Phil Hall for president. Bill Fowler, Jerry Rasmussen, Kyle Case, Terance White and West Martin are all candidates for service on the board.

Program: President Jeff Morby introduced Richard Isom, assistant director and owner of Bright Ideas Graphic Design, who reported on the success of the recent Dixie Rotary Bowl. Jeff Morby, who chaired the Jr. Rotary Bowl for the past three years, expressed his enthusiasm for his association with young athletes. "This has been a great opportunity and I love being called ‘coach!’"

Richard expressed his appreciation for "our wonderful sponsors" awarding them each with a red t-shirt. According to Richard, "it has been a tough year though we actually had about 750 out-of-state visitors - compared to 500 in 2007. Each spent an average of $151 a day for their 2-3 days in town - "although I think it was much more!" - for a total of $380,000 added to the local economy. And, thanks, too to the Center for Media Innovation at Dixie State College who has created a souvenir DVD, launched a new and improved DRB

website which has doubled the number of visits to the website. A weekly e-newsletter was also introduced this year along with the first ever "Big for A Day" event which brought team players together with local kids involved in the Big Brothers/Big Sisters program. "We collected money and canned goods at the 23rd Army Band Concert and donated funds to local high school band programs," said Richard. "Overall a great time was had by all! We received great comments on outstanding events and we will build on this year to improve on the Dixie Rotary Bowl weekend next year!"
Posted by Linda Sappington at 8:40 PM No comments: