Baker Named Rotarian of the Year 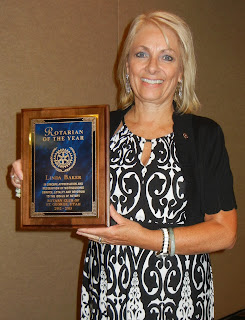 Linda Baker, vice president of the southern region of Workers Compensation Fund, was named 2012-13 "Rotarian of the Year” from among the 60-members of St. George Rotary Club.  An employee of WCF for 38 years and a longtime member of Rotary, Baker was chosen for this honor, in part for her efforts as SGR’s foundation chairperson and for chairing a successful Christmas holiday fundraiser.  President of St. George Rotary Club in 2011-12, Baker was also honored for her tireless support of Rotary International’s youth exchange program since joining the local service club in 1996.

This year, two of ten exchange students in the Utah Rotary District -one from Taiwan and one from Spain - lived and attended high school in the Washington County School District.  Baker made certain these students took part in mandatory youth exchange programs in locations around the state including Bear Lake, Tooele, Moab, Park City, SLC, Ogden (for district conference), St. George, and Lake Powell.

Congratulations on a well-deserved recognition for Linda Baker, Rotarian of the Year!
Posted by Linda Sappington at 4:04 PM No comments: 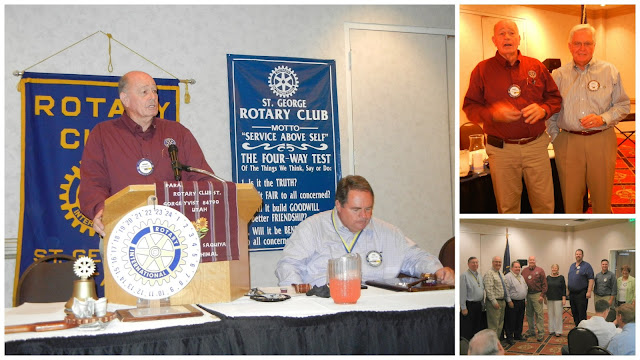 
Prior to passing the gavel, Hall noted how the informal leadership style of his board had resulted in several positive changes to the club’s structure and programming, including reorganization of board assignments, review and update of club bylaws, successful grant writing, stronger youth programs and additional boots on the ground for the Guatemala stove project and other  service in that country.
McArthur, who reminded club members he is “a better writer than I am a speaker,” is an emeritus natural resource scientist who returned to his hometown in 2008 after a successful career with the research branch of the USDA Forest Service, mostly at the Shrub Sciences Laboratory on the campus of Brigham Young University.  A past member of four Rotary clubs from a dedicated Rotary family, the new St. George president considered himself a “back bencher” in some of his previous service but promised to step up.


McArthur pledged to follow in the distinguished footsteps of his father and two of his three brothers, all who previously served in the club’s top spot and other outstanding club presidents.  His late father Eldon also served as Utah Rotary District Governor in 1986-87.


The new president will be assisted in his duties by board members:  Secretary-Treasurer Richard Isom;  President-Elect Bette Arial who will manage  youth activities and functions; Linda Sappington who will be responsible for public relations; Janet O’Riley who will manage club administration;  Collin Davis who oversees  fund-raising;, Sheldon Banks who will oversee service activities.  Phil Hall will continue in a leadership role as chairman of the club’s foundation and immediate past president; and Nick Lang will be responsible for membership activities.
Posted by Linda Sappington at 11:10 AM No comments: